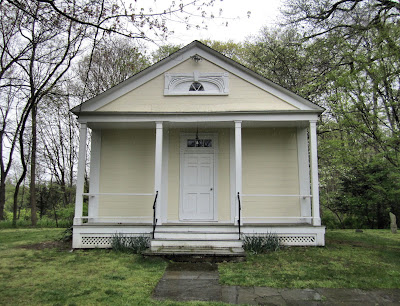 Oh yeah, that's another old schoolhouse. Adams Academy, Westport. I made a movie there once for a school project, back when video cameras were roughly the size of sewing machines and if you weren't rich you had to rent one at the video store.

I looked up Adams Academy and the first thing I found was a page on the town's Historical Society website. It was about an event at the schoolhouse promoting a new book, called Westport, Connecticut - The Story of a New England Town's Rise to Prominence. (Ed note: Ick.) The website explained that the Academy was started by a graduate of Yale, not uncommon for early Connecticut schools, and mentioned the classical curriculum. But then it felt the need to tell us that not only did "the majority of" the students go on to attend Yale, but that "many" of them "went on to attain fame and fortune."

I've read about a lot of old Connecticut schoolhouses. And until this exception, not one of these accounts has deemed the percentage of the school's graduates who attended Ivies or got rich to be a salient fact.Just one of those "Stay Westport, Westport!" moments. Brought to you by a schoolhouse built in 1837.

Posted by Johnna Kaplan at 9:43 AM