What, These Old Things? 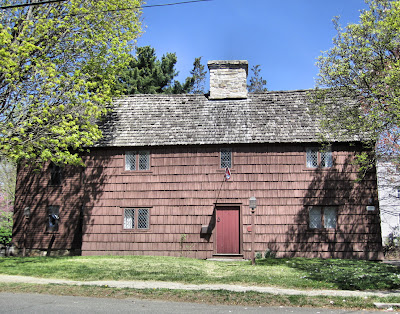 This is the John Wheeler House in Black Rock, the oldest surviving house in Bridgeport. It was built in 1720, or possibly before, though 1720 seems to be the safe, agreed-upon date. The Wheelers were big around here; Thomas Wheeler, the area's first white settler, arrived in 1644.

What was then a trading settlement is now a pretty neighborhood near the water. I recall years ago people used to scoff if someone said they lived in Black Rock. Like "yeah, okay, you live in Bridgeport, poser." But seeing as the name was in use back in the 17th century, perhaps the scoffing was unfair. The area has changed quite a bit since the late '90s and early '00s, when my friend and I would occasionally find ourselves in Fairfield County, wonder what to do about it, and end up drinking margaritas at Taco Loco. (Happily, Taco Loco is still there. Its shaky-looking plastic walls have not yet been gentrified away.) Back to the Wheeler house. It was originally smaller, and has been modified over the years. And it's hard to see because the wind has furled it up, but I think that's a British flag on the pole above the door. Which adds a touch of Colonial era cred.

I wasn't even going to blog about this house but I felt I had to because I followed up on my post from last week and found the oldest house in Norwalk. And, well... 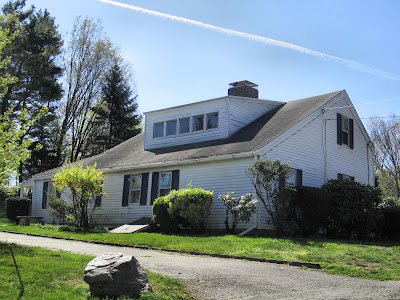 This is it. Really disappointing, right? The Thomas Hyatt House was constructed in 1677 but obviously changes and additions over time mean that if you miss the plaque - which you can't see from this angle- you'd never know it. It looked so anti-climactic I thought I had to show another historic house along with it. And then, while I was at it, I decided to add something even better than a house: 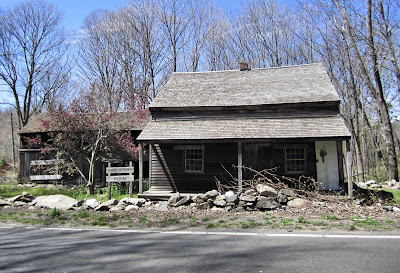 A c. 1790 Post Office in Weston. One of a few early Post Offices in the town, it became the official P.O. in 1883. It was also a general store. And there's a sign out front that indicates it is, or was at some point, a museum. The only evidence of this that I can find was that a museum was proposed for the site in the 1980s. But who knows? If you told me to guess which town had a secret museum that was reserved for the select few, Weston would be a good candidate. And anyway, what it is now is so much less interesting than what it was then.

Posted by Johnna Kaplan at 8:11 AM