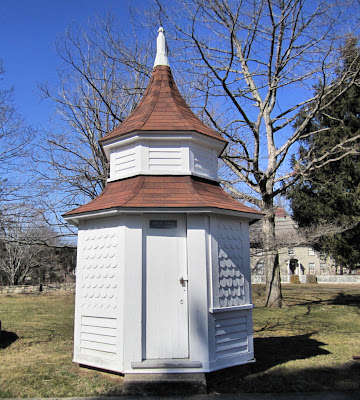 Growing up, I spent a lot of time in Stratford. Unfortunately it was mostly just in the office of a Stratford orthodontist. I wore braces for many, many years more than anyone should have to. Long after all my classmates had had theirs removed and were prancing about smiling like normal people, I was still placing little mini-rubber bands in my mouth and traveling frequently to Stratford to have my teeth painfully wrenched into straight lines. I was only able to have the braces at all because a relative of mine, who'd been an orthodontist in western Canada, once helped out another young would-be orthodontist. That man then moved to Stratford and had a son who also became an orthodontist and was willing to do my family a favor in return. If not for that most random of geographical coincidences, I'd probably have teeth that didn't even form rows, but just sprouted out haphazardly at crazy angles from all over my gums.


Anyway, despite the hours I racked up in Stratford in my youth, all I ever saw of the town itself was the distance between the exit ramp off I-95 and the orthodontist's reclining chair. And I think I thought that's all there was.


But land sakes alive was I wrong, because Stratford boasts one of the most surreal places I've been to in all of Connecticut. The little white structure above is a 1908 trolley station, and it's one of the more normal buildings you encounter at Boothe Memorial Park. 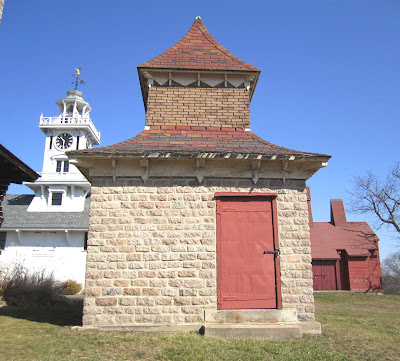 They are mostly all clustered together, making it difficult to think about one of the styles or eras represented without being instantly distracted by another one. Brothers David Beach Boothe and Stephen Nicholas Boothe basically began collecting all the weirdness they could find and amassing it on their property in the early 1900s. The whole thing was left to the Town of Stratford in 1949. I found it all sort of too much to deal with in a mature, adult way, and instead took to dashing back and forth between the structures and generally laughing at their absurdity like a six year old.
The full name of the place is Boothe Memorial Park & Museum. The museum part was closed when I went, but for the easily amused, the grounds are entertaining enough.

This claims to be the "oldest homestead in America," on the grounds that the c. 1840 house was "built on the foundation of the 1663 house, and continuously occupied." That seems a little dubious to me, but who cares: the site is undoubtedly historic, and in a state where historic is commonplace, it's also something less expected: wacky. 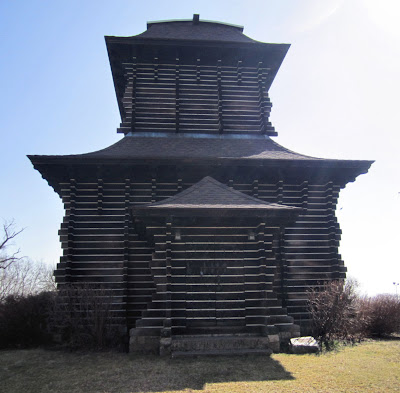 Take this, for example. This is the "technocratic building" (the plaque calls it the "technocratic cathedral" and notes that it was built c. 1932 out of redwood that was shipped through the Panama Canal.) What exactly "technocratic" means in the context of 20th century architecture (or anything else) I can't tell you, because I'm still pretending to be six. 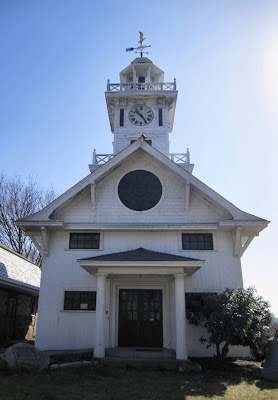 This is the Clocktower Museum. The plaque says that "in 1913, this 1830s haybarn was topped with a clocktower which was acquired in Massachusetts by the Boothes in exchange for a carpet sweeper." As one does. 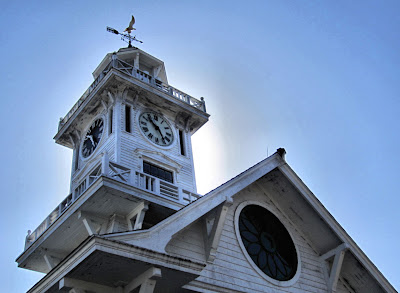 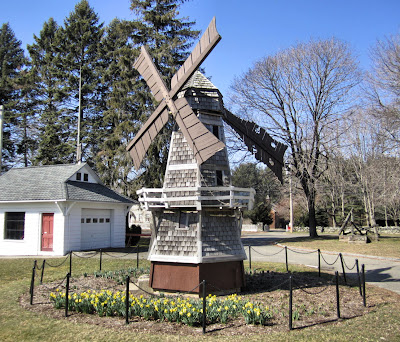 There is, of course, a windmill, because...why wouldn't there be a windmill. 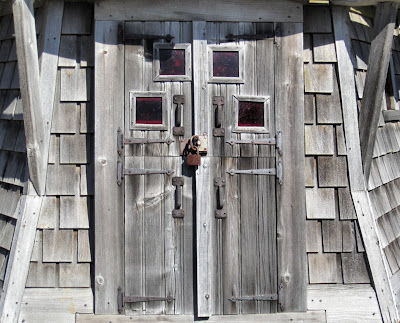 It has a little padlocked door. 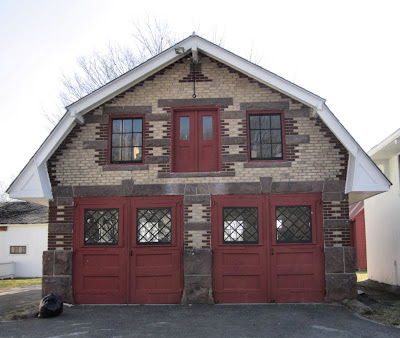 This is the carriage house, I believe. 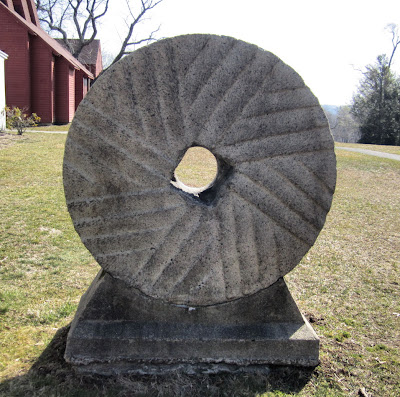 There are several millstones, and other assorted old stone equipment, placed about the lawn like statues would be in other parks. By the time you get to them, they seem perfectly normal. 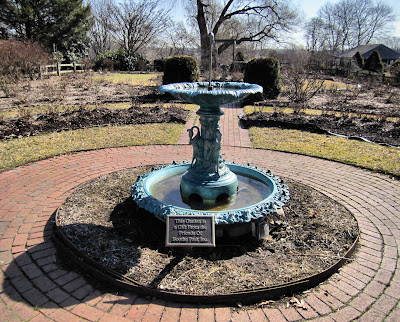 There's a rose garden too, pretty even in its dry, empty off season. 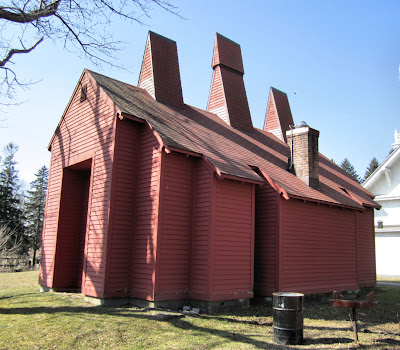 And a 1930s blacksmith's shop with 44 sides, which has to be an unusual thing in a building. 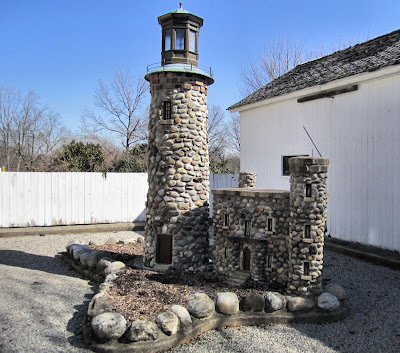 There's a replica lighthouse, which seems to have been built for a tank of six-foot goldfish. 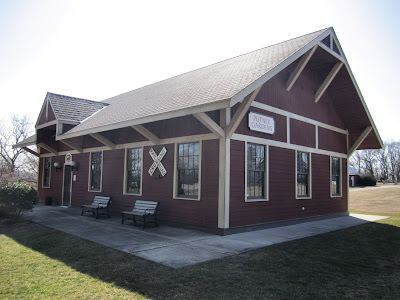 And a little railway station which is, in fact, the home of the Boothe Memorial Railway Society and (I looked in the window) full of model trains. You don't have to be at all interested in model trains to be impressed with the amount of model train paraphernalia it takes to fill a whole small building. 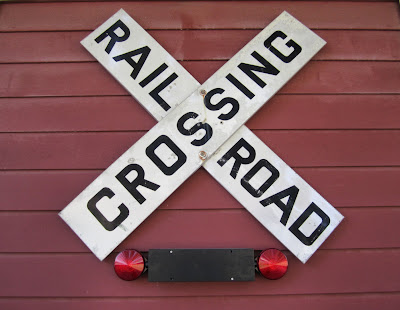 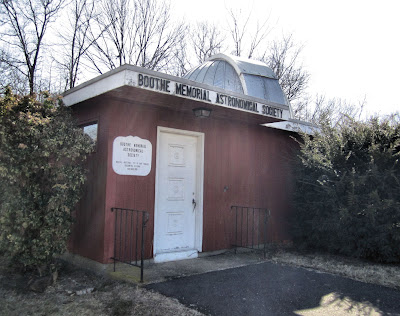 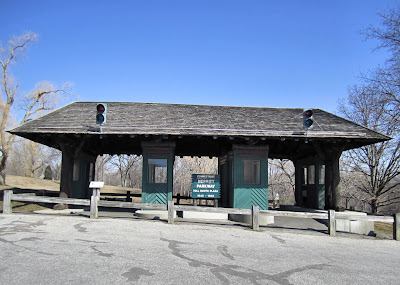 And a defunct toll booth from the Merritt Parkway, when it used to have toll booths. (Who knew it had toll booths?!) 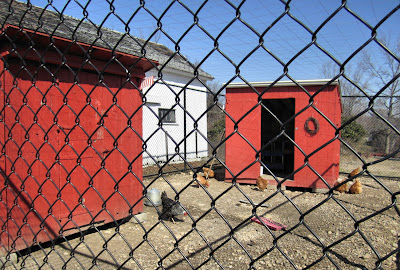 And some chickens. I guess just because...hey, chickens!

That's not even all of it. 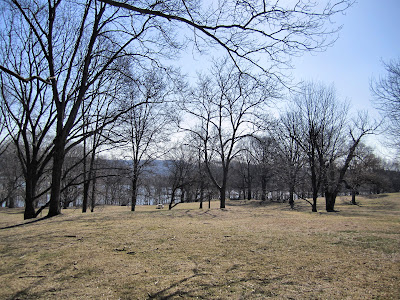 And oh, yeah, the whole thing sits on 32 acres of lovely open space on the Housatonic, with picnic tables and children's play equipment and trees. Which would probably be notable all on its own, but which is an afterthought compared to all the rest of it.

Boothe Memorial Park is located in the northern part of Stratford, so unlike when I used to go to the orthodontist all those years ago, I took the Merritt. This meant that my return took me right past the headquarters of Sikorsky, outside of which is a large helicopter. Now, if I'd only seen that helicopter, perched where I least expected it, I might have been momentarily taken aback. But at that point I was inured to strangeness. "Oh, there's a helicopter," I said, and I drove on.
Posted by Johnna Kaplan at 8:35 AM