I left Killingly and drove into Putnam and another whirl of Federal Writers' Project-induced confusion. There was supposed to be an old cemetery, and a Green with an 1818 Congregational church ("its three front entrances topped with semi-circular fan-lights...it is a pleasing composition...") and a tavern built in 1786 where local farmers had planned the financing and building of a sloop which was sent to Providence in sections and "engaged in the West Indian trade for many years." But these things weren't there. There was a cemetery - as I knew from living around here, there were several. But Putnam had no real green, and certainly not one with a church and landmark tavern. Buildings are moved, yes. Places change, things fall apart. But this was Connecticut. If there's anything we don't mess with, I thought, it's Congregational churches, taverns, old cemeteries, and town Greens.

Thoroughly puzzled, I gave up and proceeded to downtown Putnam, "named for Israel Putnam, Revolutionary hero," a "manufacturing center composed of narrow, winding streets and low buildings, on four small hills." When I first saw Putnam years ago, I thought it looked like one of those towns perched perilously on the rugged hills around where Pennsylvania meets West Virginia meets Ohio. (Which some would have intended as a slur, but I did not: shortly after that, I moved there.) The town was once an industrial and shipping center, situated, like Plainfield, on intersecting railway lines between major cities. "Although it has suffered during the depression," my Guide said, "Putnam is still a thriving little community." 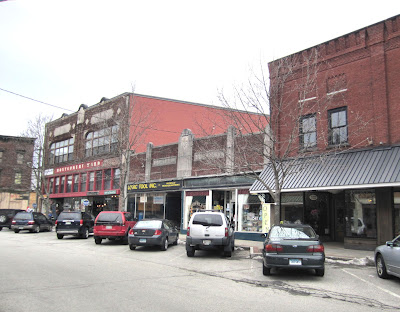 And in its own way, it still is. It has suffered again since the depression, but it seems that Putnam always bounces back. Not to what it was in its shipping, silk-thread-making heyday, but to something else. Trains no longer stop here, but tourists do. Putnam today is antiques bazaars that overwhelm you with their sheer tonnage of disparate stuff, and sweet outdoor cafes, and calming river trails. But none of its industrial past has been erased. As I looked for the Roads, Lore, and People version of Putnam I didn't take pictures of the mill buildings, now mostly offices, or the Quinebaug's rushing Cargill Falls ("one of the most beautiful in Eastern Connecticut.") I thought I'd taken lots of those already, and that this blog was already too full of them. Later I realized I'd never written much about Putnam, and my imagined lots of pictures were really just a little. 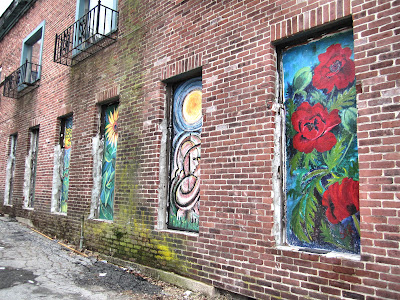 Instead I only noticed new things, like these flowers blooming in a wall of brick, which belonged neither to the Putnam of my recent memory nor the Putnam of the old days. Which was just as well, because the book's Putnam seemed to have vanished. "Quinebaug Pines State Park," for example, "formerly called Priests' Island," a "thirty-six-acre islet, reached from the mainland by a suspension footbridge." Gone. And I had no idea where it might once have been. "The Masonic Club, occupying a building which was a station of the 'Underground Railroad' before the Civil War"? Also gone, also without a trace. 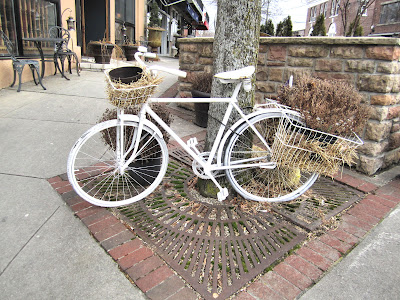 In the stop on the tour that I knew best, I was the most lost. 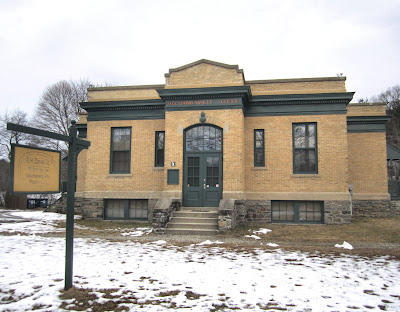 I continued on my route, following "the Quinebaug River through valley lowlands" and the water shimmered blue and cold by the side of the road. "The highway" - that's how the Guide refers to Route 12 - "passes through Mechanicsville (Town of Thompson) on an uneven hillside." This had been a "busy village" in 1938, though "important only for its textile mills." Now, in a strange reversal, I was seeing things that the authors of the book had not, like the empty Mechanicsville School building. I was on their Tour, yet I felt I'd somehow left it, as if the time that intervened between their era and mine had shifted the geography slightly but irrevocably beneath my feet. 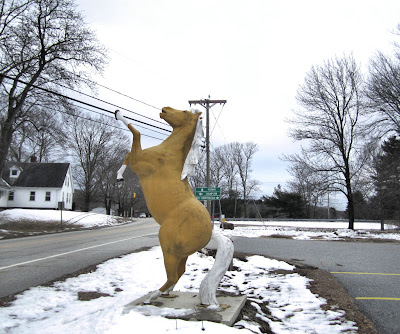 And apropos of nothing, but just because I'd always thought it looked so utterly out of place, I stopped at the yellow horse statue. Which I was almost sure had not been here in 1938, or earlier, and which signified nothing except "here is a the parking lot of a Mexican restaurant," and "This is America, land of the free and home of random tacky things by the side of the road."

At this point my guidebook also took a turn for the random, and I turned onto a crossroad hoping that the next stop it mentioned was still around. I knew, sadly, that there was almost no chance of actually coming across the "Russian Bear, which retains an odd brick smokehouse and is now operated by a group of expatriate Russians." But I had to at least look. Finding nothing but houses, I moved on to the center of Thompson. 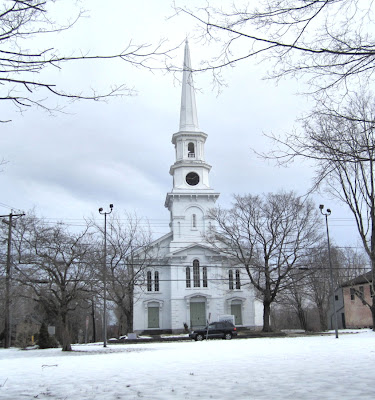 "Thompson is a quiet rural settlement of well-kept country estates and gleaming white or butter-yellow houses along shaded streets." The Green, which was currently blanketed with snow, "was a militia training ground on which eastern Connecticut troops were mustered in 1775 at the Lexington alarm." Physically, at least, It didn't appear that very much had changed in Thompson since then. The houses were somehow massive, and gleaming even, without being ostentatious. And the buildings (including the inn that was once the Vernon Stiles tavern, where "Thomas Dorr, illegally elected Governor of Rhode Island, instigator of Dorr's rebellion (1841) in which his followers attempted to seize an arsenal...was in hiding when pursued by Federal agents, and evaded capture by use of the complicated series of stairways") were pristine. This was pure New England, distilled, bottled, and carefully doled out from a dropper. This was how Litchfield County imagined itself in its own mind. It looked like there was a local ordinance against messing up the snow. 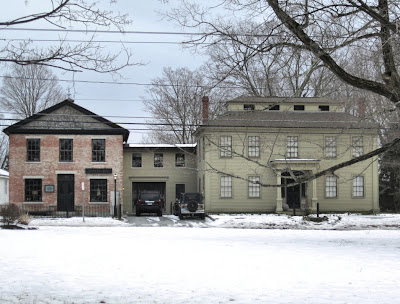 The genius thing about Thompson was that there seemed to be no public parking. I'd never encountered a town Green with no parking spaces around it, but it seemed I'd found one. You could only stop and appreciate Thompson if you lived in Thompson, and were able walk to the center of the town from your beautiful butter-yellow house. No wonder it was pristine. 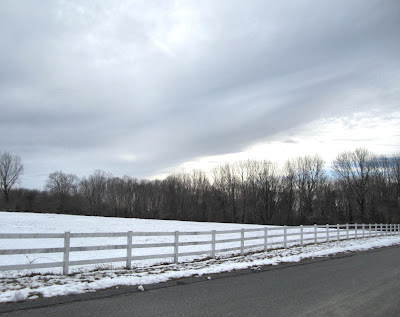 The road where the Russian Bear once was led from Thompson back to Putnam. I turned down it one more time, just to be sure. It was mid-afternoon but the sky was streaked like impending nightfall. I had nothing to look for anymore, so I just looked: at snow, at the winter trees, at this place I'd lived so close to and never explored. 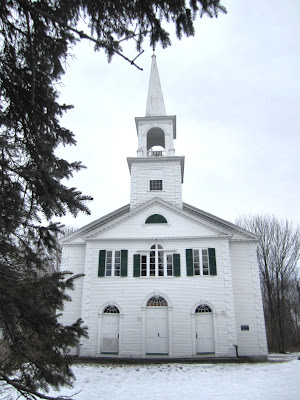 And then I saw a church. It had no sign; it had no parking. It had no meaning to me, yet I stopped. It was something I knew. "Its three front entrances topped with semi-circular fan-lights...it is a pleasing composition..." This church couldn't be that church, that missing 1818 church from the missing green. Could it? Why had the guidebook writers placed it there, when it was really here? Perhaps "there" was here? Or perhaps they were two different buildings after all.

That was a sort of a perfect ending. But this was not the end. Technically I had about five miles to go until the Massachusetts border, and three more mill villages, all within the town of Thompson.

I'd been to Grosvenordale, which I hadn't realized was a place separate from North Grosvenordale, and taken a picture of its crumbling mill, which I hadn't known was a mill then. Grovenordale, my book told me, was an agricultural settlement until 1863, when "Dr. William Grosvenordale, industrialist" brought in new machinery from England and enlarged the existing small mill. Apparently, at the time the Guide was written, the Grosvenordale Company Mill was still manufacturing textiles.

And I'd been to North Grosvernordale too. I wrote about it on this blog, in fact, and I doubted that if I went back now, I'd come up with anything better to say about it. The Guide had very little to say about it compared to its southerly counterpart, which was strange because it is, at least today, a much more substantial village. Its mill still stands - that's it in the in the link above - and has been turned into offices, or apartments, I can't remember. It has restaurants and a park, and a church with "an unusual stone grotto and Shrine of St. Joseph...a copy of the shrine of Our Lady of Lourdes in France" which I'd also seen but not understood.

And then there was Wilsonville, just before the Massachsetts line. At this point I had no desire to seek out Wilsonville, which three-quarters of a century ago had been a "small mill village composed mainly of old gray company houses." The Federal Writers' Project writers couldn't seem to muster any particular enthusiasm for Wilsonville, and I couldn't either. Maybe, I thought, humoring myself, they'd secretly decided not to go there too.
Posted by Johnna Kaplan at 8:59 AM