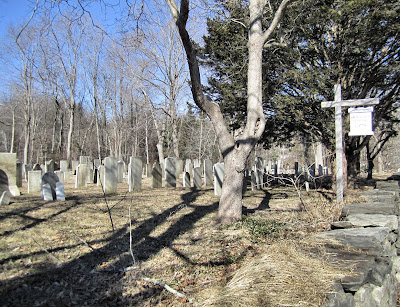 I was thinking about towns within towns, names that have lost their places. I was thinking of Aspetuck, which I'd found out about on the FWP Connecticut guide's Tour 1B. The farm stand in that post is the Aspetuck Valley Apple Barn, and I'd seen an Aspetuck Cemetery too. I'd learned it was a village, one of those pesky "unincorporated" places, located in Easton and Weston; that it's on the National Register of Historic Places for its 18th and 19th century architecture and its landscape, characteristic of early agricultural communities; and that Helen Keller had lived there. 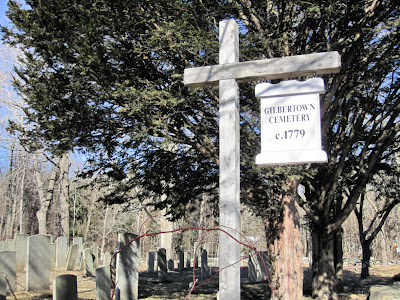 But I found something else, a town within a town within a town. Gilbertown, of which only this cemetery remains today, was a section of Easton inhabited largely by the Gilbert family. It wasn't really a town, or even a village; as far as I can tell it was considered part of Aspetuck. 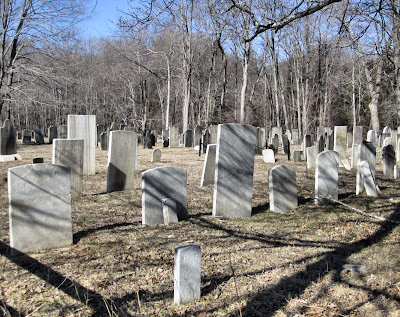 I didn't go traipsing through the cemetery like I occasionally do because of time, and cold, and the fact that Easton always seems like it might (oh so politely) kick out outsiders looking at its stuff, especially if they're insufficiently well-dressed. So it's only from looking it up that I know some Revolutionary War veterans and leading citizens of early Easton are buried here. And it's only from standing in the cold for a moment reading that I know the tiny headstone standing alone in the foreground belongs to one R.T.
Posted by Johnna Kaplan at 12:37 PM