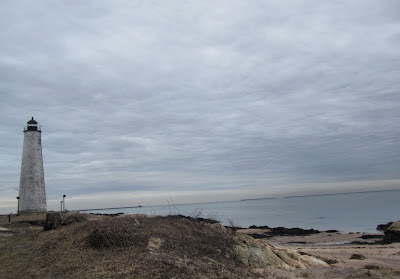 My need to start spending more time in cities again has not abated; the other day I spent hours pouring over the websites for different neighborhoods in Cleveland, of all random places. (In truth it's not really that random, and it started out as research for work before devolving into procrastination and large-ish city envy, but still.) My real life city-going, however, has still not been as committed as the virtual version. And even when I've been in urban areas, I've somehow managed to wind up in their least citified neighborhoods. See Lighthouse Point Park, New Haven. Getting there requires a little journey along the industrial jagged edges of the city - I do like edges - all bridges and concrete pillars and construction equipment and graffiti. 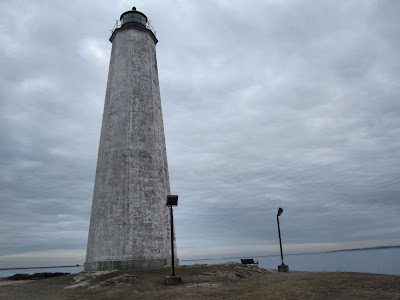 But once you're past that, and the land ends in a point on New Haven Harbor, the city is almost gone. It's a classic New England coastal scene, with few reminders of the bustling population center you've left behind. The New Haven Lighthouse dates from 1847; it replaced an earlier, wooden lighthouse. This one is made from local sandstone brick and granite. It's octagonal, as was its predecessor (apparently that's a Connecticut thing, who knew?) It no longer functions as a warning to ships on the Sound, though it helps civilize the appearance of the surprisingly wild-looking coast below. 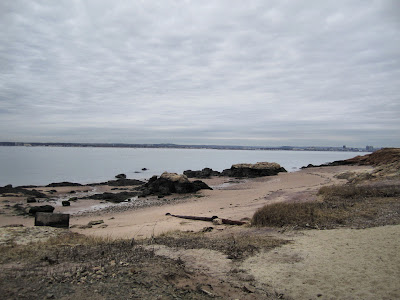 See? It's really a rather ominous little beach, I thought, like something from a moody, post-apocalyptic photo shoot. It would make a good wasteland of a backdrop for couture gowns and thick knit sweaters. 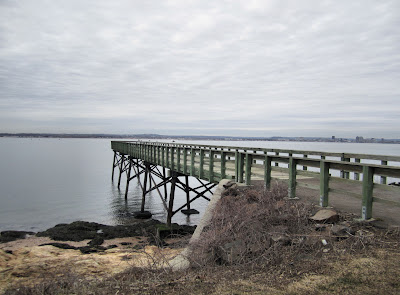 As would this lonely pier, that reaches out to West Haven across the water but doesn't make it. On the day I went there the park was a quiet, windswept place, empty but for a few dog-walkers amid the picnic tables and sideways-growing trees. It felt so calm and isolated that I was happy to learn that danger (or peligro, if you prefer) lurked just beneath the surface.
Posted by Johnna Kaplan at 2:40 PM