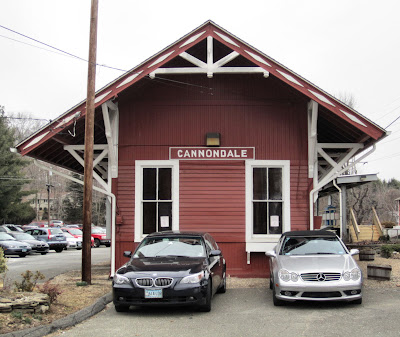 1. It's in Wilton. (Thanks for parking those cars there, whoever you are, you made this picture so much more Fairfield County.) 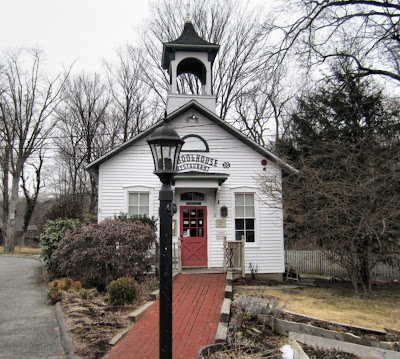 2. It consists of more than Cannon Crossing, the shopping center made up of cute historic buildings like the schoolhouse above, and the Cannondale station, which is on Metro North's Danbury Branch. People (not very many of them) still live in Cannondale; it's an honest to goodness Census-Designated Place. 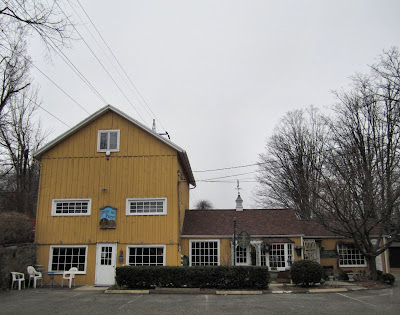 In her 60s Ms. Havoc ventured outside show business by creating Cannon Crossing, a Connecticut real estate venture that included antiques, crafts and gift shops and a restaurant in 19th-century buildings that she had restored. She sold her jewelry and other possessions to buy the eight-acre property, in Wilton, and declared it her greatest passion until she sold it in 1989.

Somebody seriously needs to make a movie about this woman. I barely knew any of this stuff, and I certainly would never have connected her with Wilton! 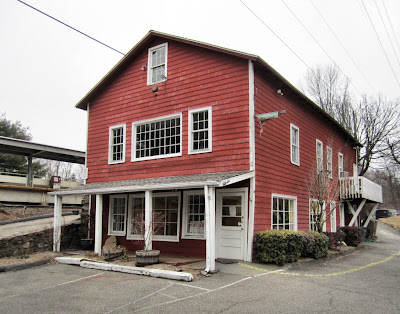 4. The Cannon name comes from the Cannon family, who lived here and opened a store in the late 18th century. The railroad station arrived in 1852 and a Post Office about twenty years later. The area was then called Cannon Station, or Cannon's Station, which was changed to Cannon, or Cannon's, then back to Cannon Station again. At this point people grew concerned that confusion might arise between Cannon and nearby Canaan, so in 1915 the Post Office officially began using the name Cannondale. There is no longer a Post Office in Cannondale, but the name finally stuck. (The part about Canaan comes from Wikipedia, though, so do with that what you will.) 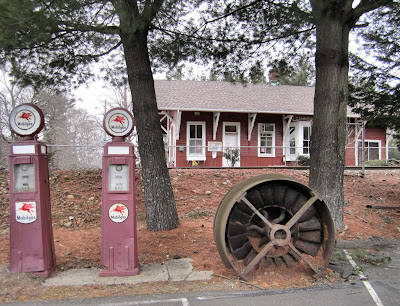 5. These gas pumps are not merely neat-looking, they're significant. They "convey" the "long-time commercial role of Cannondale."

Convenient freight access allowed the Cannondale store to increase the volume and diversity of its offerings, and the increased foot and wagon traffic around the adjacent depot represented a substantial increase in the store's share of the local market.


The turbine is significant too!


Freight access also stimulated a host of processing enterprises, of which scant physical signs remains except for the gristmill, dam, and the now-removed turbine which powered the mill. 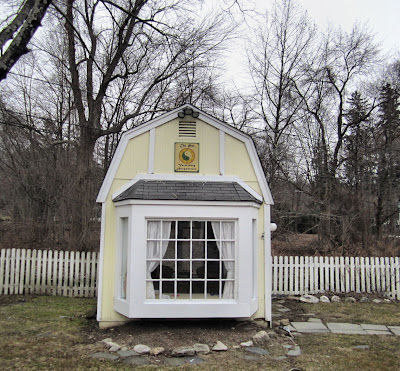 6. The area was originally called Pimpewaug, but the Wilton Historical Society says that was "fortunately changed" by white settlers in 1726. At that time white settlers had already been in the area for twenty years, though, so presumably they'd been calling it Pimpewaug and snickering into the cuffs of their poufy sleeves.

(They also would have been completely flummoxed by the business in this picture, which provides "Veterinary Acupuncture and Chinese Herbals.")
Posted by Johnna Kaplan at 10:07 AM