Tour 9 is my third attempt to follow a driving tour laid out in Connecticut: A Guide To Its Roads, Lore, and People, the Federal Writers' Project guidebook published in 1938. (Obviously, I'm not doing these in order. The first one I did is here, and the second is here.) Tour 9 is described as "From New London to Massachusetts Line (Worcester), 56.2 m., State 32 and State 12." (They liked their arbitrary italics in 1938 I guess!)

Though the tour starts in New London, it doesn't include much of the city, except the glimpse you catch of the Coast Guard Academy, a streak of dignified red brick, green lawn and symmetry, as you speed north up Route 32. This road "travels the same route as an old Turnpike, the first to be completed in America." It was built to connect the commerce of New London to the agriculture of West Farms (now Waterford.)

The Guide notes the neighborhood of Quaker Hill, "a residential section on a high bluff above the Thames," and correctly points out that the Rogerenes, the religious sect the area was named for, were not Quakers. (I've written a bit about the Rogerenes and Quaker Hill here.)

"Waterford spreads fan-like about New London," the book says, in what sounds like a sly insult, "a township without a community of the same name." But quite quickly, after a few of the promised "wide views" of the river, I have left Waterford and entered Uncasville, a village of Montville. The book calls it a "neat, prosperous village" manufacturing "silk and cotton fabrics and paper goods." Today it does not look particularly neat or prosperous, and there is no evidence of silk. I miss the crossing over the excellently named Oxoboxo Brook as well as the Uncasville Library, which may no longer exist. But I do see something very rare these days in America and perhaps especially so in Southern New England; something closer to the Depression-era itinerary I am following than the strip malls and Dunkin Donuts of Modern Montville: a hitchhiker.

Uncasville was named for Uncas, the 17th century sachem of the Mohegans who fought the Pequots (and others) and allied himself (mostly) with the English settlers in the region, using his remarkable political acumen to make his tribe (which hadn't even existed as a separate entity until a short time before) into a major regional power. I had noticed before, sort of, but I did not really see until now just how much here is still named for him. Perhaps it's because there are more buildings to stick signs on, and more streets to name, that there seems almost more of an Indian presence here than in the Plains or Mountain States, with their vast reservations.

I enter the village of Mohegan, which my book calls "a thriving Indian community, no longer a Government reservation, but still nominally governed by a chief called 'Malagah' (Leap Dancer), who rules over the 36 remaining half-breed members of the tribe." But that was a long time ago (see: government-sponsored publication using the phrase "half-breed") and the existence of the village of Mohegan, like Uncasville, is currently apparent mainly from the brown sign identifying it as the "seat of Uncas, the Mohegan sachem, friend of the English." But the Tantaquideon Lodge, a "small structure of native granite," and a museum, is right where the Guide says it is.

"About 200 yards from the highway on the blue-marked Mohegan Trail, is the Mohegan Congregational Church erected for the remaining members of the tribe in 1831...a Brush Arbor Ceremony has been held here annually in the latter part of August since 1860. Formerly green brush arbors were erected as temples to the gods of the harvest, and the Indians, forming a chain, danced through the temples..." There is no blue-marked Mohegan Trail anymore, that I can see, and by 1938 there was no more brush arbor ceremony. But I turn past the Tantaquidgeon Lodge down a little road and find the church. (The one in the picture above.) I don't know if the Mohegans of 1831 wanted to be Congregationalists; the book does not say. 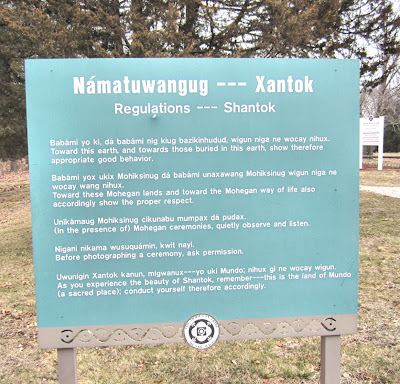 Some of what I am told to look for is either gone, moved, or hidden in plain sight among the modern town that has grown up along Route 32. I completely miss "the cellar stones of the Birthplace of Samson Occum, the first (1759) ordained Indian minister," said to be "in a large field." But I can't miss what was then the "Site of the Old Fort and Burying Ground," down a road marked "to Fort Shantok." This is now Fort Shantok Road, and the site is Shantok, Village of Uncas, on the Mohegan Indian Reservation. 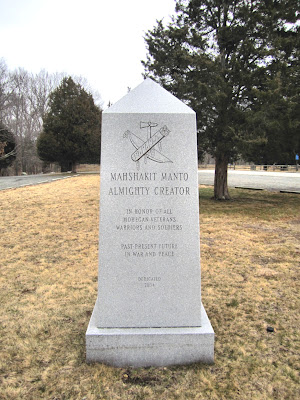 I was the only person there, in this cemetery-slash-monument-slash-historic village-slash-park with sweeping Thames views. Geese pecking at the grass watched me as I got out of my car and wandered. 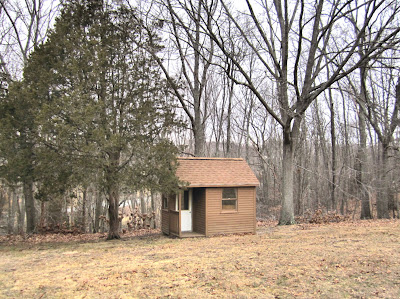 It was cold, and a harsh wind came and went. I kept thinking someone else would appear, or perhaps someone else was there already, watching me from one of the small buildings on the land. I did not need the signs to tell me to be respectful; somehow the chill air and the quiet and the earth, covered with leaves and moss and springy from a recent heavy rain, delivered that message. 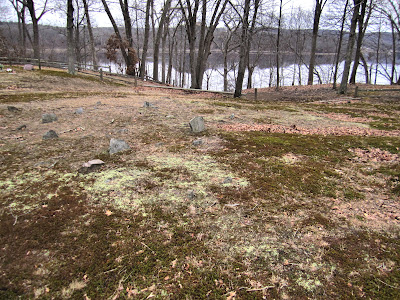 I paused on the height overlooking the river, careful not to step too close to any of the minute gravestones scattered beneath my feet. There were more recent markers, too, shiny ones with properly carved names, but I stared only at these more ancient ones. I remembered suddenly that I was standing in a sovereign nation, that this park spanned not just time but place.

Continuing north, "the highway climbs to the top of Trading Cove Hill. This district...abounds in Indian history, legends, and memorials." Several road signs still allude to Trading Cove, "where early settlers from across the river traded with the Indians." The trading continues, in a way, at Mohegan Sun casino, which rises like a shimmery apparition off to my right. Settlers from all over come to trade with the Indians still, not in skins and shells but in US Dollars and smoke-filled, shiny, tacky-luxury escapes. 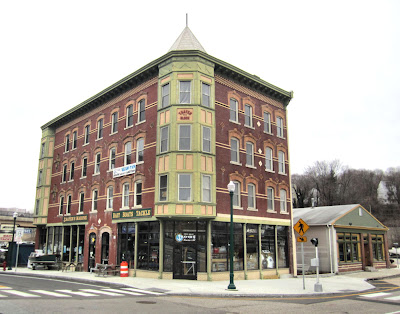 I kept going, past restaurants in odd little old buildings like something out of the Wild West, past crumbling broken-windowed ruins of mills or factories, to Norwich, at the confluence of the Thames, the Shetucket, and the Yantic. The Guide doesn't linger in Norwich, home of rose gardens, Benedict Arnold, FedEx packages you can't be home to accept, and some truly fabulous architecture. But I did, for just a few minutes. It's a strange-looking city - in a good way - and unique as Connecticut goes. The first time I saw it I almost wondered where this place had come from, that refused to look like everyplace else. 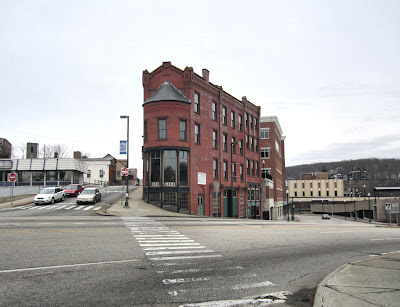 The funky attention-seeking buildings of Norwich deserve a post (or three) of their own, but until I have time to do that, you can ogle some of them at Historic Buildings of Connecticut. 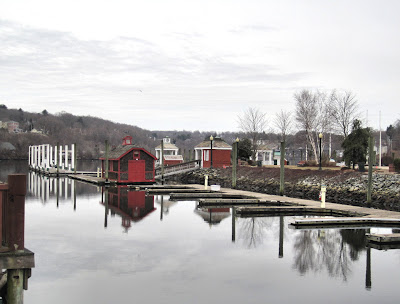 When I parked by the waterfront, more geese were watching me and a dirty swan was preening itself haughtily on the river. Every time I've been here, I've been the only person not waiting in an idling car. On this day I saw one other person who was not car-bound, walking quickly and talking loudly in Spanish into his phone. I walked quickly too, because of the cold, along the water to a sheltered little concrete space under a bridge. 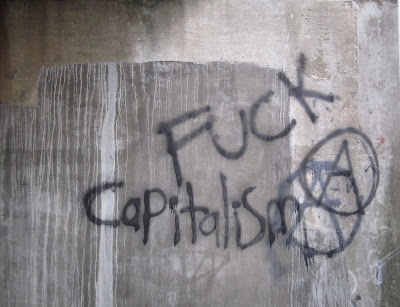 Norwich, the Guide says, is a "mercantile center" with a population of 32,438. Today it has only about 4,000 more than that. Norwich is where the Guide, and therefore I, leave Route 32 and continue on Route 12, through what the book calls "textile towns and villages of Connecticut where frequent mill failures have altered at least temporarily the socio-economic pattern." I wondered if that pattern had been not merely altered by the Depression, but set.
Posted by Johnna Kaplan at 10:05 AM