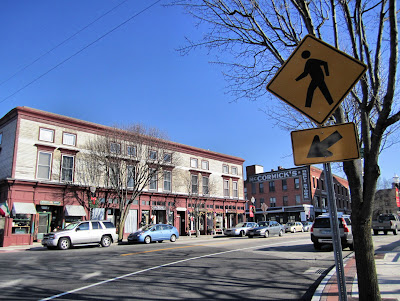 This is Pawcatuck, which is a part of Stonington - a part of Stonington I'd somehow never been to until now. Which maybe isn't that surprising, except that this is also Westerly, RI, and I have been there. (Not that I remember much. My only memory of it is the beach, and getting evacuated for a hurricane.) The border between the towns - and states - is the Pawcatuck River, which you can't see here but which runs beneath this street, which is a bridge. That sounds far more confusing than it is. Here: 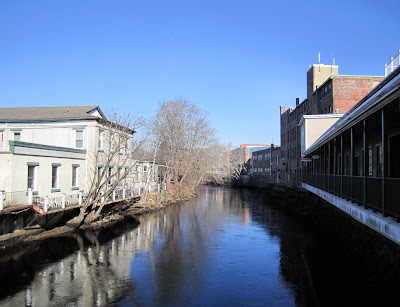 Rhode Island on the right, Connecticut on the left. OK, it's a little confusing. Mainly when you're driving and you find yourself on a one-way street that is sort of like a traffic circle but not exactly, and you're suddenly in the wrong state and have to go back around. And then you do it again. But it all works out very nicely, because it's such a peaceful border crossing.

The Rhode Island side looks much better, probably because it is. The population of Pawcatuck is about 5,500 and the population of Westerly is about 23,000, so right there you're going to have more stuff to do and places to go. Also, Westerly is much bigger: 74.8 square miles (a lot of this is water, but even so) vs. Pawcatuck's 3.7 square miles. Coming from the CT side, Pawcatuck functions as a sort of lure to draw you into Westerly. You have just a minute to recognize that you're heading into one of those pleasant downtown areas, full of tempting shops and restaurants (and they are always tempting, even though they're all faintly similar and despite the fact that you can't afford to shop at any shops and have no desire to go to any restaurants) when bam! You're on that one-way road and in Rhode Island whether you like it or not. (But you'll like it, because it's nice.)

My list of places I really must get back to is dangerously long, but Pawcatuck and Westerly are now added to it. Pawcatuck has a historic district, too, the Mechanic Street Historic District, centered around an old mill complex. The area looks interesting, though it may be hard to tell from the only picture I took there, of railroad tracks: 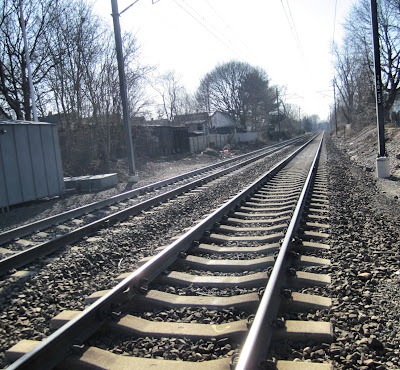 Railroad tracks always beg for pictures to be taken of them, like coastlines and oceans, and they're inviting for the same reason: they can take you anywhere. But for the same reason they also mostly look the same everywhere, and are perhaps not the exciting photo subjects they should be. Too late!

And, a quick note just to confuse everyone further: there is a Pawtucket, RI. Which is nowhere near this. Well, it's a little bit near, only because RI is so darn small. But it's in a whole other county at the other end of the state.
Posted by Johnna Kaplan at 8:41 AM