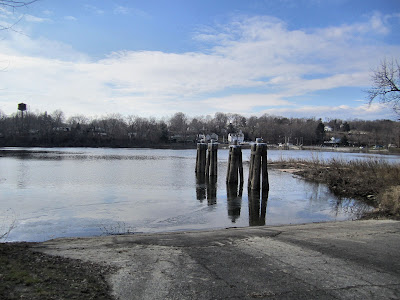 So far this month/year I'm not doing very well as far as going to more cities. And yesterday I ended up in the same town that made me want to get to more cities in the first place. But Glastonbury isn't just the home of the oldest continuously operating cider mill in the United States, they also claim the country's longest continually running ferry service. To quote from the historic marker at the location: "Since 1655, pubic transportation across the Connecticut River has been provided at this site, connecting the towns of Glastonbury and Rocky Hill, both formerly parts of the town of Wethersfield." The sign notes that the ferry has been powered variously by "poles, oars, a horse treadmill and a steam engine" and that the crossing time is four minutes.

The ferry isn't running now, in the winter, which gives this spot that wonderfully lonely off-season feeling. The road leading to the ferry slip is similarly evocative, passing through fields with views of red farm buildings and tobacco barns. There are weathered salt-boxes and pretty gambrel-roofed houses but there are new-ish houses too, with metal mailboxes lined up along the curb, that look like they were painted in as an anachronistic last touch in an 18th century landscape.

And, while I was standing in the mud by the riverbank, looking over at that water tower on the other side, I realized I'd been over there before. It was charmingly preserved-looking there, too, more watery than pastoral, and - I believe - not far from where I was going when I took this picture. Now that I've belatedly made the mental connection between the two towns, I'm tempted to go back. After some cities, though.
Posted by Johnna Kaplan at 8:14 AM