Oh yes. It's another thing-I've-seen-a-hundred-times-and-not-realized-what-it-is: Fort Saybrook Monument Park. This is at the end of Old Saybrook's Main Street, or rather the road Main Street turns into after it transitions from oh-so-upscale-yet-tasteful-downtown-shopping-district to that-road-with-all-the-amazing-old-houses-on-it. (Hmm, that also describes Guilford, Madison, and probably twelve other Connecticut towns I can't think of right now.) Anyway, it's just before the land runs out and you're forced to either turn around or get onto that beautiful-but-slightly-creepy-for-reasons-I-can't-articulate little causeway. The park feels a bit like a catch-all for Old Saybrook history, located at the site of the original fortification built by Lt. Lion Gardiner at the direction of John Winthrop, Jr., "governor of the river Connecticut."

The above large statue of Gardiner, complete with drawn sword and enviable footwear, is clearly visible from the road. But it's set too far back to tell from the car who he is or what time period he's from. I always feel, when I drive ignorantly past monuments like that, like I'm slacking somehow, like I'm in fifth grade and didn't do my homework. And then when I finally get out and look at them, I feel inordinately virtuous, as if I've done some good deed. Anyway.

Much of the park itself is slightly lower than the road and therefore almost hidden until you turn into the parking lot. 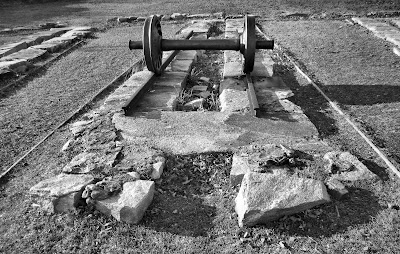 Where the trains were turned around at the end of the line on the old Connecticut Valley Railroad. (Not what I was expecting, I have to say.) The 1636 earthworks were demolished in the construction of the Railroad in 1870-71; today a low stone wall marks the site of the fort. Trains ran from Hartford to Saybrook Point, and took two to three hours. (Which sounds like forever until you look it up and discover it's exactly the same as it would take by Amtrak today, including waiting to transfer trains in New Haven. It takes about 50 minutes by car.) 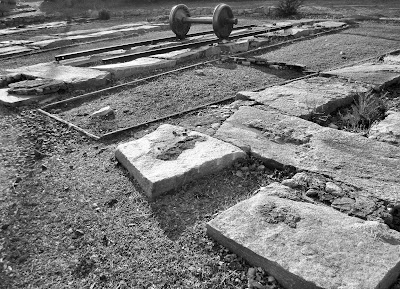 The small area devoted to the Railroad looks a bit like some old train equipment was placed in an ancient archaeological site to confuse the people of the future. 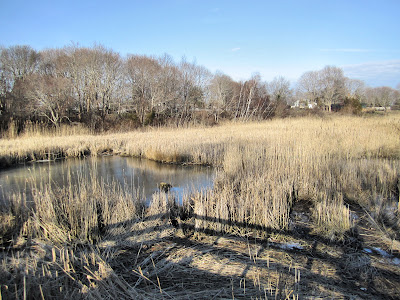 The park is 18 acres in total. From a wooden boardwalk, raised above the salt marshes where the Sound meets the Connecticut River, you can look out on tidal wetlands and sun-cast phantom fences.

One aside about Old Saybrook. I assumed, until relatively recently, that the name came from some misspelling of sea + brook. (Hey, close enough to the Sound and the River, maybe...?) But no! It comes from combining the names of two of the Plantation's English patentees, Lord Brook and Lord Saye and Sele. Which is sort of funny, though I can't say why. Maybe just because dude had an "and" in his name.

Another aside. Old Saybrook's website claims the town was "the [italics mine] site of" the Pequot War. Which is also sort of funny. I wonder what Southport thinks of that.
Posted by Johnna Kaplan at 8:18 AM