The Oldest House In Connecticut 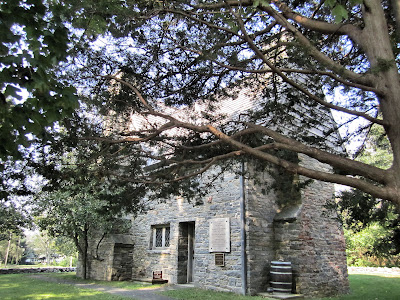 And the oldest stone house in New England, in case you were wondering. It's this: the Henry Whitfield House in Guilford, built in 1639. It's a museum now, but it was once the home of Reverend Henry Whitfield, one of Guilford's founders. It was also a fort. And by "also" I mean not at some other time in its history, but then, while the Whitfields were living in it. There were three others like it, where the other leaders of Guilford lived, but those are gone. It's a bit hard to see through the trees. It would probably have been better to take this picture in winter, or to stand in the middle of the lawn, which I was afraid to do. Guilford, after all, is the town where all Christmas lights must be white. So I wasn't about to mess with their lawns.
Posted by Johnna Kaplan at 7:40 AM