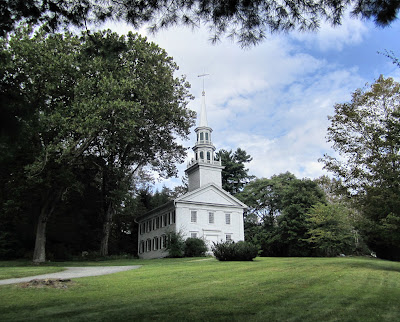 After the entertainment of Tour 1A, I decided to try Tour 1B: From Bridgeport to Junction with US 202. (I should probably go back and start with Tour 1, but it's so long. These little tours are easier to fit in when I only have a few hours.) But to start, I had to get to the place where "State 58 branches northeast from US1 at Bridgeport." 58, of course, is the Black Rock Turnpike, and getting to it involves that monstrosity of a multi-lane traffic circle where the Post Road and the highway and smaller, badly marked local roads strike out at odd angles. Then it runs up to the Merritt through a tacky-meets-affluent Chainstoreistan before reaching the promised "shady countryside." Then it passes the Samp Mortar Reservoir (I didn't know either) and the disturbingly large Hemlock Reservoir. As its blue water kept appearing to my right, and I thought it would never stop, I gazed through the scrim of trees on my side at the more solid mass of trees on the opposite bank. Eventually I turned right on what the book calls State 106 but what is now Center Road, into Easton Center. Above is the 1817 Congregational Church in Easton, "set high above the road in the traditional New England manner." (The traditional New England manner, I have concluded, involves making it as hard for yourself as possible in the winter.) Very close by, on Route 136, is the perfect little white Adams School House, which looks quite church-like itself, and is not on the tour. 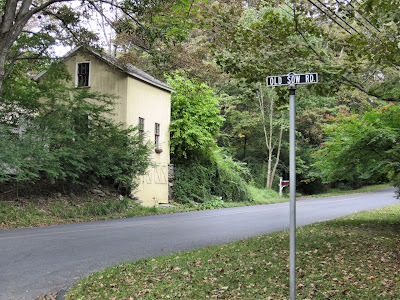 I passed this road on the way to Easton Center and had to stop. Personally I think road signs like this evoke the lives of traditional New England people, even more than the churches. I just want to know if it was a large pig or a disdained woman who lived on this street. The building is typical of a lot of houses and barns I saw on this drive, tall and straight, perched high above the hilly road and set very close to its edge, as if they might tip over onto passing cars. 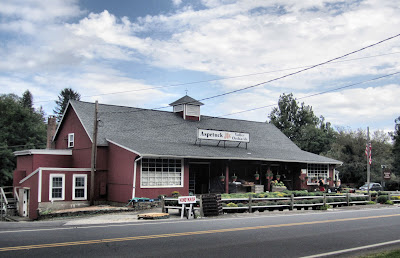 Easton has no cell service at all. I felt a strange sense of being lost to the world as my 3G turned to E turned to "searching" and then nothing, a flat line. It is a particular type of person who would choose to live here, one who likes massive houses and fantastic old barns and farm stands, and who wants to be technically close to major population centers but to feel as if they might be cut off, unreachable, for months. I have felt less out there (and less abandoned by AT&T) while driving through cornfields and prairies that were literally hundreds of miles from anything that could pass as a town.

I turned right off of 58 again, onto my best guess at "a side road," from whence the book said I could find "a little wooden bridge spanning an impressive 50-foot cascade." I did not find this, only remoteness and wind-slanted woods. Instead I went on into Redding, where I passed several small and humble churches, one of which was presumably the building with "a damaged weathercock from which the legs were shot by one of Tryon's men as his force marched through this district en route to Danbury." In Redding, also distant-seeming and wooded, my cell service immediately returned. 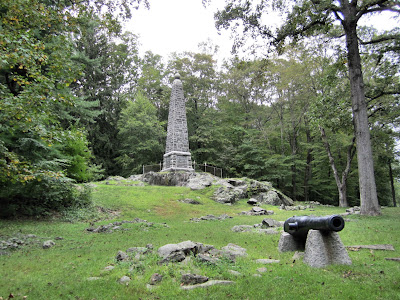 After a short distance that felt like an interminable distance, I reached Putnam Memorial State Park, Connecticut's oldest State Park (this monument was built in 1888) and the site of the 1779 winter camp of General Israel Putnam. "Connecticut's 'Valley Forge'" the book says, where Putnam's troops "endured the rigors of the bitter winter." With that comparison in mind, I thought about how isolated this place is compared to Valley Forge, which is just a few maddeningly confusing major roads away from a massive shopping mall and a long strip of chain hotels. 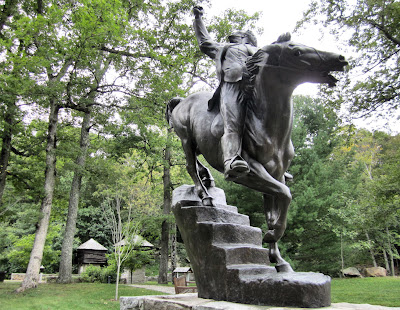 At some point I'll return to this park to see the museum and the legendary cave and the relics and reproductions. This time I was dressed only for walking the very short distance to this statue of Putnam, escaping pursuing British troops by daringly steering his horse down a set of stone steps. This happened in Horseneck in Greenwich, which was not yet Greenwich. Giving up their chase, the British riders shot at Putnam as he sped away, piercing a hole through his hat. He is said to have turned back to taunt them.
There are a few miles more to Tour 1B, which officially ends at Route 202, though it seems there's nothing noteworthy in those miles, only more of the "thickly wooded district" I'd just come through. So I didn't go all the way. Nor did I find the "Primitive Ruins, locally known as 'crows nests'" which once lived "in the underbrush at 11.2m." But I found quiet, and the high waters of reservoirs and ponds rising up almost level with the road, and one of those strange little journeys that take so much longer to get there than they do to get back.