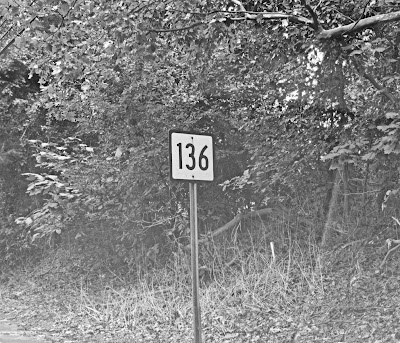 I wrote some time ago about how fond I am of the Federal Writers' Project guidebook to Connecticut. After thinking I should do it for months, I finally tried out one of the shortest of the book's tours. Tour 1A (sort of a part of Tour 1, which runs along the coast from the New York border to the Rhode Island border) goes just from Darien to Fairfield, mostly on Route 136. I knew 136, or thought I did; it's one of those roads you take when the highway Northbound is so gridlocked that you get off wherever possible. So I thought this would be pretty easy. 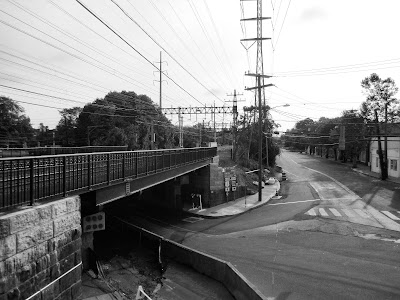 And the first part was, starting "at the railway underpass in Darien." As I walked along the platform to take this picture, a preppy guy called out to me from across the tracks, "I can't believe I have to walk all the way over here to buy a friggin' ticket!" Darien-type people usually regard me as they would an empty space, so that was odd. 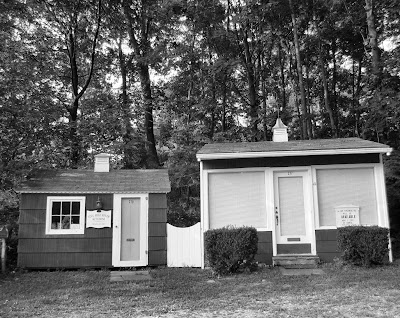 I continued into Rowayton, "an old landing place on the Five-Mile River which basks sleepily in daydreams of the past..." Why, yes! 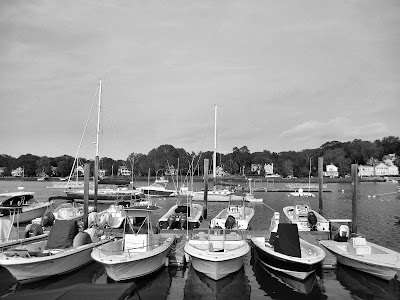 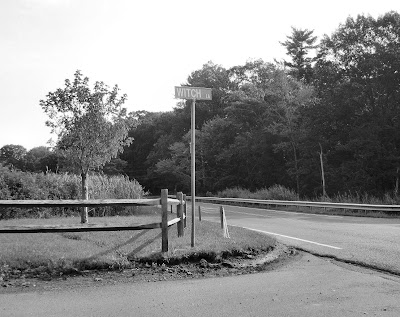 No word in the book about what happened up there, though I would love to know. 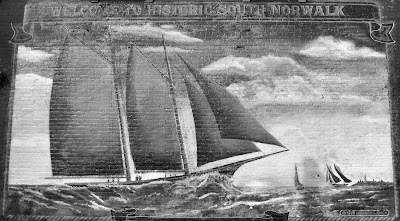 Into South Norwalk, "the manufacturing center of Norwalk." 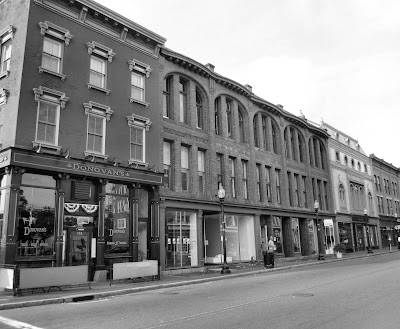 Washington Street, not mentioned in the tour, was almost completely empty. I guess I'd never been there early in the morning. One solitary waiting limo driver, and the girl with long blond hair and attitude you could see from blocks away who eventually got into the limo, were the only sign of the effort that's usually displayed around here. 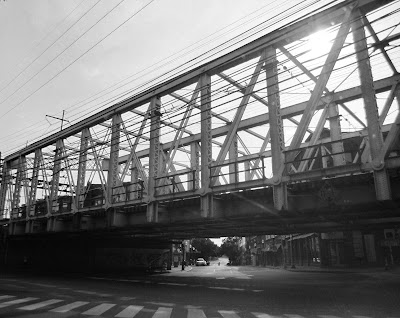 The tour doesn't have you go this way, but the sight of an empty SoNo was so enticing that I took a small detour. 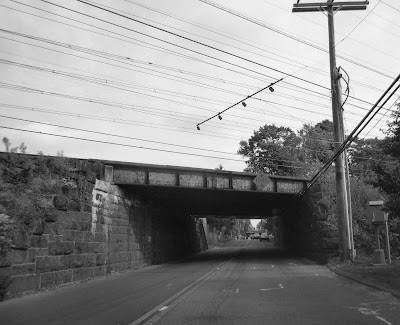 "This route follows the Saugatuck River for two blocks past a settlement of fishermen and lobstermen to the old shipping port of Saugatuck..." It sounds so much more romantic than the Saugatuck railroad station in Westport.

Shortly after this is where it got bizarre, because the State 136 of the book goes nowhere near the 136 of today. I tried. I spent over half an hour trying to drive a distance of about 10 minutes, but the road simply didn't go where they said it would. It was supposed to continue along the shore, but it doesn't. Either a different road was designated 136 in the '30s, or the people who wrote this were drunk, or I have lost my mind (or all three), because the proposed route is impossible. 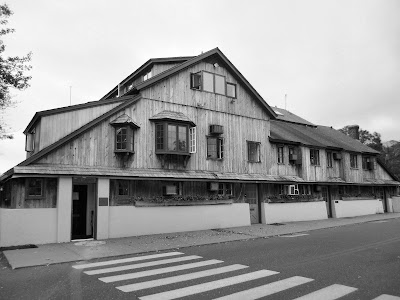 However, the last part of the tour, where you turn off of the phantom 136, begins at West Way Road. Though nothing resembling 136 goes there, I knew how to get myself to West Way Road. Everything gets quieter there, and cars defer to bikes traveling slooooowly down the center of the street, and then you enter the shockingly pretty part of Southport. "After the burning of Fairfield, Southport became the business center of the town. Most of the influential citizens lived here and erected the many dignified substantial homes bordering its hilly, elm-shaded streets." One tends to forget (one = me) how much of Western Connecticut was burned during the revolution. But of course it was, they just seem to have recovered from it better than my town.

Above is the Tide Mill Building, now offices. At the time the tour was written it was the Tide Mill Tavern. Several earlier grist mills had stood on this spot, and it was still being used as a mill in 1915. In the 30s, as now, "some of the mill structure has been retained, although extensively remodeled." 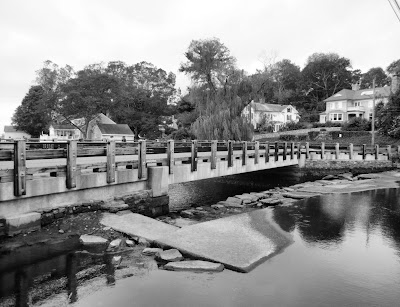 "Beyond the Tavern the road leads across a bridge over Mill River..." From here the tour takes you back to the Post Road, where Tour 1 picks up again. I didn't continue. But I glanced in the book at Tour 1B, and it promises "Primitive Ruins" and a monument to General Israel Putnam. I have no idea if those things are still around, but I might have to find out. Tour 1B is only 18.1 miles...
Posted by Johnna Kaplan at 7:50 AM