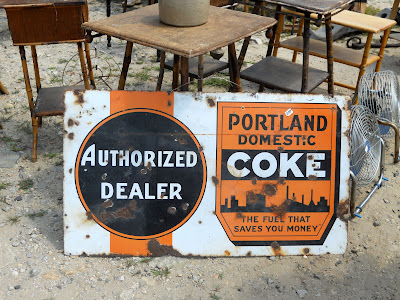 When I was 17 and living on my own in New York City for the first time, everything seemed slightly more fantastical than it really was. For example: flea markets. On certain days, drab places you'd normally pass by without a glance would suddenly, magically, become bustling marketplaces full of worldly-looking vendors selling everything imaginable, and much that was unimaginable. There was an empty lot somewhere in the Village that I remember, and a multi-storey parking garage in Chelsea. They were a little like street fairs, except instead of jewelry and scarves and fresh-squeezed juice, they sold odds and ends and bits and bobs and knick-knacks, things that didn't look used so much as well-traveled, or experienced. I never bought anything, but I loved the idea that if I ever wanted to, whatever I wanted would certainly be there.

Now, I'm older, and I know there's nothing mysterious about a flea market. But I was curious to see Eastern Connecticut's biggest flea market, a drive-in movie theatre in Mansfield that's converted every Sunday into a sprawling outdoor shopping experience.

I paid $2 and parked in a vast field, thinking why didn't I download that "where's my car" app? Then I wandered into the (sort of organized) chaos. It was a little like the city bazaars I remembered, but crossed with a farmer's market, a local fair, and a massive tag sale. It was overwhelming (in a good way) and it had a sort of carnival atmosphere. People clearly came here from far and wide, very un-Tolland-County-seeming people. There was a throw-back tacky strangeness to it all, which was enhanced by the three large movie screens looming above everything. And of course there was all the stuff.

A lot of it was Justin Bieber posters and used copies of Dan Brown novels and assorted plastic junk. But some of it had potential. If you collected, well, anything, you could probably find things here to add to your collection. I overheard one girl saying she'd found a Kate Spade bag. If I were decorating a house, I'd have wanted to come back with a truck and load it up with wooden furniture. But I'm attempting to move out of one 1-bedroom apartment into another, and the last thing I need is more stuff. So I didn't buy an enormous silver washtub, or a surprisingly heavy ancient-looking flat-iron. I didn't buy a large Dead End sign with a bullet hole in it, though I wanted to. I didn't buy a vintage wooden sled, though vintage wooden sleds were clearly having a moment.

I didn't buy anything, in fact, except a few hours of entertainment, and a glimpse into what felt like a funky self-sufficient little world, completely detached from its pastoral surroundings. So, for $2...totally worth it.
Posted by Johnna Kaplan at 11:22 AM