The Size Of Ohio

Ohio is hardly the biggest of states - it's 34th - but it really feels like it. Willa Cather wrote that Nebraska was "still, all day long, Nebraska." I can't comment on Nebraska; I've only been to Omaha, and that didn't last very long at all. But I have driven across bigger states - Montana, for example, and the Dakotas - and they didn't feel anywhere near as big as Ohio. (This post is actually about Connecticut, by the way, it just doesn't seem like it yet. But wait.)

Anyway, usually I try to get through Ohio as quickly, or at least as directly, as possible. But recently I had to get from point a to point b, and in between point a and point b was, as it so often is, Ohio. And I thought, hey. Why don't I just accept how long it takes to get across this thing and take the Ohio River Scenic Byway all the way? I love scenic byways, and there's a small part of this one, in eastern Indiana, that's one of my favorite little pieces of America ever. It couldn't take that long, right?

So I started to drive.

And there was a lot of this: 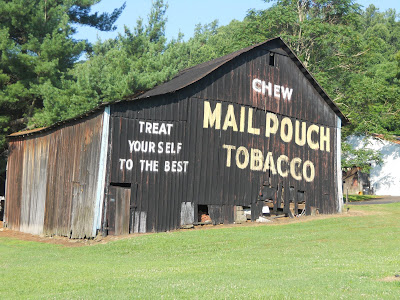 And a bunch of this: 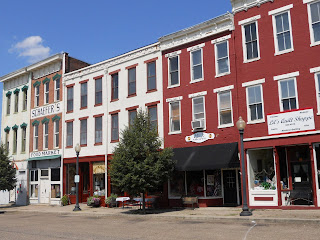 And incalculable bucket-loads of this: 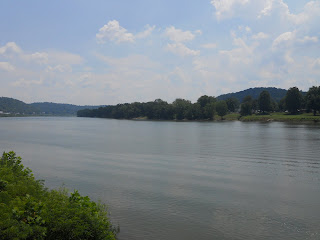 And it was beautiful and charming and peaceful and oh my god get me out of these cornfields NOW. So I gave up and got back on the highway. (Which was not a real highway, but one of those state roads that function like highways except that instead of proper exits they have randomly placed little intersections at 90-degree angles. I think these might exist only in Ohio. I also think that might explain why seemingly all Ohioans drive fast normally but take turns at, like, 3 mph.)

So I drove the Ohio River Scenic Byway from Bridgeport to Portsmouth*, and I don't know how long it took exactly, but let's say it took a long long time. And it occurred to me at some point that I must have driven the equivalent of back and forth from Mystic to Litchfield at least twice. And I know how much I'd complain if I had to drive back and forth from Mystic to Litchfield twice.

And in all the time I was driving on that Scenic Byway, before I gave up around Portsmouth and got on the little non-highway to Cincinnati, the landscape hadn't changed much. The topography changed, but the general atmosphere of pastoral emptiness interrupted periodically by towns of a few hundred people continued. All day.

If you drove around Connecticut for that long, you'd encounter farmland, suburbs, cities of varying sizes, small towns, forests, coastlines, rivers, lakes, and hills. You'd travel on congested major highways, winding back roads, and everything in between. Connecticut is the 48th biggest state. Thanks to Ohio, part of me is really starting to appreciate that.**


*Yeah, they have those too.

**Not to say you shouldn't check out the Ohio River Scenic Byway. It truly is an impressive river and a part of the country that's often overlooked, but worth seeing. Just, maybe, don't do it all at once. And bring a friend. That way it will be funny and not annoying when the sign leads you the wrong way for miles down that little road through that cornfield.
Posted by Johnna Kaplan at 9:20 AM

Email ThisBlogThis!Share to TwitterShare to FacebookShare to Pinterest
Labels: Driving, Not Connecticut