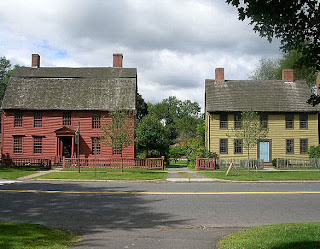 I had a dream I was flying from one European city to another, not for any particular reason, it was just what I did. Although all of the dream took place in airports, I was happy. In real life I haven't flown anywhere, let alone to Europe, in years. But I’ve driven around Connecticut a lot. Maybe my subconscious just wanted a change of location.

After a while CT begins to look really familiar. I went to Wethersfield, mostly because I happened to be nearby and I knew that going to Wethersfield is a thing people do. Wethersfield gets written about in magazines. It has CT’s largest Historic District. And it is appropriately Colonial and adorable, and I was appropriately charmed. The people seemed proud of their town, in the sense of happy to live there, not snotty and superior because they live there. Also, they seemed nice. (Midwestern nice!) But although Wethersfield was as lovely as advertised, and better for being unpretentious and laid-back and having a quiet little cove with ducks, I was sort of, like, eh. OK.

Wethersfield had everything that I didn’t know CT had when I lived here as a child, everything I vaguely wanted to get away from when I moved to NY, everything I discovered I loved about living in MO, and everything that made me want to move back to (non-Fairfield-County) CT and experience it all anew/again, not as an outcast but as an outsider. But now I was, maybe not actively tired of it all, but jaded. I was in center chimney Federal house overload, native produce at roadside farm stand fatigue, bobbing little boats tied to a private dock burnout, George Washington slept here meltdown. And I didn’t have the money to leave, even for a little while.

Anyway, I looked through my pictures of Wethersfield and discovered that an inordinate amount of them were of doors. (Crooked doors; for some reason all my pictures of houses come out like I was drunk when I took them.) Was I looking for a way into this cute and too familiar - yet so unattainable - life? Or a way out? A great many of the doors were Dutch doors, so maybe I wanted half of each, or both at once. Or maybe I just liked the idea that something can be understated and traditional and still bold enough to accent muted red with shiny black, creative enough to mix mustard with pale blue.
Posted by Johnna Kaplan at 1:30 PM