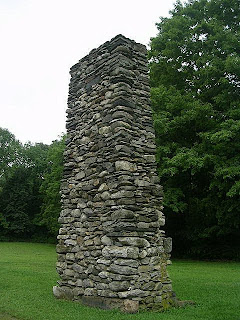 It stands all by itself on a patch of grass beside Route 7 in Kent. The first time I saw it, I thought it looked bizarre and vaguely ancient, like a ruin from a lost civilization. But I figured something that intriguing would at least have an explanatory plaque. So I did a little research, which turned up several mentions of the Kent Iron Furnace, a stone structure on Route 7. Oh well, that must be it, I thought. Not a mystery, simply a relic of the iron-ore industry that flourished in this area in the 1800s.(I said so in this post.)

I drove past it again recently and decided to take a picture. And then I decided to double check, just to make sure I had gotten my facts right earlier. And I found...I hadn't. The Kent Iron Furnace is something else entirely. This thing is...well, the most specific mention of this thing that I've found so far is in a newsletter from the Kent Historical Society, in an article about something completely unrelated. It says: "...on the other side of the road, near the chimney that stands alone there (itself a source of mystery and misinformation)." Hmmm. So maybe I was right the first time.
Posted by Johnna Kaplan at 11:42 AM