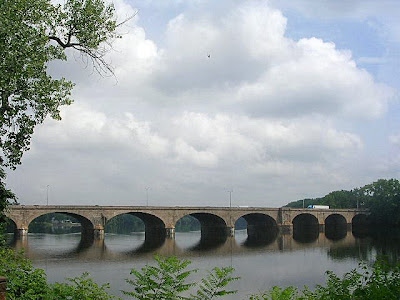 I've been in Hartford County a lot recently, Windsor and South Windsor and Windsor Locks and East Windsor Hills. Something that keeps popping into my head (aside from the fact that creative place names were clearly not a 17th century British priority) is that Connecticut is sort of like the United States writ small. The Eastern part is historical and traditional and nautical. The West has the fashionably rural weekend houses, the eco-trendy neighborhoods and the high-end shopping streets. And in the middle...well, no one really knows. A few large-ish cities, where people sometimes unfortunately have to go for business purposes; some farmland, perhaps; some featureless suburban towns that blend into one another; and a number of rivers that you couldn't quite identify on a blank map. But nothing worth seeing.

And then you go there, to the Heartland of Connecticut, and you discover you had it all wrong. OK, it's not a perfect analogy. But I was in Hartford the other day, wandering along the Riverwalk, and the sense of safety even in isolation, the nearby urban center hinted at by the partially visible highway, and the meticulous upkeep of the green space and pathways, reminded me of nothing so much as Omaha. (It surprised me, as a New Yorker, that people in Omaha - and Kansas City and Pierre - didn't seem to mind a bit that they lived in Omaha - or Kansas City or Pierre. It's the same with people in Hartford.)

Those punchline cities, the places with inordinately high crime rates and memories of former importance, have cultural institutions and unexpected architecture and the quiet dignity that comes from not having to try to keep up. In the small towns, there has been no rush to tear down every house to build a bigger, uglier one. They're slower, and quieter; they almost make you forget your dislike of small towns. They might as well be in Indiana.

Here, as in the actual Midwest, it takes longer to get from place to place than you'd think it would. This is partly because people occasionally drive across the road on tractors. But it's mostly because there's just more stuff here than you thought, and that stuff - bridges, restored old schoolhouses, tobacco drying sheds, fields and rivers, wide highways and little back roads - needs a lot of space. And then you sort of understand the early settlers, because filling all that space, and appreciating its beauty, doesn't leave you much time to come up with original names for your towns.
Posted by Johnna Kaplan at 9:45 AM