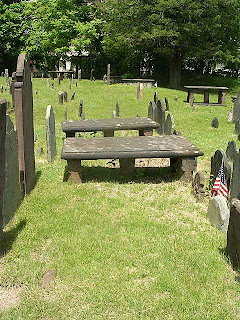 First there is the name on the sign. Ye Townes Antientest Buriall Place. It's not cutesy-historical for show, the way some Connecticut towns call their shops "shoppes." It's surprisingly otherworldly, and it reminds you that the New Londoners who built and used this cemetery were, in many ways, strangers.

Then there are the graves: table tombs, great slabs of stone that rest on five mismatched column legs. Soul effigies, carved to look happy or sad, like 18th century emoticons with wings.

Yet the people who practiced them are familiar to me too, because of a coincidence of timing. I have just finished the autobiography of John Fitch (he built America's first steamboat, though that wasn't even the half of it.) Fitch was New England down to his "broke at the Elboes" homespun, though he left Connecticut at the age of 25 to wander the country (and beyond) and never returned. His book provides a glimpse into the lives of those people who you know were not as puritanical and colorless as they sometimes seem, but who surprise you nevertheless with their complex, messy lives. Fitch's friends and enemies sneak into other people's beds and have screaming fights about it while neighbors listen through the walls. They slight each other in petty ways; they ruin lives with casual rejections; they dig graves in frozen ground to bury their dead children.

I thought of them in the Antientest Buriall Place, not only because of the dead children but because their stories leap off the page the same way those of the people interred here spring from their grave-markers. Lying beneath broken slabs of stone, under a wide cascading tree, overlooking a river they would recognize and a highway bridge they would not understand, they seem more alive to me than most of the living people I encounter. I wonder if the fact that I feel more at home in Connecticut’s past than its present makes me more of a New Englander or less.
Posted by Johnna Kaplan at 2:49 PM