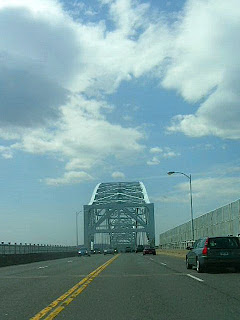 Driving East to West on Route 66 (no, not that Route 66) which bisects sleepy townlets. Similar to other semi-towns across the state, each is allotted a few white buildings (a church, a post office or town hall) and a cute extra (a pastel-painted store, a vintage truck in a funky color, a diminutive museum or library.) They are adorable, and they are all alike. They make you think you know what’s coming.

Then suddenly, a bridge – unexpectedly sky blue and undulating, something that should be spanning the Mississippi or the Ohio, not the Connecticut River. And then, more suddenly, a wide and bustling main street, block after block of low 19th century buildings. Shops and restaurants and people and cars and…diagonal parking! (Diagonal parking on a main street says, Come here! Parallel parking says, Go away!) This is Middletown, which I always thought must be a wasteland. Residual Fairfield County scorn, I suppose: scorn for any place in the “middle” of anything, and for reputed cow-tipping (which, I am told, cannot be done.) It is also, unexpectedly, one of the friendliest towns I’ve been to anywhere.

On another day, lost on back roads, following orange detour signs, racing against time to reach New Haven before rush hour congeals the highways. A jumble of variously shaped buildings, arranged at unusual angles, catches my eye. It feels like a Colonial village that has been artfully jumbled to create something entirely new. Suddenly my time constraint is forgotten. I turn, compelled by surprise and curiosity, and see the town of Chester, or part of it, as much of it as I can take in while exclaiming “How cute is this?!” before responsibility forces me to move on.

You can’t set out to find these places; they appear when they choose. They are pop-up-book towns, like driving along a page that unexpectedly unfolds before you, and you find that what seemed flat in fact contains myriad intricate folds, constructed with the utmost care. You imagine that when you have passed, it will all fold up again and wait for the next unsuspecting driver, allowing them to think they have discovered something that’s been there all along.
Posted by Johnna Kaplan at 11:52 AM