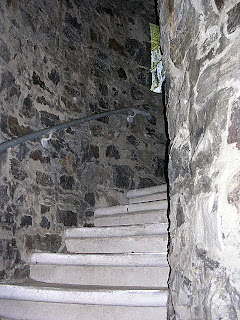 The northeast is the "Quiet Corner"; the only corner of Connecticut, as far as I know, that has a name. The southeast corner, where I live, is known for its history and casinos and longstanding ties to the sea, but in travel articles about the state, it’s often ignored. (The Neglected Corner.) The southwest corner, where I grew up, is known mainly for being near New York. (The Hedge Fund Corner, perhaps.) Recently I found myself staring at a map of the northwestern tip of the rectangle and wondering just what, exactly, was up there. I asked my Mom, who still lives in the southwest, but she had no idea either. So we set out in search of the mysteries of what I began to call "the Other Corner."


We drove north from Westport through wooded hills and big box store strip malls and road construction. A tractor supply store appeared and soon enough the suburban sameness was replaced with tiny farms and the Housatonic River began to snake slowly along beside the road. We passed a yellow Cow Crossing sign, shortly followed, comfortingly, by cows.

None of this was new. I’d been to Kent, where the sign announces that you are welcome but you kind of sense that you’re really not, and to preppy Litchfield, where people’s heads swivel around like oscillating fans when an outsider walks into a café. This wasn’t the Corner yet.

A little further north, things began to get odd, in the best possible way. A large stone chimney rose from the ground, surrounded by a circle of grass. It was only a remnant of this region’s industrial past, what’s left of the 1800’s Kent Iron Furnace, but it looked like some sort of mystical ancient monument.

We drove into West Cornwall, which has an old red-painted covered bridge. (You’d think this would be in nearby Cornwall Bridge, but you’d be wrong.) The bridge was dark inside and just wide enough for one vehicle at a time. The town was so perfect and diminutive that we cooed over it as if it was a toy town on a store shelf.

Multiple Cornwalls and numerous Canaans, all pocket-sized and adorable, overlapped in ways incomprehensible to non-locals. In Falls Village, technically another Canaan (don’t ask), the houses were elegant in a way that contemporary buildings never are, as if the town had an ordinance against extras and flourishes. We tried to explore but the gently inclining roads formed triangles which led us back to where we started. It was like they were purposely keeping us from something, vigilantly protecting what was hidden around the next turn.

The Housatonic reappeared on the other side of the road, no longer placid but flowing swiftly. The views became more expansive and the hills less thickly wooded. Now we were really in the corner of the map.

We turned east where Connecticut borders New York and Massachusetts and drove until we arrived at Haystack Mountain State Park. We drove up a one-way road, and up and up, wondering what would happen if someone came down. But no one did. When the road ended we walked, first along a soft path of dead leaves under a canopy of trees, then up an increasingly steep hill, then up stone steps two feet high. After half an hour, we were over 1,700 feet above sea level, staring up at a sturdy stone tower. A staircase curved around the inside of the cylinder; the upper level had a peaked wooden roof and a 360 degree panorama of the Berkshires. We felt thoroughly alone, but for some reason we whispered.

We drove on, intending to complete the Corner by continuing west, and then suddenly we were lost. Deeply, profoundly lost, the kind of lost you can only get in your home state on a clear day with a map on your lap. If it wasn’t all so pretty, so serene and leafy and empty, I would almost have suspected a plot. If I lived in a place like this, in one of the grand yet understated white houses that occasionally interrupted the defensive line of trees beside the road, would I want people to be able to find it?

We had been lost for so long that I couldn’t believe we hadn’t crossed a state line, when suddenly we were found. Or rather, we found something: a whole city (or in this case, a city wrapped in a town) sprang up seemingly out of the earth. Winsted, with its broad main street (widened after the devastating Great Flood of 1955 destroyed the original) looked like an Ohio River town taken apart and transported to New England to be reassembled. We passed a movie theatre, a post office, coffee shops, neat lamp-posts with banners in a row. I stared as if I’d never seen such things in my life.

We abandoned the Corner plan and zigzagged up to Riverton, which appeared to be waiting for a 4th of July parade. Flags waved proudly on both sides of the main street and the smart buildings practically begged to be draped in bunting. Even a disused factory looked distinguished. We entered the adorable white-painted General Store (really a convenience store-slash-small deli), where we looked similar enough to the other people, but heads swiveled and we could not have felt more out of place. The attitude, like the architecture, was vintage Western Connecticut: a subtle but unmistakable dismissal. We accepted their judgment, and started back.

So I’d answered some of my questions about the Other Corner, but now I had more. I wanted to learn what roads I’d been on when I was lost. I wanted to know what gave the stone structures and silent woods and deceptive roads their mysterious feeling. I wanted to figure out what was so good up there that they didn’t want me to find it.
Posted by Johnna Kaplan at 1:47 PM