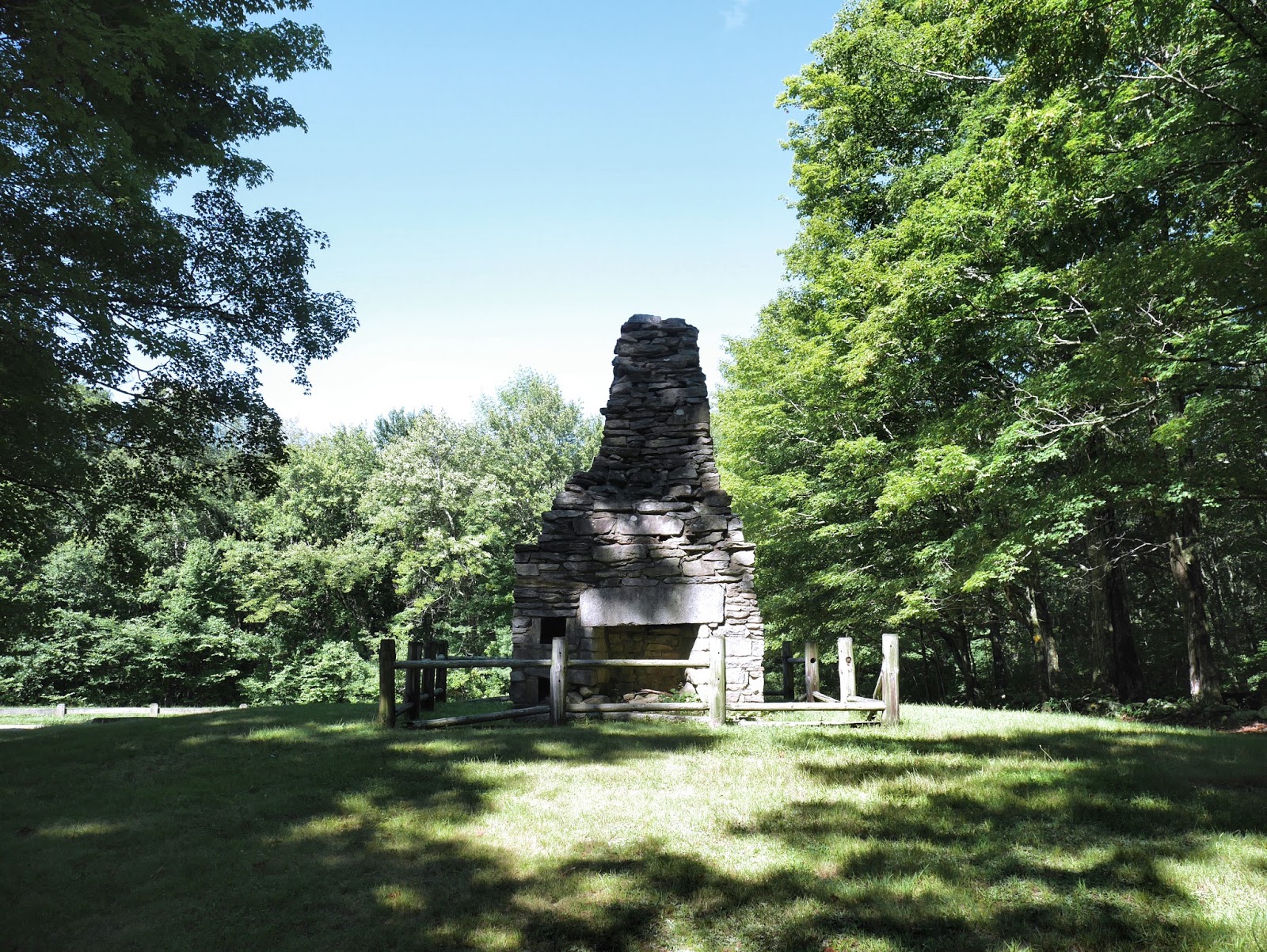 Civil War monuments are common in Connecticut. Often they are simple obelisks on town greens or lone soldiers standing on pedestals. Sometimes they are grand, like the Soldiers' and Sailors' Memorial Arch in Hartford. But for true Civil War sites, you have to go further south.

Or so you'd think. In fact, there are places in Connecticut that connect more directly to events of the Civil War. One such site is the empty and eerie John Brown Birthplace in Torrington.

Another is this rough-hewn chimney in Eastford, which is all that remains of the birthplace of General Nathaniel Lyon, the first Union general to die in the Civil War. Lyon was born in Ashford in 1818 (the chimney is now in the town of Eastford, which broke off from Ashford in 1847) and killed in the Battle of Wilson's Creek in Missouri in 1861.

Lyon was, to put it mildly, an unusual and complicated guy.* He is not, perhaps, the very model of the ideal Union general Connecticut would choose to claim as its own. Born into a family populated with military heroes and notorious nonconformists, he had a (literally) violent temper and frequently questionable judgement. Many of his military actions were (again, to put it mildly) controversial, and he was quick to express his sometimes uninformed opinions. Yet, he was a vehement opponent of slavery. He consumed large quantities of candy and was known for eating mustard "slather[ed] ... on thick slices of bread, even in the midst of battle."** He died while leading a counter-charge at 9:30 in the morning (having already been wounded in the leg and head and having one horse shot from underneath him) from a bullet to the heart. He once told an aide who apologized for finding him a sleeping place on uncomfortable stony ground, "I'm quite alright. Back in Connecticut, where I come from, I was born and bred among rocks."

The fireplace and chimney (notice the small square oven in the side) stands at the center of a grassy circle, ringed by a dirt road, near ancient-looking stone walls and dark woods. On the map, this is called Nathaniel Lyon Memorial State Park. It is a small part of the Natchaug State Forest, which spreads across parts of Eastford, Chaplin, Hampton, and beyond.

Nearby, on General Lyon Road, there is a small cemetery. Here, in his family's plot, Nathaniel Lyon is buried. There is a marble monument to him, marked with the names of battles he fought in and topped with a dove. Somehow, it seems not as fitting a remembrance as the imposing chimney that has survived for centuries and looks as if it will stand through many more.

*For a biography, try Damned Yankee: The Life of General Nathaniel Lyon, by Christopher Phillips.
**OK, this comes from Wikipedia, so who knows if it's true. But I hope so much that it's true.
Posted by Johnna Kaplan at 8:15 AM