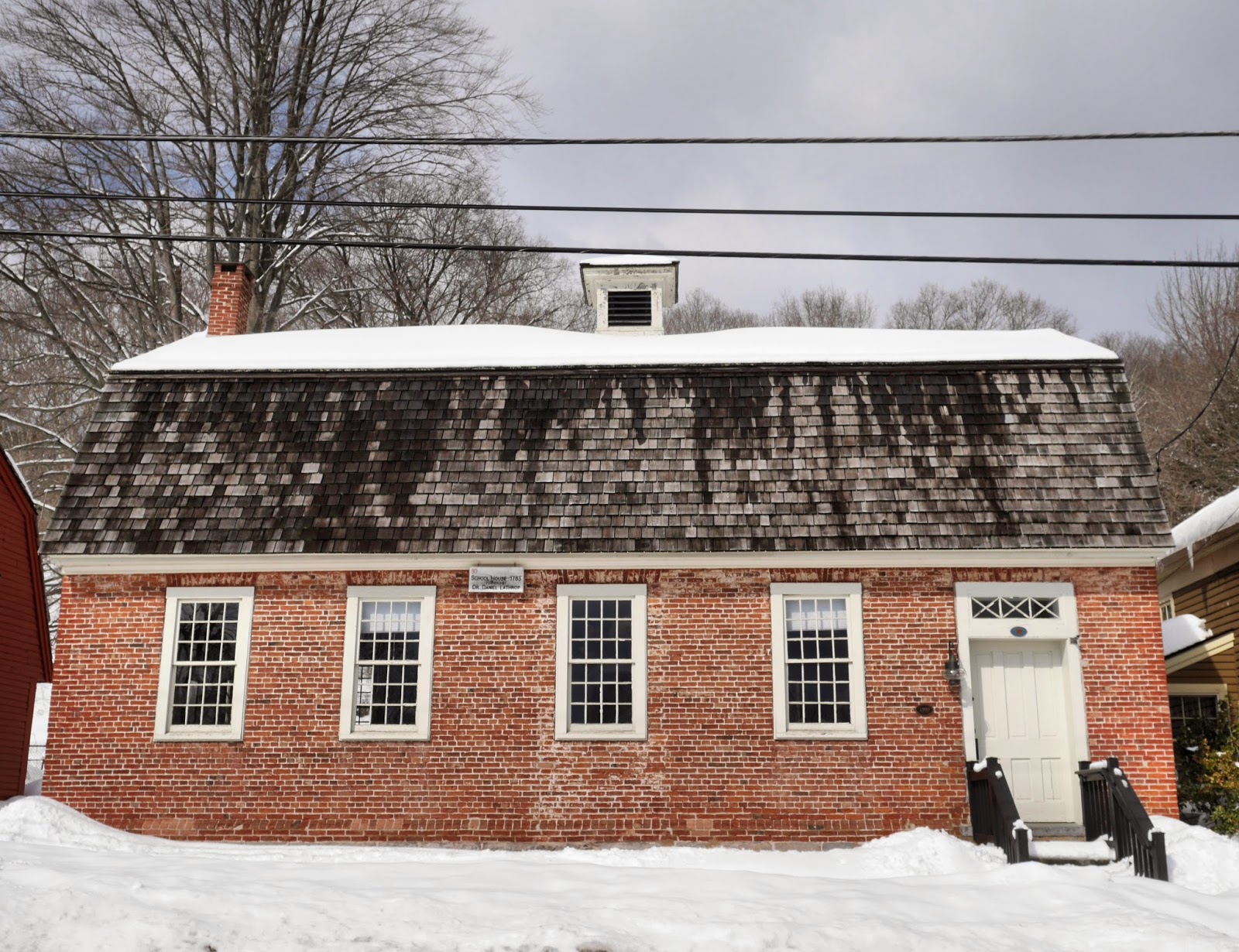 I grew up practically down the street from an old one-room schoolhouse, but I didn't really care about them - or begin to notice them everywhere I went  - until I found this one while researching a travel story. Since then I've found schoolhouses all over Connecticut: in towns, in cities, and on rural roads. I've also become very fond of them - strange, perhaps, since I hated almost every minute of school from kindergarten to college.

Now, I think of these historic one-room (and sometimes technically larger) schools as a classic bit of Connecticut scenery, worth seeking out or at least stopping to appreciate when they turn up unexpectedly along your route.

Some of my favorites.

-State Hero Nathan Hale taught at two schoolhouses. In urban New London, the little red school named for him stands at the center of the city's downtown on the Parade across from the train, bus and ferry terminals. Thirty miles away, its counterpart in rural East Haddam stands alone on a grassy hill above a church. Both are maintained by the Sons of the American Revolution.

-In North Woodstock, the Red-White School is pull-over-and-stare adorable.

-Killingworth has one of Connecticut's largest collections of schoolhouses, but the mint green Union District Schoolhouse is a special one.

-And in Ledyard, where an impressive number of old schools have been preserved, the Geer Hill Schoolhouse is particularly sweet.

How to find schoolhouses.

Searching online for any town's name + "old schoolhouse" will frequently turn one up. (Except in some rare cases where you will instead find clubs playing old school house.)

Often, local historical societies own and care for schoolhouse buildings, so check their websites as well. Some simply keep the school building from falling down, but many offer programs for local children and sometimes for the public. Some schoolhouses have been put to creative use - one is now an art school in West Hartford, and another is a restaurant in Wilton. Many are private homes.

Sometimes, if the school is of particular interest to the town, it will be listed in the "history" or "visitors" section of that town's website.

If search engines and historical societies don't reveal any schoolhouses where you're heading, look for local history books at independent bookshops, museums, and in the "local" section at Barnes & Noble and other large bookstores. If you can't get to a store, try Google Books - just search for the town's name + school or schoolhouse.

Following a Schoolhouse Road will very occasionally yield a schoolhouse, but more often it won't; many have been torn down or moved over the years to more central locations for preservation.

In my opinion, though, schoolhouses are best when found by chance. Some good areas to do that are Ledyard and Killingworth, as mentioned above; country roads; older residential areas; and any part of town with a large concentration of historic houses and museums. A town where nothing of great import has happened since the 18th or 19th century is a good place to explore. And if you see a small white, red, or stone building, especially one with two doors, chances are it was once a school, even if it is no longer marked as such.

Schoolhouses were sometimes built in the center of a road. I've heard that this was a way of sparing good farmland, and/or that no one would dispute the ownership of such land. In any case, a small structure on the traffic island in the middle of an intersections is likely to have been a school.

Finally, if you're wondering about the school in the above photo, it's the Dr. Daniel Lathrop School on the green in the Norwichtown section of Norwich. In 1782, Lathrop left 500 pounds sterling to be used for a free grammar school. It was completed in 1783, and is one of Connecticut's oldest surviving brick schoolhouses - though there is another, very similar one nearby, known as the East District School, built just a few years later.

If you visit this school, a special bonus is the 1774 Joseph Carpenter Silversmith Shop next door. I've come across one or two blacksmith's shops in Connecticut before, but this is said to be the only remaining silversmith's shop in New England.

The other buildings facing the Norwichtown green, though much larger, are equally send-you-back-in-time lovely.

I created an Instagram account, @OldSchoolCT, just for historic Connecticut schoolhouses. There I'll collect schools I've featured on the Size of Connecticut, schools I've posted pictures of elsewhere, and new-to-me schools that I come across when out and about around the state.

Posted by Johnna Kaplan at 9:15 AM