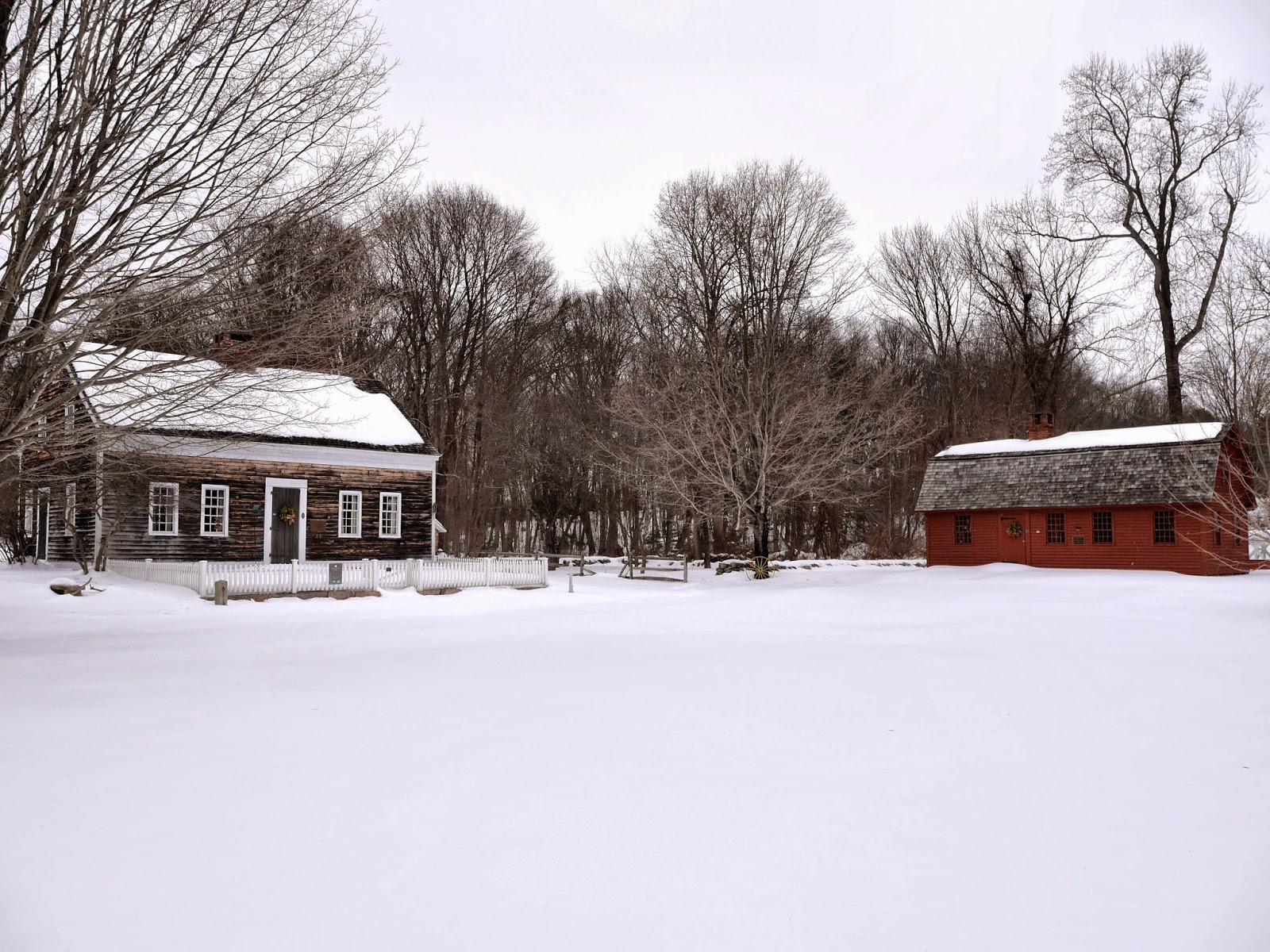 One thing Connecticut loves to do, when we're not jogging in shorts in sub-zero temperatures or arguing about zoning, is to gather up a bunch of historic buildings as if they were so many ceramic figurines and display them all together in a collection.

In Waterford, pictured above, three buildings stand on Jordan Green, a.k.a. Jordan Park, on Rope Ferry Road. The former Waterford Library arrived on the plot of land (yes, there is land somewhere under all that snow and ice) in 1961. It now houses the offices of the Waterford Historical Society. In 1972 the 1740 Jordan Schoolhouse (the red structure) arrived, followed by the 1838 Beebe-Phillips House in 1974. There's also a corn crib. (I do love corn cribs.)

Wilton just had to be better than everyone else and create two of these groupings of historic buildings. Lambert Corners on Danbury Road has nine super cute little structures, now mostly commercial buildings, and Cannon Crossing in the Cannondale section of town is a destination due to the Schoolhouse at Cannondale restaurant (yes, in an old schoolhouse) and shops like Penny Ha'Penny. The Wilton Historical Society leads walking tours.

Stratford's Boothe Memorial Park and Museum, which overlooks the Housatonic River, is the oddest and possibly the largest of these complexes. It has to be visited to be appreciated, but it includes an old Merritt Parkway tollbooth, a "technocratic cathedral," a railroad station, and chickens.

Norwalk's contribution to the oeuvre is the Mill Hill Complex or Mill Hill Historic Park on East Wall Street, which the Norwalk Historical Society calls a "preserved slice of 18th- and 19th-century Norwalk life." It features a wee law office and a cemetery, and special events are held on the grounds.

In Granby, the Salmon Brook Historical Society has corralled a tobacco barn, a mail hut, and a state line marker (among other things) onto their property on Salmon Brook Road. Flea markets and shows take place here, and its range of buildings make it one of my favorites.

And then, of course, there is the "ghost town" of Johnsonville in East Haddam. Johnsonville is different from the rest because 1) it's a failed tourist attraction and not a historical society or town park, and 2) you're not technically allowed to go there. But I count it because it highlights so nicely the absurdity of the drive to wrangle unrelated historic buildings into one spot.

You could argue that Mystic Seaport is the original, grand version of these comparably tiny attractions; the "Museum of America and the Sea" began importing historic buildings from across New England in the 1940s.

I'm not aware of any other such museum complexes (or, as I prefer to call them, little building collections), but I would not be surprised if at least a few more were hiding in plain sight in other Connecticut cities and towns.
Posted by Johnna Kaplan at 7:50 AM