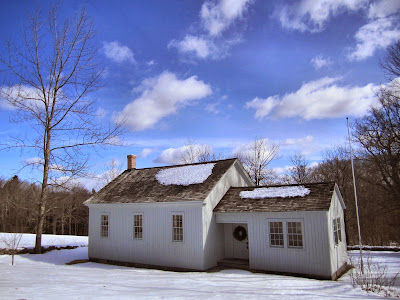 There are Connecticut schoolhouses made of rock, but the Rock School in Colebrook is not one of them. It was named not for the materials that went into it but for the sizable rock across the street. To quote the sign out front:


Originally located in front of its large namesake boulder across the road, it was moved to its present location in 1971.

Used from 1779 until 1911, it had several different names as school districts were added to the growing town.

To our knowledge, this is the only colonial schoolhouse in Connecticut never to have been modernized. The Rock School has never had electricity or running water. It is an active museum, owned and operated by the Colebrook Historical Society. It is open to the public, and is used as a learning tool by Colebrook school children.

Colebrook, by the way, was the 76th of Connecticut's 169 towns to be incorporated. This has nothing to do with the schoolhouse or anything, I just happened to discover as I was writing this post that the Connecticut Secretary of the State's website has a list of all the towns in order of establishment, from first (Windsor) to last (West Haven.)

And while I'm on unrelated trivia, there's a village in Thompson called Fabyan. Fabyan. I think everyone running for statewide office in Connecticut should have to be able to name the locations of places like Fabyan and Stepney and Tashua. And no looking them up.
Posted by Johnna Kaplan at 7:20 AM