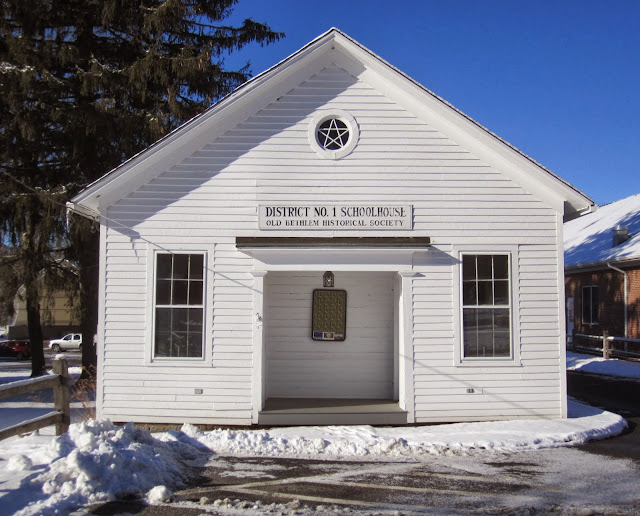 I hadn't avoided Bethlehem intentionally, I'd just never had a reason to be there. I mean, why would a Jew bother going to "Connecticut's Christmas Town?" The phrase made me think not only of the tradition of traveling to Bethlehem's Post Office for special Christmas stamps, but also of something vaguely gaudy. Like maybe the entire town was covered in blinking Christmas lights and inflatable reindeer.

But when I drove through Bethlehem for the first time - as it happened, this was in the weeks leading up to Christmas - I saw that I was wrong. The town was so subdued, so lacking in flashing lights of any kind, that I could easily have missed the fact that I was driving through it. There were just a few commercial buildings, some historic properties, a restaurant or two, a modest triangular green, and, of course, this: the District Number 1 Schoolhouse, built in 1850. It was once one of eight schoolhouses in this little town.

By the way, I can't see the word "Bethlehem" without recalling that in Hebrew it means "House of Bread." In case anyone was thinking of opening a bakery around here...
Posted by Johnna Kaplan at 8:45 AM