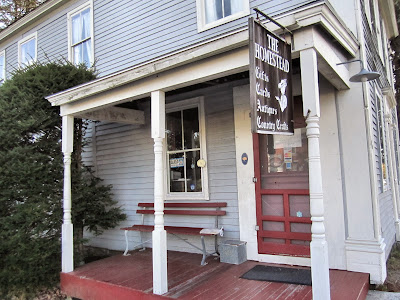 I don't know what people outside of New England imagine when they think of a small New England town. But I think it might be Tolland on a Saturday morning. A field of miniature American flags planted in the grass in front of a white church. A long town green on which people have parked pickup trucks and begun unloading tents for a farmers market in the early chill. A little arts center building with a sign outside explaining when to drop off your pumpkins. Numbered state routes that criss-cross confusingly through the center of town and then continue into the quiet morning until they reach the next town, where they will probably criss-cross again.

Imaginary New England probably also contains something like this: The Homestead, a country/antiquey kind of store located in a 19th century General Store building. It was one of the first things I noticed the first time I passed through Tolland a few years ago. It's currently for sale, which makes me a little sad even though it was never a part of my life. It's just that the "For Sale" sign represents the potential for another bit of Connecticut history getting lost.

Locally, this place is known as the Red and White, after a store that used to occupy the space. Which is sort of funny because where I grew up, Red and White was a formal dance. It was one of two girl-ask-boy dances, the other being Counties, short for County Assemblies. I just looked that up - in my day we called it "Counties" and did not question why. We did question why it had "county" in its name but only involved students from Westport, Weston, Wilton, and Fairfield. Wasn't Bridgeport in our county too? That, unfortunately, is also probably what people think of when envisioning small New England towns...
Posted by Johnna Kaplan at 8:30 AM