Beyond The Connecticut Barns Trail 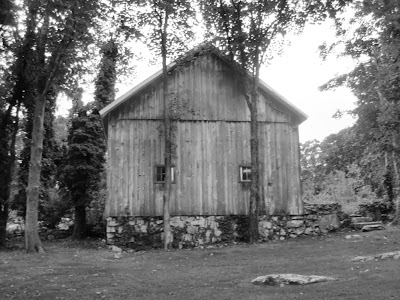 I used to write a column that required me to get lost in Waterford about once a week. While I was driving around, bewildered, swerving to avoid rogue chickens, I would sometimes notice a cool barn or corn crib half-hidden behind a house on one of Waterford's evocatively named roads. (Scotch Cap, Rope Ferry, Fog Plain, I could go on...)

When I discovered connecticutbarns.org I realized that I had only seen the tip of Waterford's barn iceberg. And that someone who was not me was also stalking the historic structures. Except unlike me, they had a method.

I ended up writing a few columns about Waterford's barns. On the back roads, seemingly laid out in a time predating logic, it was sometimes hard for me to find a specific barn or even an address. Sometimes I'd spot a great barn but stopping to look at it would require either risking my life on the road or blatant trespassing. (I'm more of a fan of subtle trespassing.) So I saw how much work had gone into mapping the barns and filling in their history and details for Historic Barns of Connecticut, which is a project of the Connecticut Trust for Historic Preservation.

Now Historic Barns of Connecticut has spawned the Connecticut Barns Trail, and has an app, called "CT Barns," which maps notable barns in seven different sections of the state. I downloaded the app as soon as it came out, and played with it a little. It does not include the sort of obscure barns that I got used to finding around Waterford. (It doesn't include any barns in or near Waterford at all.) Instead, it focuses on barns with something extra: working farms, hayrides, farm stands, tours, etc. That makes sense. If you wanted to plan a barn-centric day trip, I think the app would be quite useful, whereas the original website would drive you batty. But there are great huge swaths of territory that appear on the app to be barn-less, and that makes me a little sad. Realistically, of course, they couldn't list them all; the map would be an unreadable mess, and most people don't want to see some half-crumbling old thing on Spithead Road anyway.

I'm sure that some day I'll use the CT Barns app myself, perhaps if I'm in an unfamiliar part of the state and looking for apples or a place to bring tourists. But I still think the best way to see barns (or  anything, really) is to find a blank space on the map, and get lost.