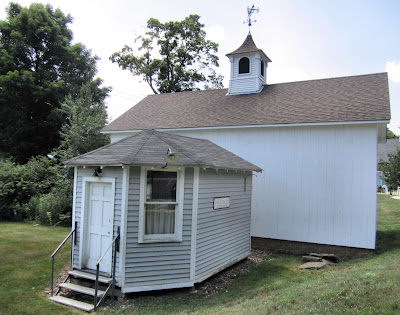 Once when I was 18 some random dude on the street in New York asked me where I'd been all his life. I have the same question for North Branford.

I thought the town would be just like Branford, which it is north of, or Durham, which it is south of. And it is a little like those places. But it has its own unique North Branford-y thing happening. And it's not one of those towns people talk about. I would never have thought it could be an untapped vein of strangeness, or a sudden source of happiness, like finding $20 in your other coat.


Oh, and in case you wondering what the heck that thing in the picture is, I will tell you. It's North Branford's first gas station. The website of the Totoket Historical Society, which maintains this and more of the town's historic buildings, says: "It dates back to the 1920s...It is a small, hexagonal shaped building with windows on an angle so that the attendant could look up and down the road for customers while seated inside."

And now that I've written that I will start seeing hexagonal pre-1920s gas stations in their original condition everywhere I go.

(By the way the lovely barn behind the gas station is a museum.)

Posted by Johnna Kaplan at 7:47 AM