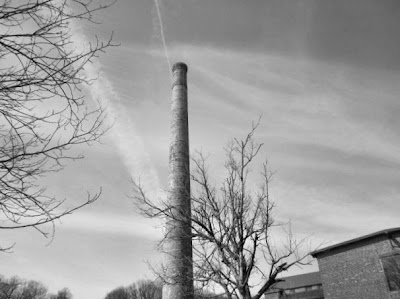 I had always wondered what was down that road, the one that sloped gently toward the water, where the trees half-concealed something hulking and seemingly abandoned. I had always been tempted to take that turn, the one just after the bridge over Oxoboxo Brook. I imagined some forgotten vestige of Connecticut's past was waiting there, as it so often is, some structure with shattered little windows and discolored bricks, that's gone unused so long that everyone forgets their town once woke and slept according to its demands.

And then one day I did make the turn. And I found...the past, yes, but the present too. 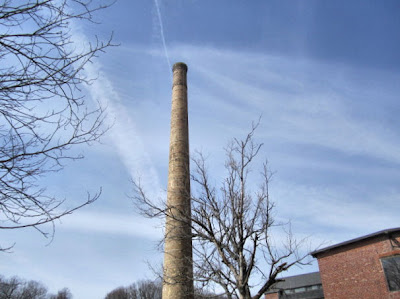 The Thomas G. Faria Corporation. They manufacture instrumentation. Theirs is an interesting story, actually. And it continues. Good for them. Good for Connecticut. But shallowly, in that moment, less good for me.

(Note: it's sometimes called the Oxoboxo River, but it says "Brook" on the sign at the crossing. If you like the word "Oxoboxo" - and how could you not? - you might also like some of its variants. My favorites of these are Oxyboxy and Absubogsuck.)
Posted by Johnna Kaplan at 7:50 AM