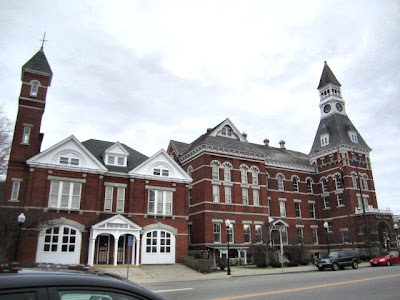 Thomaston, named for early 19th century clock-maker Seth Thomas, has many things. It has - as you would expect - several large, prominent clocks. It has what must be a record-setting number of distinctive, small, pleasantly crumbly-looking churches of different denominations. It has railroad tracks and dams. It has old factory buildings, glorious in their size and semi-decay. It has a little mini town green with a war monument. It has, I kid you not, an Electric Avenue.

But mostly, it has this. The Thomaston Opera House, which is also the Thomaston Town Hall, and the Thomaston Senior Center, and oh, who knows what else. It is probably best photographed from a helicopter or hot-air balloon, which I do not have. It is a darn impressive building.
Posted by Johnna Kaplan at 8:20 AM