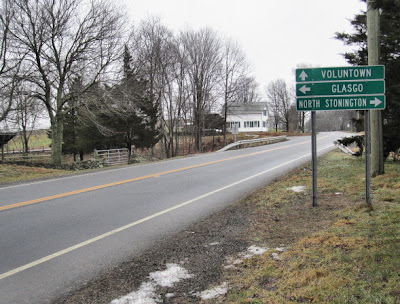 Most people who see the signs for Glasgo in Griswold probably think they know where the name came from. (Though initially they might think only, "Wait, there's a Glasgo?!") I assumed for years some immigrants had come to this place from the similarly named city across the Atlantic, misplacing their "w" along the way. This is, after all, the part of the state with a Baltic, a Hanover, a Versailles, and, well, a Scotland.

But no! This is one place-name story where the seemingly obvious answer is not only wrong, but so much less fun than the real answer.

The actual source of the village's name is Isaac Glasko, a tool maker and inventor who owned a  blacksmith shop here in the early 19th century. He was not Scottish, but of African and Native American descent. The land he purchased in 1806, on which he built his shop, was located at the intersection of Routes 165 and 201. This area, after an unexplained consonant swap, became the center of Glasgo.

Isaac's specialty was whaling implements, like "harpoons, lances, spades, and mining knives," so as a New Londoner I'd have to love this little bit of trivia even if I didn't already. His tools were crafted with a water powered trip hammer, which even if you don't fully understand how that works, it certainly sounds impressive, right?

His daughter Eliza was a pupil of Connecticut State Heroine Prudence Crandall, attending her academy in Canterbury. (Another place on the list.)

Isaac and his wife are buried in a cemetery in Glasgo. The day I went to see where it was, the ground was very soggy, not ideal for traipsing through grass and brush and who knows what else to get there. You can also reach the cemetery by crossing through some private property, but I have to say that my desire to trespass all over rural Connecticut has severely abated of late. I'm sure it will return eventually.

But I am planning to get back to Griswold soon and traipse legally, on a day when I''m less likely sink into three feet of mud.
Posted by Johnna Kaplan at 8:40 AM