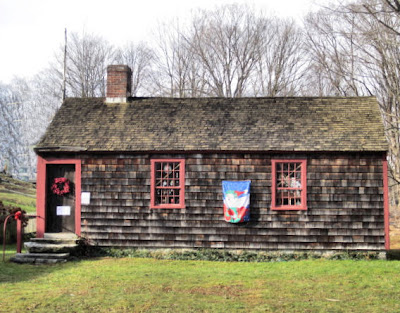 Ever since I found one of Monroe's old schoolhouses by mistake, I've been meaning to go back and find the other one. This is it, the East Village Barn Hill Schoolhouse, now owned by the Monroe Historical Society. It dates from c. 1790.

Because there have been a few schoolhouses on the blog recently, I was going to wait to post this later in the winter. And then last Friday one of the worst school shootings in our nation's history took place just one town over.

I never intended for this blog to have anything to do with state or local news; there are plenty of other good sites for that. (See the "More Connecticut" thingy on the right of the page for a few of them.) But occasionally news gives me little choice.

I grew up about 40 minutes south of Newtown, in a town that's not the same (no two CT towns are) but is about the same size and often described with a lot of the same adjectives I keep hearing applied to Newtown on the news. I remember watching the attack at Columbine on TV and thinking, this is Fairfield County. Among my friends there was none of that "this can't happen here" stuff. We never thought of an elementary school, but we knew, back in 1999: This will happen here.

My mom worked at the high school I attended for years after I made my escape. I worried every day till she retired that some kid who, like me, had been failed or ignored or embittered by that place but who, unlike me, didn't have good parents and future goals and mental health, would decide that would be the day that school, and that town, would pay.

I photograph old school buildings because they're cute, the architectural equivalent of kittens, and also because I like the fact that so many have been preserved unintentionally, forgotten about or re-purposed or just left to fend for themselves.

They also seem, to someone who often feared going to school (though not for reasons of physical safety), so harmless compared to today's cold brick edifices. That's not to say that everything in the olden days was all happiness and lunch-pails, or that tragedies never unfolded within these small rooms. Just that I realized something on Friday about one-room schoolhouses, silly as it sounds: they look like places where the children of Connecticut were safe.
Posted by Johnna Kaplan at 7:45 AM