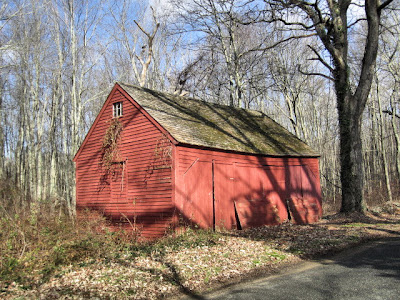 It's been a whole month since I last posted a schoolhouse. We can't have that!

This one is in Salem and I found it because of...Wikipedia. Yes, I am ashamed. But not so ashamed that I'm going to lie and say I had some secret insider knowledge of Salem, or worse, not post it at all. I don't recall when or why I first read the Wikipedia entry on Salem (though it may have had to do with Music Vale) but it included this snippet of impossible-to-confirm information: "During its early years, Salem had several schoolhouses scattered throughout town, like most New England communities of the time; one is still visible on White Birch Road." (Over-excited bold italics mine.)

Impossible, that is, until I drove down White Birch Road and found it. Or, what I assumed must be it. The building looked one more storm away from collapse. Weeds sprung from it; it was becoming a chia-school. The doors, held together by some invisible internal lock, attempted to flap open in the wind.

I looked at it closely. Maybe it was only a barn, or a shed.

But I chose to believe it was a school.

Posted by Johnna Kaplan at 7:37 AM