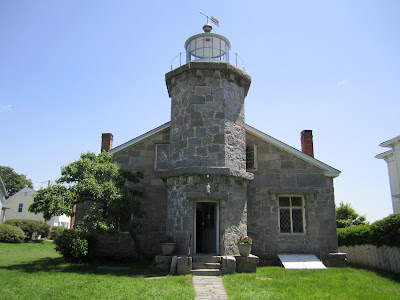 I was in Groton recently, and I stopped at UCONN's Avery Point Campus, where the lighthouse is. I realized that this blog, aside from needing more cities, needs more lighthouses. And I remembered that although I've taken many pictures of Stonington's lighthouse over the years, I've never written about it here. The picture above was taken for this article, in which I suggested things to do on a day trip to Stonington Borough. One of them, of course, was a visit to the Old Lighthouse Museum. The museum is quite small, but it has a really interesting and varied collection; it's the perfect sort of place to stop for a half hour when you want to feel all virtuous and edumacated in between shopping, ogling other people's houses, and staring at the water. There's some Stonington Pottery, which I love, and other artifacts of the town's life and work in ages past. There's also an old cistern visible through a glass floor, and a rocket (as in "the rockets' red glare"), and a whirligig. (Whirligig!) 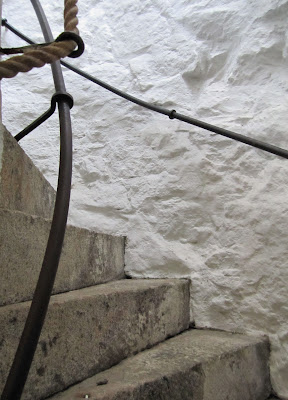 And you can climb up the steep spiral staircase to the top for a beautiful view. (Oh and there's a gift shop, where I bought a little replica of a cannon - like the ones in Cannon Square - which Borough residents used to defeat the British Navy in the Battle of Stonington in 1814. Now it sits on my windowsill, so if my street is ever invaded by very tiny British troops, I'll be prepared.)  Even when the museum is not open, it's always nice to walk past the lighthouse building on your way to Stonington Point.

So, that's one more lighthouse. And I'll have a post about another lighthouse that managed to slip through the cracks of my memory on Monday.

Posted by Johnna Kaplan at 7:36 AM