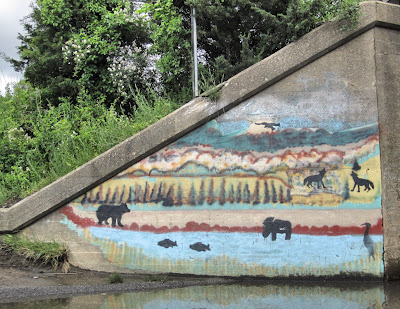 I didn't like nature at all until I was 25. I liked cities, the citier the better, and though Central Park was nice, I didn't want to have to, like, sit on the ground or anything. I was cured of this by being thrown head-first into a situation involving not infrequent hiking and camping in the desert. This was the kind of camping where you have a sleeping bag but no tent, where you stuff socks in your shoes while you sleep so scorpions can't huddle inside, and where guys with guns keep watch at night. Nothing about it was particularly difficult; I'm sure in the world of hiking and camping, everything I've done is laughably lame. But coming from "Eew, I got dirt on my sneaker," it was fairly extreme. Maybe taking some smaller, preparatory steps first - like a visit to the Botanical Gardens - would work better for most people, but extremes work for me. And now I love the outdoors: meadows, marches, forests, wild barren expanses of scrub and sand, glacial Connecticut rock formations, and all kinds of beach (though beaches were always sort of exempt from my aversion.)

But, though I've learned to appreciate being in the unspoiled middle of nowhere, I still find it reassuring when the wild and urban worlds intersect. Hence my fondness for this mural (or is it graffiti? or...murffiti?) in Groton. A nature scene on a concrete wall next to a Coastal Reserve next to some railroad tracks and an airport. It's ironic, but not entirely - maybe it's so ironic, that it goes all the way around and comes out earnest again. It's like a modern-day cave painting. (It also sort of reminds me of a souvenir blanket you could buy in New Mexico.) It says: don't be afraid, city person - the wolves have been replaced with depictions of wolves, and though there is wilderness, it's never too far from an overpass, and a paved road.
Posted by Johnna Kaplan at 8:36 AM