With Liberty and Mileage For All 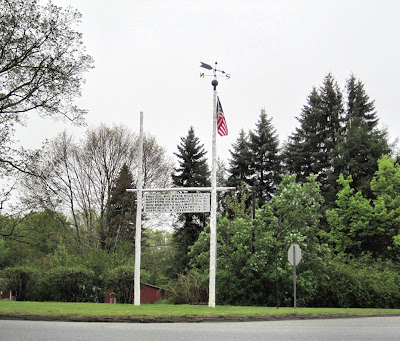 The Quiet Corner, you could say, is full of quiet corners. Corners on which you might find a very old inn, or a fence through which cows stare mournfully at occasional passing cars, or who knows what. On this corner, in Hampton, you can find a liberty pole, erected in 1849. It says:


(I should note that my fractions of miles might be incorrect, since there's a limit to how close I could zoom in. Not because I thought you were going to plan your journey to Willimantic down to the 1/2 mile based on what's written on a piece of wood at an intersection, but just to be upfront.)

I personally would not have thought "liberty pole" on seeing this, but that's what it's called all over the internet. And what's sort of weird about that is, as far as I know 1849 is really late for liberty poles. They're a Revolutionary War era thing, and I've read about them being raised during the Whiskey Rebellion as well. But 1849? Against whom, I wonder, did the citizens of Hampton think they were rebelling? What exactly was Jonathan Clark, who put up this pole at what is still known as Clark's Corner, trying to say? For a second I wondered if he might have come early to the sentiments of the Union during the Civil War, then I remembered, it was the South that seceded. Oh well.

Either I'm missing something entirely obvious, or Clark was just the kind of guy who'd do something wacky and all out of date. Maybe he was a member of some obscure political movement that I don't know about and no one thinks to mention anymore when writing about this liberty pole. Or maybe it's not a liberty pole at all, but simply a flag pole with an old directional sign, except no one wants to say that because that doesn't sound as good. (Though they needn't worry; the one in Harwinton is excellent, and it doesn't even have a flag or a pole of any kind.)

Or maybe it doesn't matter. Maybe sometimes, it's just nice to drive through the countryside taking in the scenery, without trying too hard to determine when and why the scenery was built.

But seriously, this is going to bug me till I find out, so please leave a comment if you know!

Posted by Johnna Kaplan at 8:13 AM