A Bridge Too Quiet 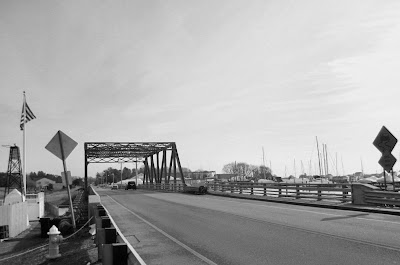 For reasons I don't understand, I tend to conflate Westbrook and Branford. It makes no sense; they're not even next to each other. Westbrook is in Middlesex County, and has outlet stores and a laid-back beachy feel. Branford is in New Haven County, and has a charming but not showy downtown area that for some reason seems to me like it belongs more in Massachusetts. Westbrook starts with a W, and Branford starts with a B. But until I stop to really think about this, there's always a moment where I can't separate them. (They're not alone, at least - don't get me started on Meriden and Monroe.)

But now I have another distinguishing feature to help differentiate the two: Westbrook has a singing bridge. It's called the Singing Bridge. It's a bridge, and it, well, sings. Supposedly. I've encountered it many times before, since it carries Route 1 over the Patchogue River. (Spell-check wants Patchogue to be Patchouli.) But I'd never noticed the sound, said to resemble a human voice singing a high note, that results when a car drives over the bridge.

And after driving over it three times just to make sure, and listening as other cars drove over it too, I have to report that it does not sing. It merely makes that lovely tires-on-steel noise that all similar bridges make. Then again, maybe you have to be special to hear it. Maybe not hearing it is punishment for confusing Westbrook with Branford.
Posted by Johnna Kaplan at 10:35 AM