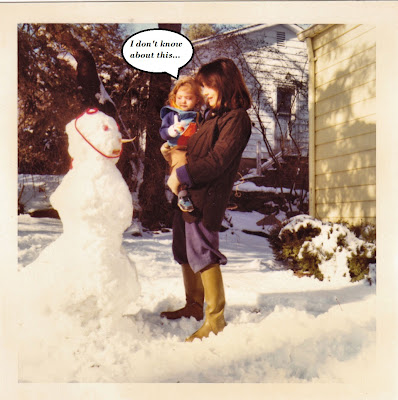 Usually when I read books I underline passages and write things like "!!" and "ha!" and "?" in the margins. Sometimes I write snarky little comments which embarrass me when I re-read the book years later. I have a few books containing descriptions of weather conditions endured by people of the past. They'll recount entire winters spent huddled inside tents or huts or insufficiently insulated houses, difficult hunts for frequently non-existent game, people freezing into massive icicles while walking home and being found beneath the drifts in the spring, etc. And most of those have little scribbles next to them that say something like "why do you live there?!?"

I ask myself this too, every winter. When it turns colder, then again when the first frost glazes over my windshield one morning, and again, louder, every time it snows. Clearly - I dug through old pictures to prove it - I sensed from an early age that Northeastern winters were maybe not for me. And yet, though I've spent a few years in a few different places where winter isn't entirely horrible, I've always come back. And I don't know why. I can make a list of good things about winter, about snow even. But the prettiness of gently falling snowflakes doesn't outweigh the fact that they render streets impassable to all but snowplows and children on sleds. The crisp smell of winter air doesn't make up for the way it ruins my skin and closes my lungs on contact.

And yet here I am. Still looking at the winter with mistrust and confusion, as I was in 1979.

Email ThisBlogThis!Share to TwitterShare to FacebookShare to Pinterest
Labels: Misc.