Living On the Edges 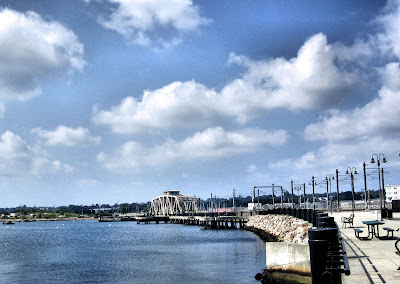 There's one aspect of living in New London that I didn't really discover, or didn't think about, until maybe last Fall. When you live in a small city, you can see its ragged, faded edges. Big cities have edges too, obviously, outskirts and borders and riverfronts. But you can't always access them easily and quickly, and you can't always see them in an unfinished state. I never thought, when I used to walk along the East River, here is where Manhattan stops. Because the FDR Drive and the East River Esplanade (which I don't think I ever called the East River Esplanade when I lived there) are so developed, you aren't seeing any of New York's secrets when you walk there.

But in New London, when you walk or drive down to the Thames, when you follow the less-traveled roads that lead to docks and railroad tracks, you are seeing how the city works, or how it used to; where it ends and where its life (all the fishing, the arriving and departing, the unloading of goods) begins. When you stand near Custom House Pier and look back towards Bank Street, you see the back end of the town, like the visible seams of a garment turned inside-out.

Sometimes I wish New England towns would face their rivers like Midwestern towns do. That way is more pleasant. But the lack of openness in the New England arrangement adds a certain intrigue those friendlier places lack. It comes from seeing what you aren't supposed to see, and at the same time being allowed to see what other, ostensibly more open towns, will not show. I wonder what people who have seen New London only from this vantage point think as they pass through on the Acela. Do they assume the entirety of the city is this, its hard edge? Or do they wonder what is up there, hidden, waiting on the other side?
Posted by Johnna Kaplan at 6:21 PM