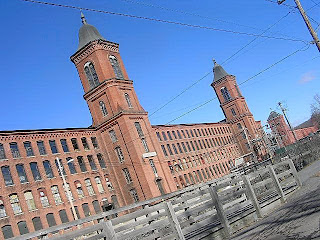 There is a town up there, or a piece of one; there is something on the map, between the site of the nation's only four-train collision and the lake that might possess the longest place-name in the country. The road goes north, so I drive up, past the idyllic picnic spots, past the strangely eerie dam where a stand of impossibly tall trees extends into the water as if they're marching. I drive for 10 minutes but it feels longer. The road runs parallel to the partially frozen river, past a metal water-tower right out of the Midwest circa 1950 , past a crumbling brick structure like a relic from a lost civilization.

Then I reach the town, or the piece of one. (Technically, I learn, it's a village, but it's an intersection, really.) It has been over two years since I moved back to Connecticut, four months of which I have lived in this rural empty pocket of the state. I am still absorbing the fact that there are so many discoveries to be made here, and that each one answers nothing, but only offers up more questions. Because of this I have no expectations of this village, which is fortunate, because it couldn't have matched them. When I list its features to myself, it sounds ordinary. It has more than the usual complement of churches. It has a sprawling mill dominating from a hilltop, its red bricks seemingly held together by an overpowering memory of a whole world that has been lost. It has a waterfront park that looks sterile in the cold, and snow-plow defying hills. It has a new coffee shop in a smart little house with white shutters and a tricolor "Open" sign waving in the wind. But it has other things harder to list, things that cast a pall of strangeness over the place. Rusted metal, and faded lettering on weathered facades, and orange "No Trespassing" signs in front of abandoned buildings with boarded-up windows. A row of wooden crosses on a hill overlooking a parking lot and a row of sharp stones balanced atop a wall on a hilly side street (a pagan monument, or evidence of boredom, or evidence of a pagan monument to boredom, who can say?) Railroad tracks that have a long-unused aura about them, except for the warnings and lights at the crossings; then again, something about the lights suggests they haven't lit up in a long time. It is a place intended for those who know it already - it has no need to explain itself to me. I stay a short time, and though I am driving on public roads, like I'm nosily peering behind curtains.

Then the town seems to usher me away, not out of malice, but in the manner of a person who has unwillingly told a secret and now asks, politely, that you leave and forget. I remember that the road goes south too, and I take it, feeling satisfied, almost, feeling like I still don't know what's up there, but I know as much as I can.
Posted by Johnna Kaplan at 7:24 PM