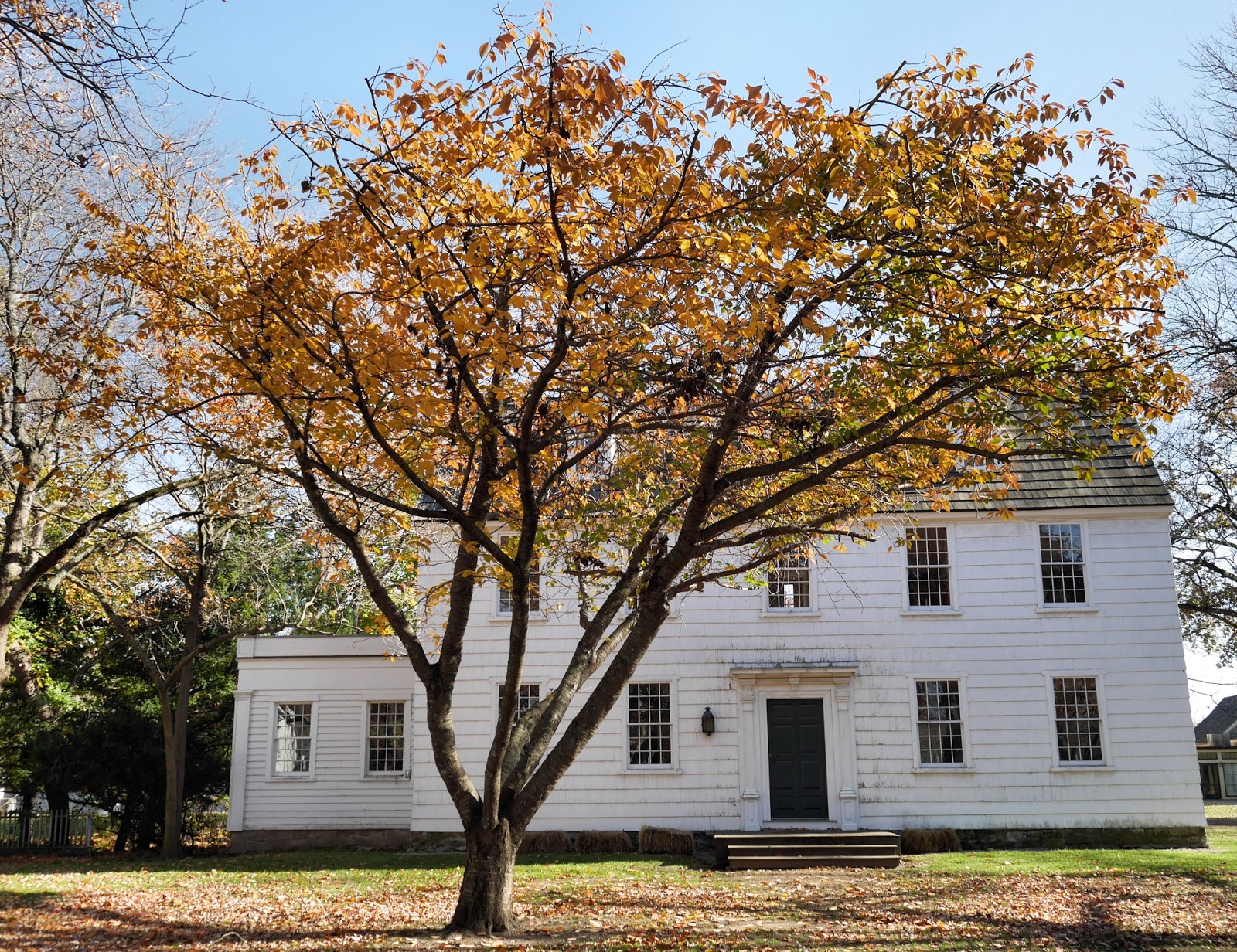 Walk past the Fairfield Public Library, toward the beach and away from downtown's restaurants and boutiques. Instantly, you'll find yourself in an older, calmer Fairfield, where magnificent trees partially conceal historic buildings like the Sun Tavern, above, built around 1780. George Washington probably slept here in 1789; during his visit that year, a decade after British troops under General William Tryon burned the town, he noted that “the destructive evidences of British cruelty are yet visible both in Norwalk and Fairfield, as there are chimneys of many burnt houses standing in them yet.” 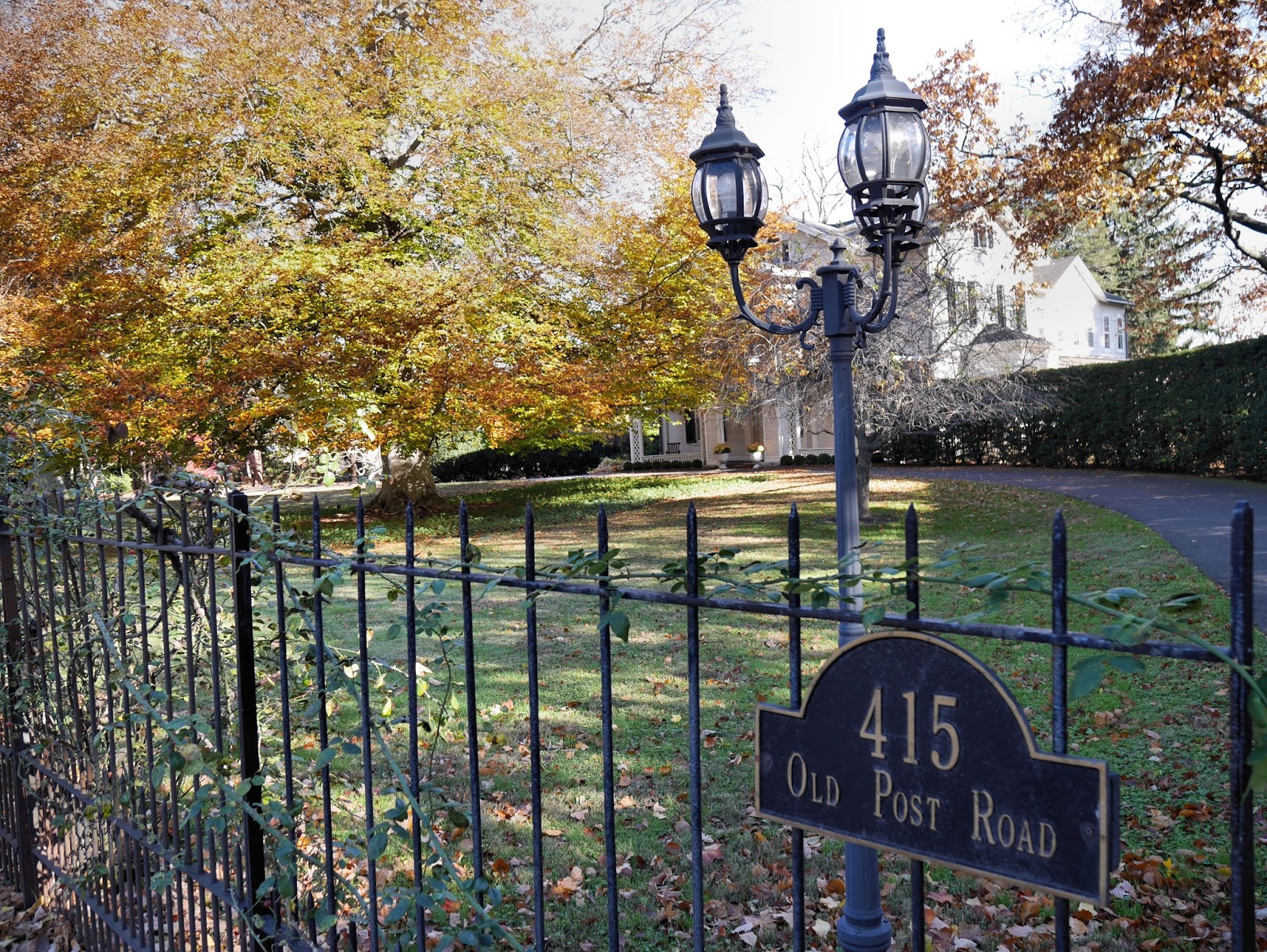 A number of houses in the Fairfield Historic District (aka the Old Post Road Historic District) that survived those raids are marked by small white plaques. (The burning of Fairfield is also cheekily commemorated by these guys.) There are many small touches like that here, little details you'd probably miss if you drove by in a car. When you get out and walk around the neighborhood, these details start to pile up, and the startling amount of history packed into these few blocks starts to feel a little overwhelming. 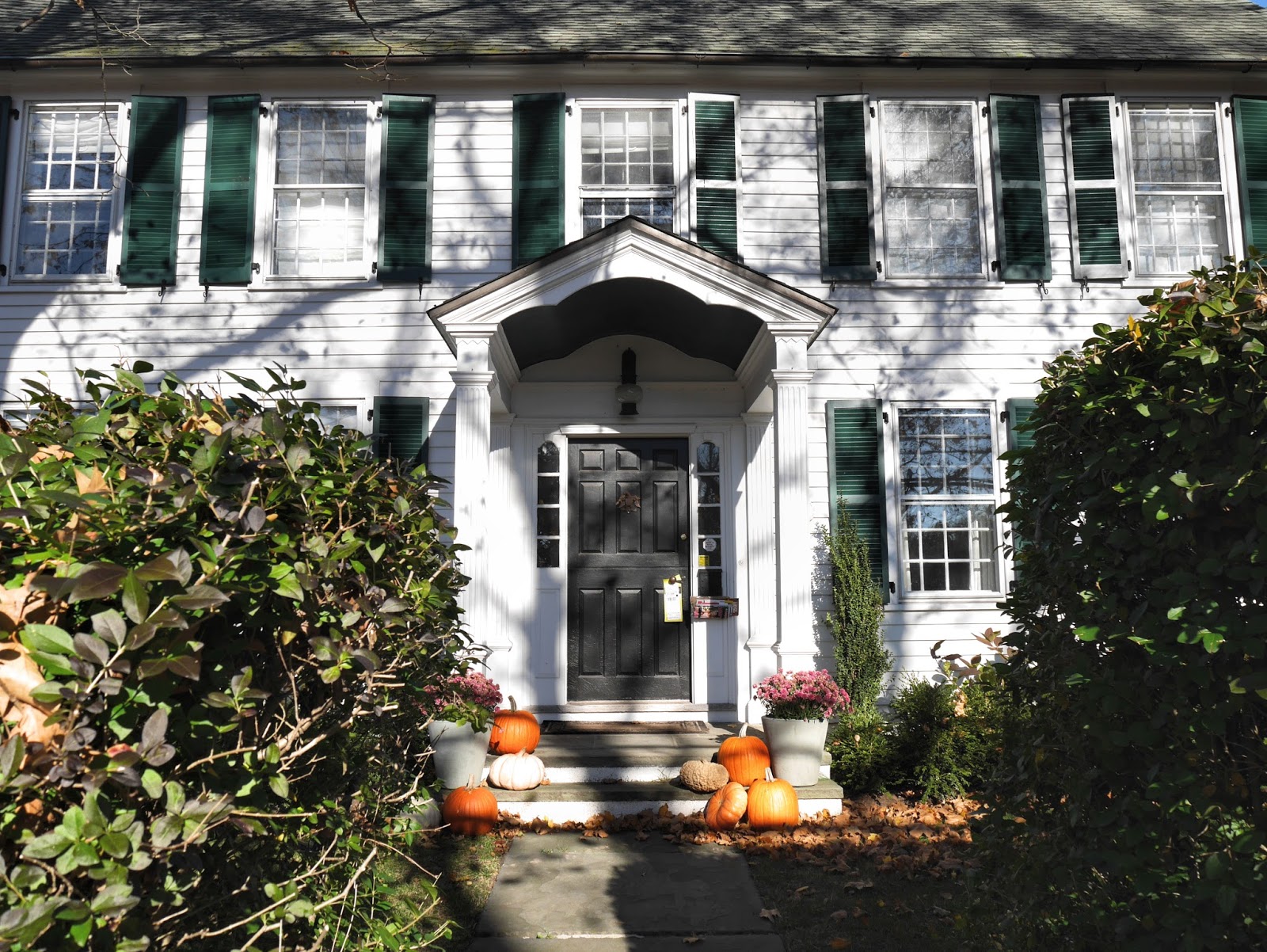 Looking at this busy, upscale town today, it's easy to forget that although Fairfield was rebuilt after the war, it never really returned to its former prominence. 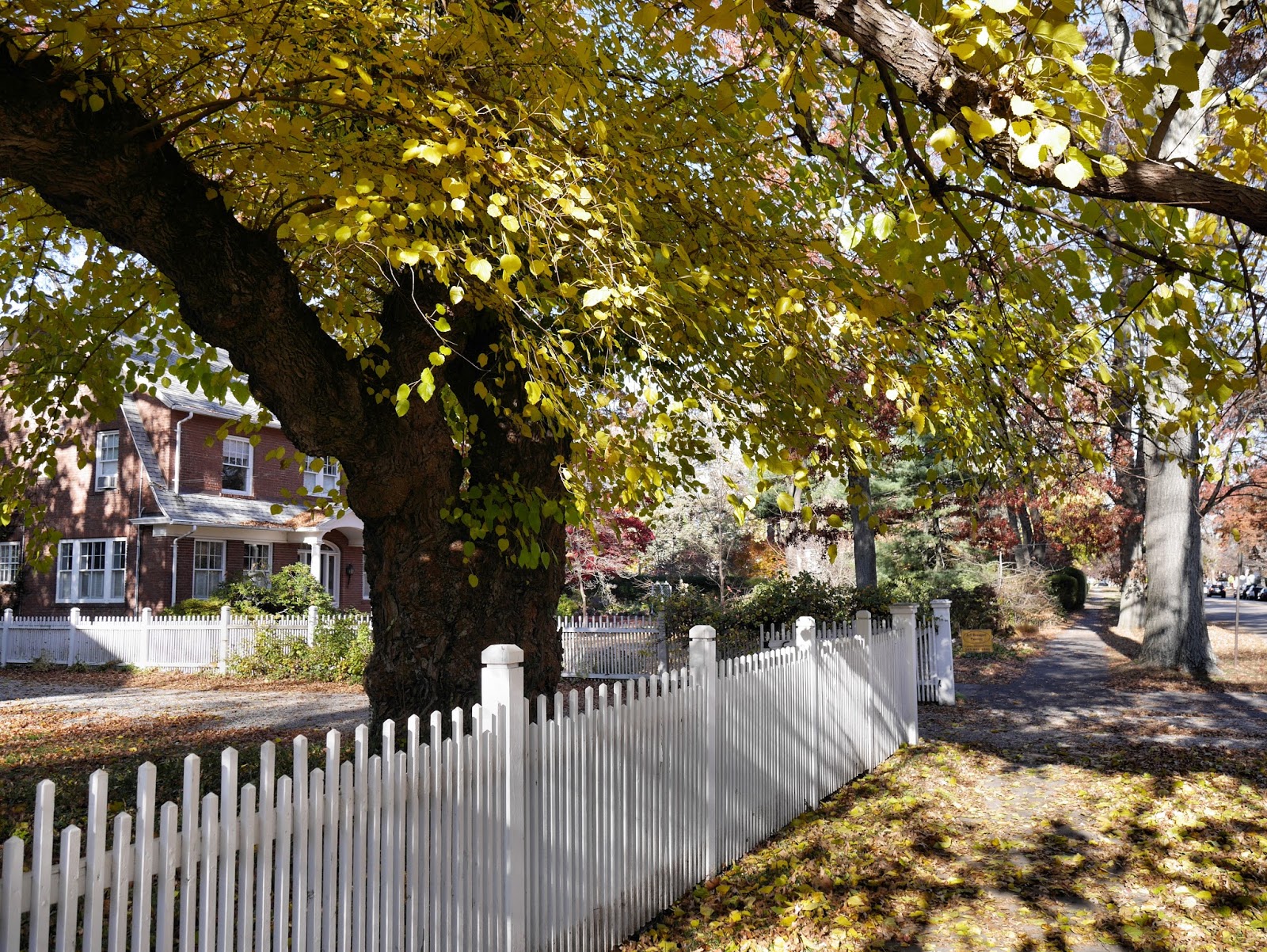 It's also easy to forget, in this enclave of prosperity and picket fences, that Fairfield was targeted by the British because it - along with several other coastal Connecticut towns - was considered a hotbed of resistance. 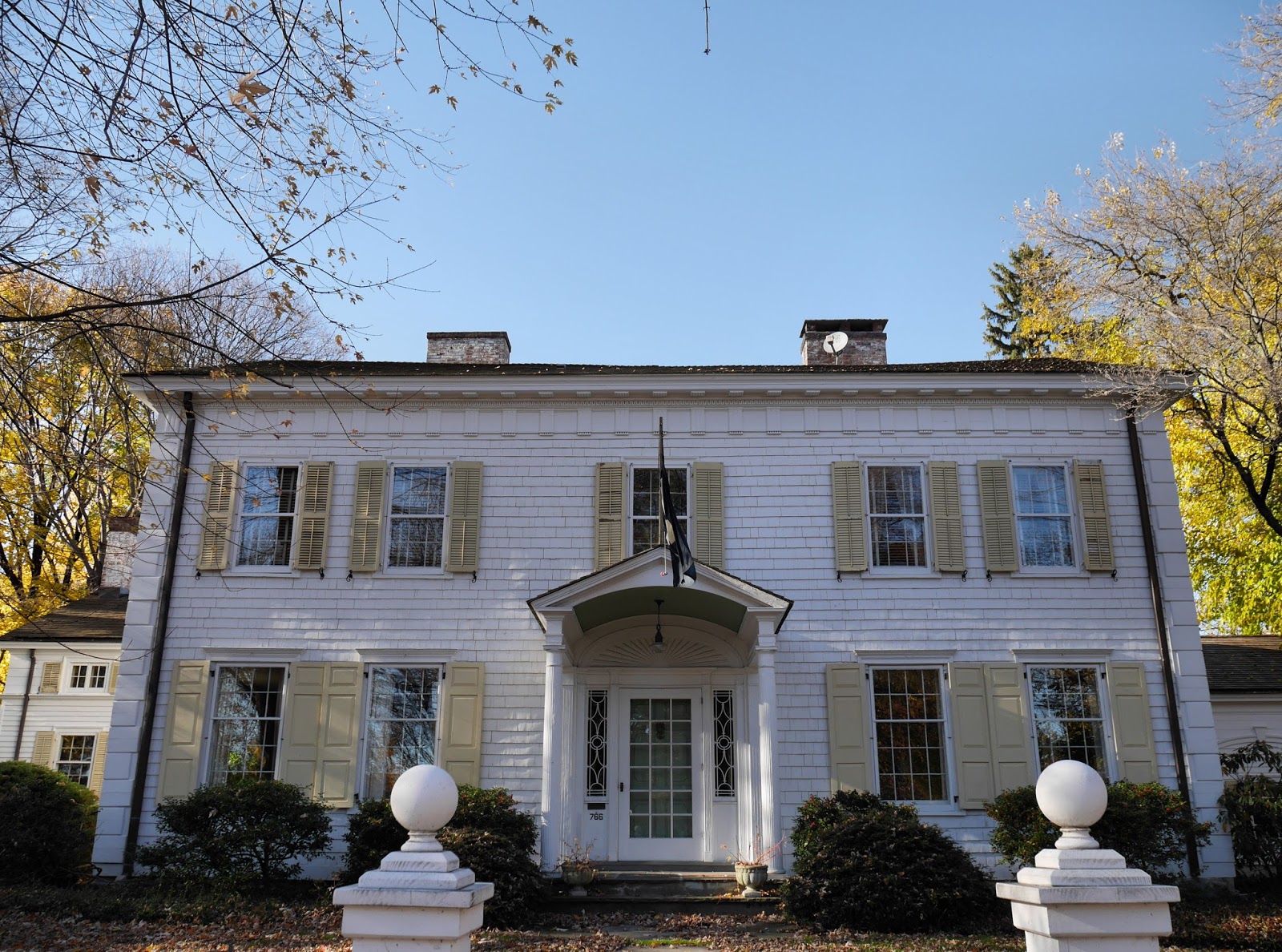 When British ships were spotted off the coast, townspeople scrambled to prepare. "With feelings of dread and uncertainty," to quote a paper published by the Fairfield Museum and History Center, "residents prepared to defend the town. Livestock was driven to safety. In haste, people gathered their possessions, hiding their valuable silver in wells and stonewall crevices. Some loaded wagons with household goods and food, and took refuge inland. Others stayed to defend the town. A few remained in their homes, believing the British would not harm them. No one predicted the extent of destruction that was about to occur."

Those who stayed fought fiercely, angering Tryon. "In retaliation he began burning homes one by one. The terrifying scene became even more dramatic at night; a lightning storm illuminated the sky, making the flames visible to distant observers. But the greatest damage was inflicted on the following day as the British left Fairfield. A rear guard of German mercenaries had been ordered to cover the withdrawal. In the face of furious inhabitants, they set fire to virtually all the buildings, including the churches and ministers’ homes, which Tryon had given protection." 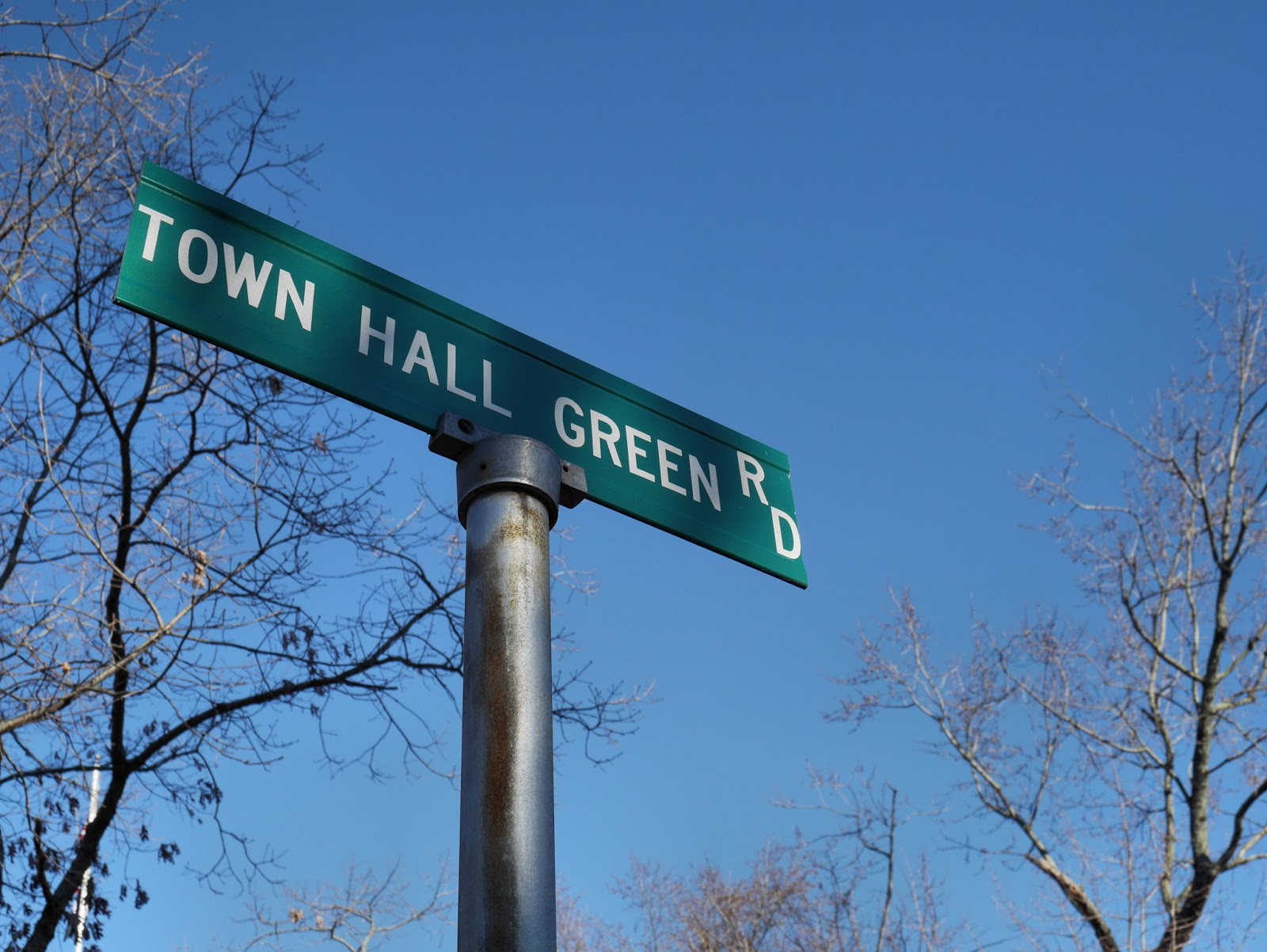 But the story of this district begins long before the Revolution. 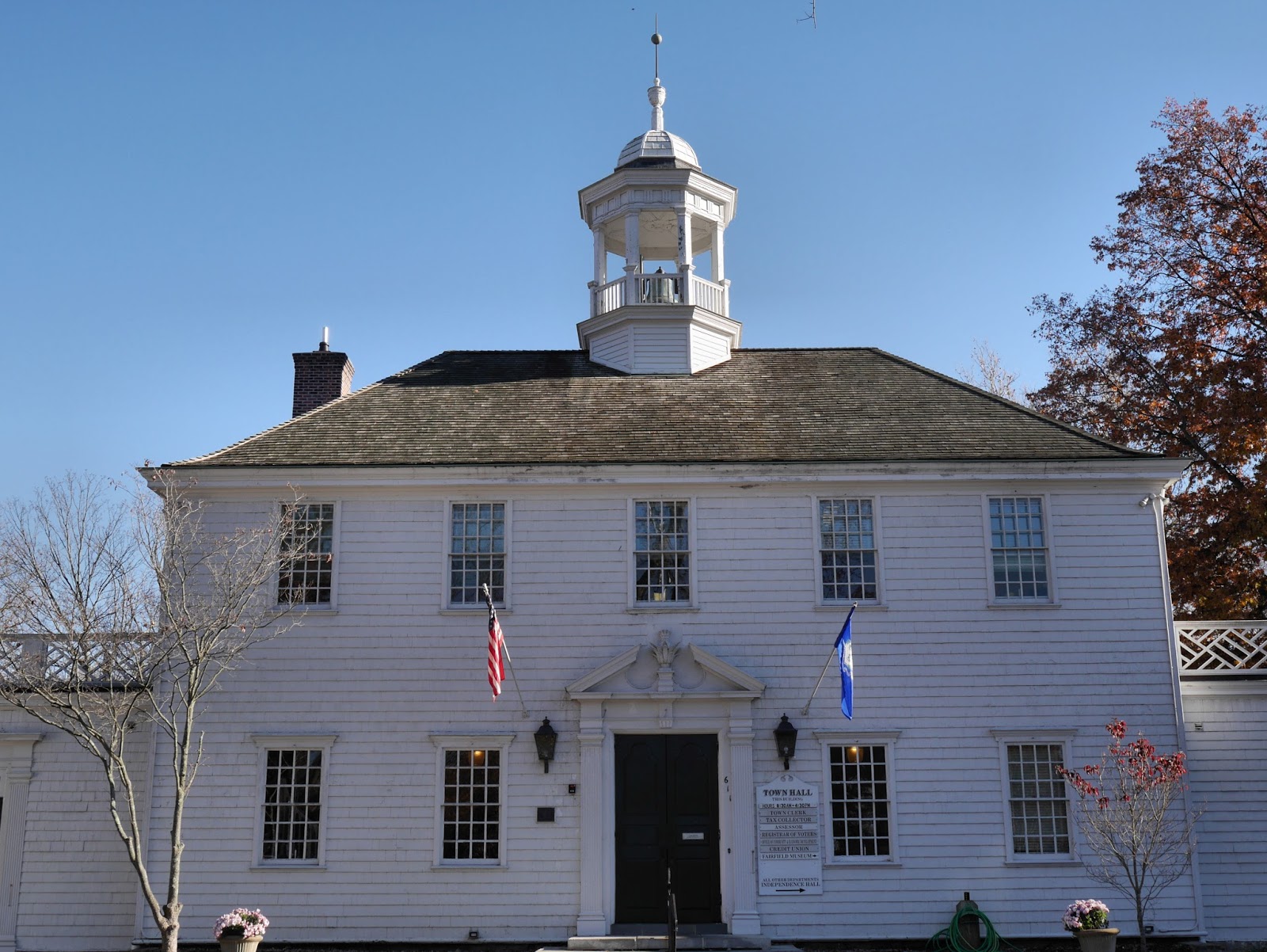 After Fairfield's founder, Roger Ludlow, purchased this land from the Pequonnock Indians in 1639, he and his cohorts divided the town into four squares. "Newton Square contained the parsonage land for the use of the minister; Frost Square was, for the Meeting House, the Court House, the School House, and a third square, Burr Square was for a military or public park with a place for a burying ground, the fourth square contained land for the founder of the town."

The Town Hall building, above, was constructed around 1794 to replace an earlier structure that had been burned in 1799. It was updated in the 1870s and then restored to the 1794 version in the 1930s. As I waited to take this picture, two preppy middle-aged men stood on the front steps, eagerly and obliviously discussing what I imagined was some trivial question about zoning laws, as I suppose the English settlers of Fairfield must have done over 300 years ago. 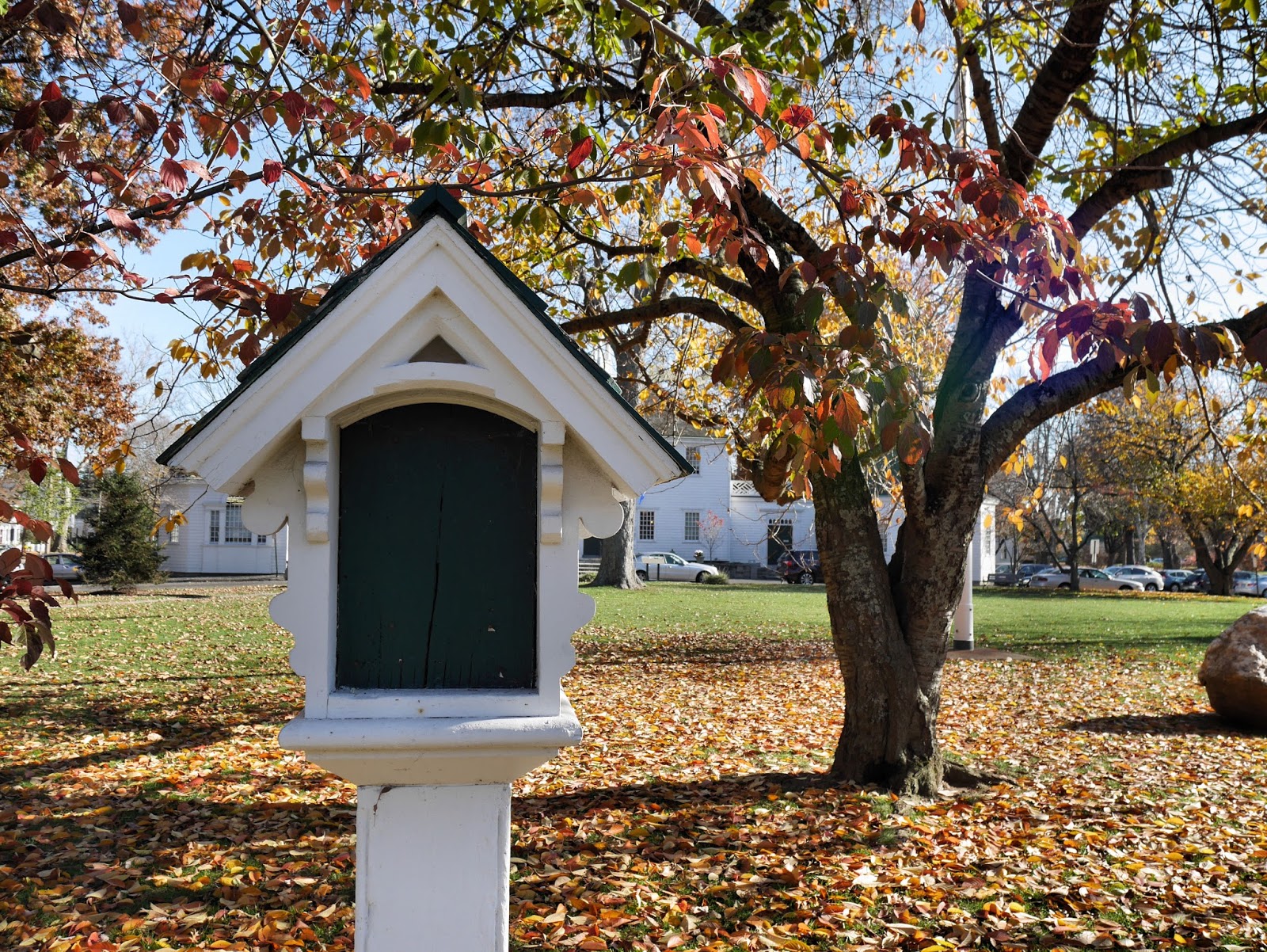 Ludlow - who Fairfield's official website describes as "arrogant" - first noted the desirability of this land two years earlier, when he managed to take a moment during the Great Swamp Fight to realize that if the English managed to kill or otherwise drive out the Pequot for good, this would be an excellent spot to build some houses that future Connecticutians could drool over on Zillow. 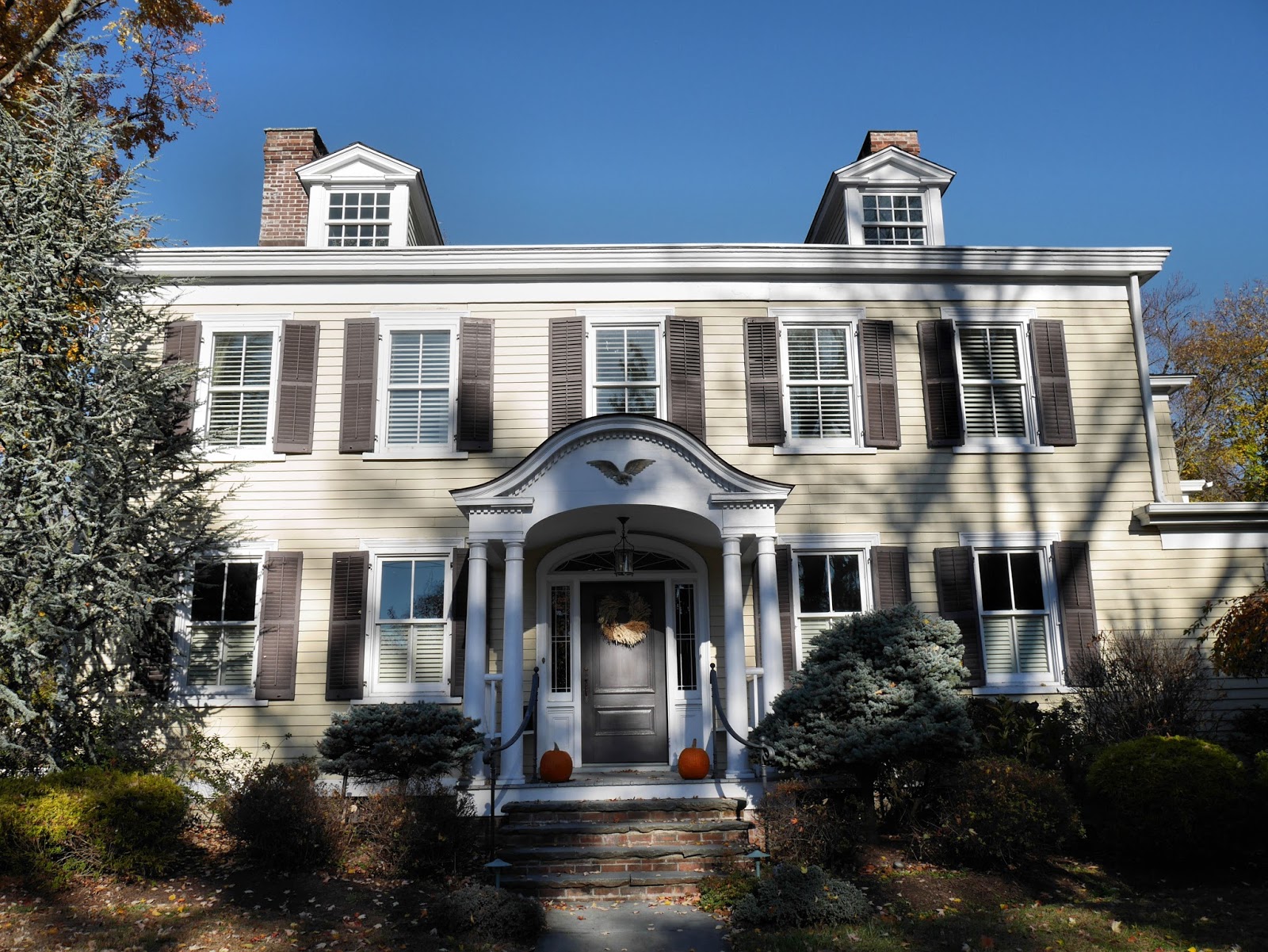 This one, for example, was built either in the 1780s or in 1779. Both dates could be correct, if the home was partly burned, then restored. 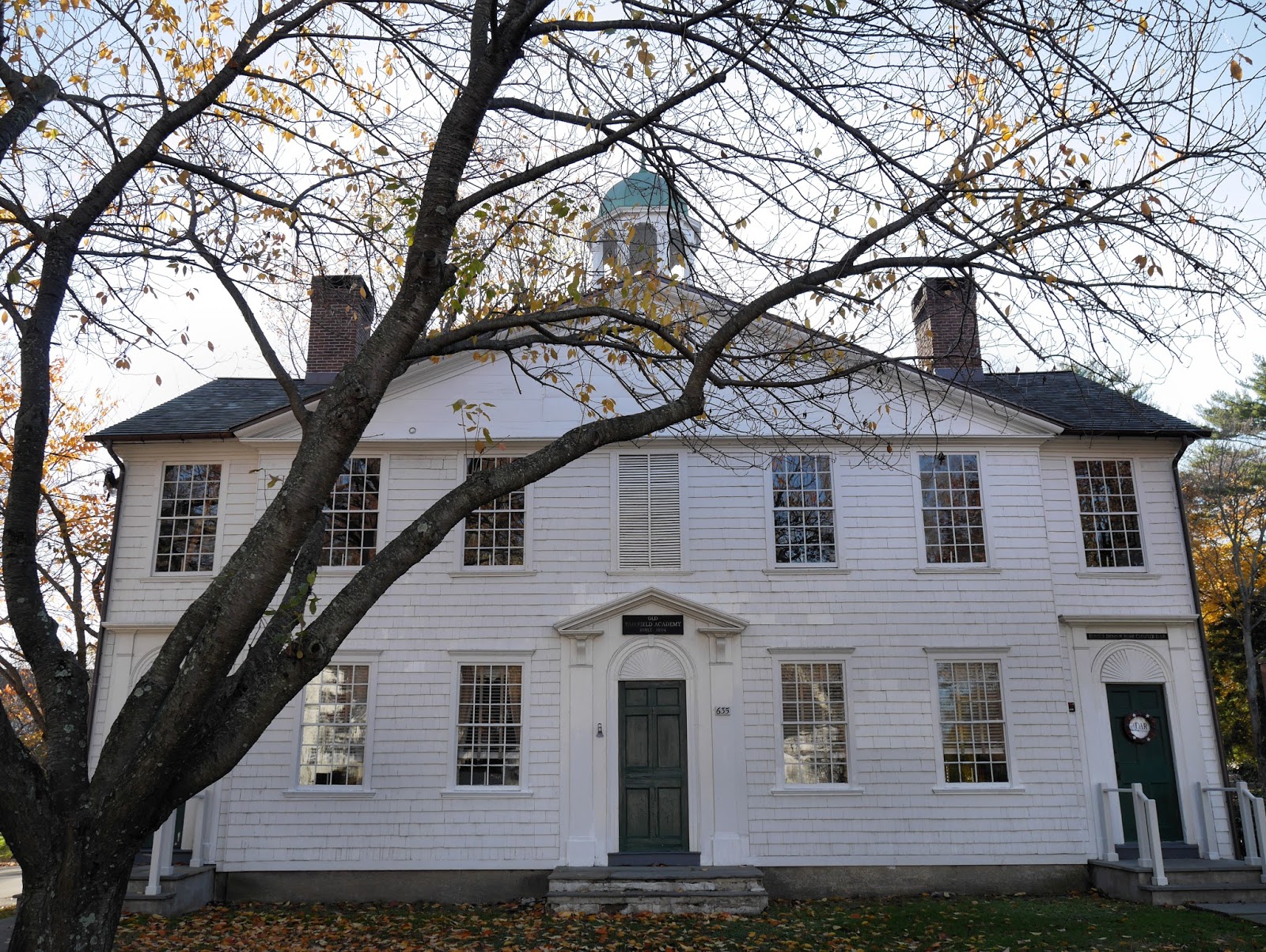 Fairfield Academy, also called the Old Academy, was built in 1804. Here boys and girls - a rarity at the time - studied subjects like Greek, algebra, geography, and oratory. A sign on the property describes how they "wrote in ink with quill pens," and explains that punishments for misbehavior included "shaking, thumping the head and pulling the ears and hair." (By the way, Fairfield Academy is the latest historic school to join my collection at OldSchoolCT on Instagram.) 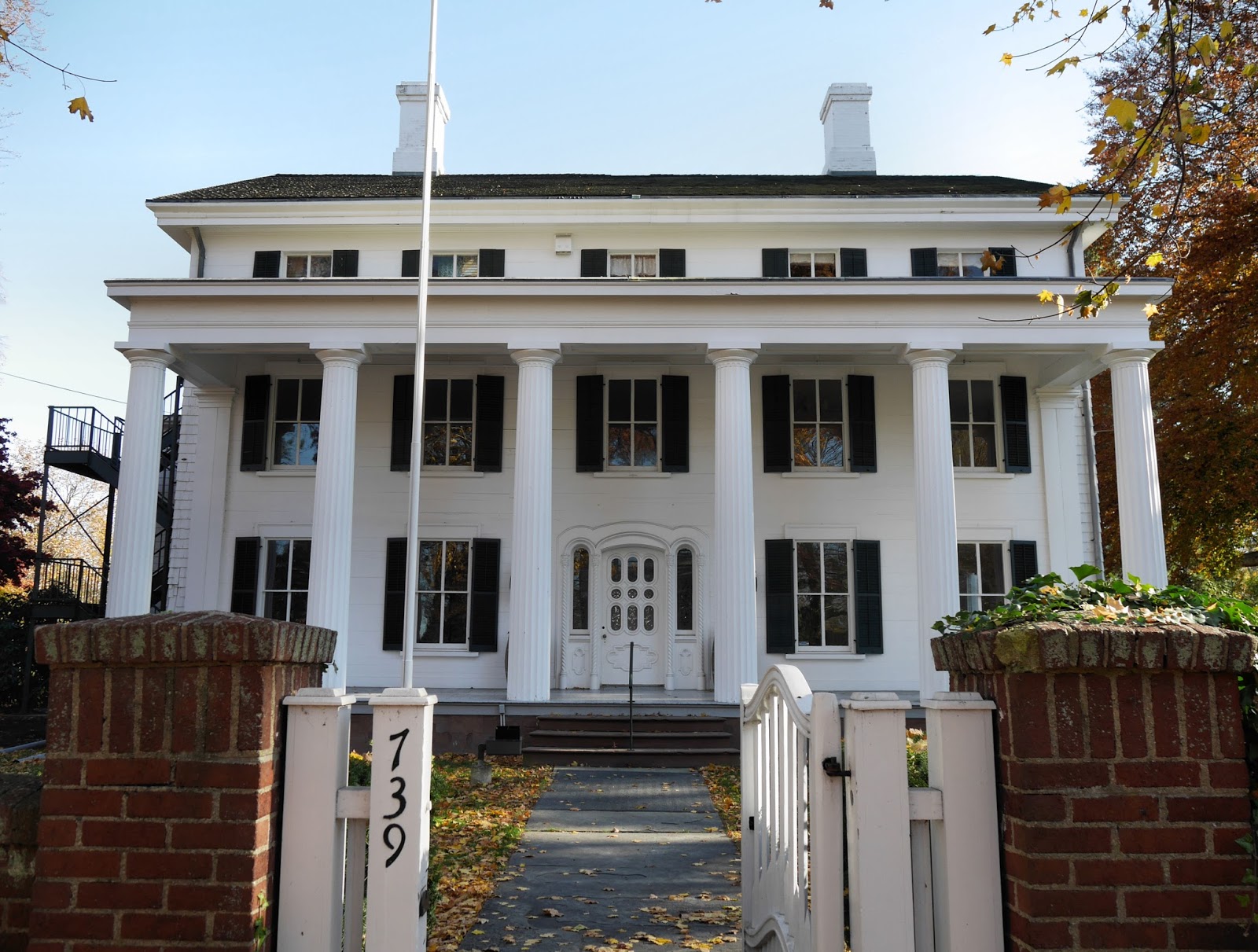 The Burr Homestead, built - well, rebuilt - in 1790, is now a venue for weddings and other fancy events. That's not a drastic departure from its original use. Once upon a time, Thaddeus and Eunice Burr hosted Colonial-era luminaries such as George Washington, Samuel Adams, John Adams and, yes, Aaron Burr, here. A historic marker on the sidewalk notes that in 1775, John Hancock, President of the Continental Congress and first signer of the Declaration of Independence, married Dorothy Quincy here. 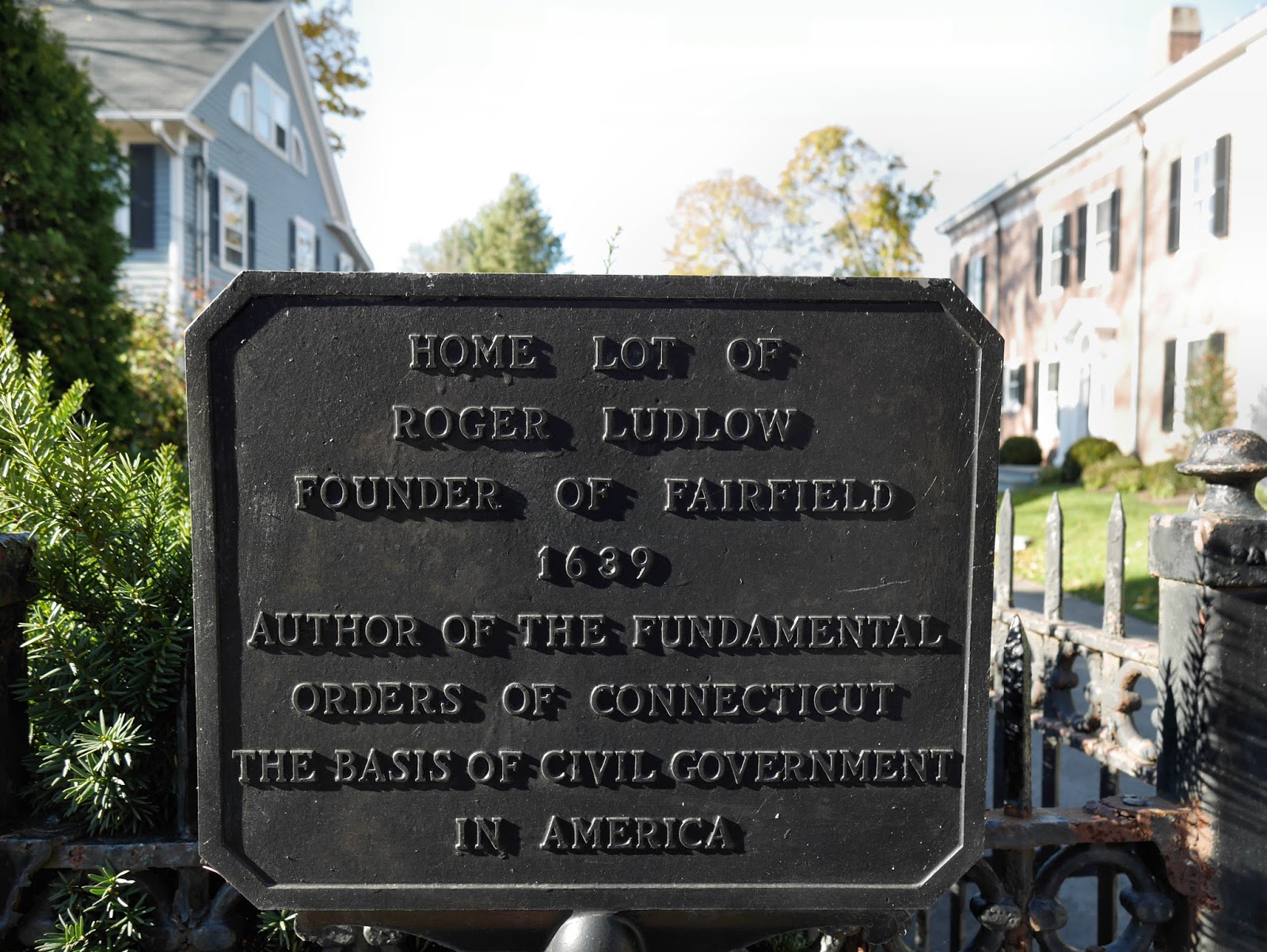 But amid all these venerable buildings, perhaps my favorite find here was the space where a building used to be. The Fundamental Orders have been called the first written constitution, paving the way for the U.S. Constitution (and explaining Connecticut's "Constitution State" nickname.) The document itself is dry and intensely Christian. Still, there is something inspiring about a small group of people, representing a few towns in the region "in and upon the River of Connectecotte," gathering to establish an "orderly and decent Government...to order and dispose of the affairs of the people at all seasons as occasion shall require." 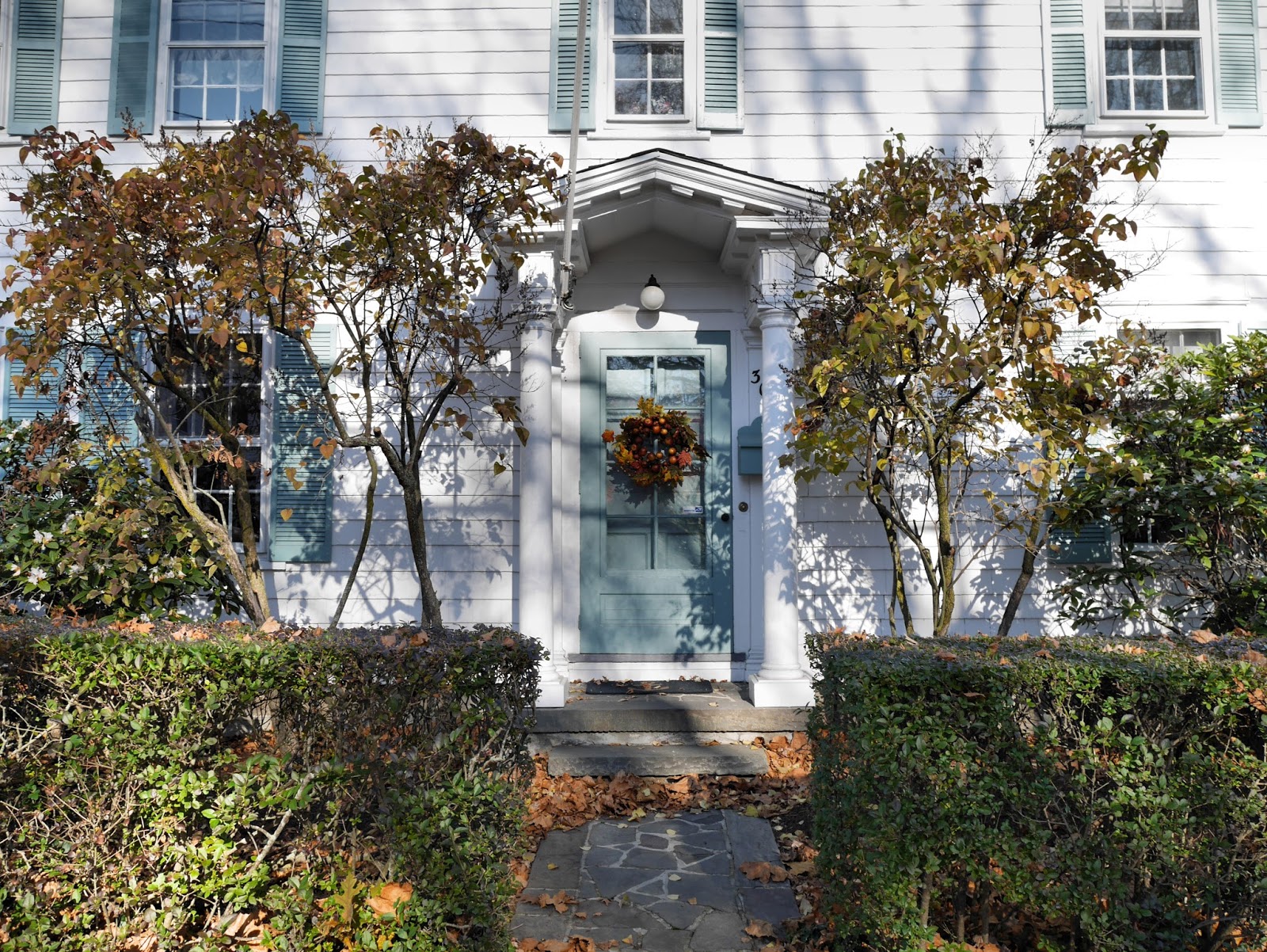 Before Fairfield and its neighboring towns existed, this part of southwestern Connecticut was called Uncowaye (also rendered Unquowa, among other spellings), meaning "looking forward - a valley." I travel to a lot of historic districts, and, like the nerd that I am, wander around thinking about the history they represent. But all the people who made that history, willingly or unwillingly, by design or by accident, were not looking backwards. They may have recognized that they were living though momentous times, but they weren't thinking of the events they experienced as something that would soon be finished and topped with a plaque. They were looking forward, with hope for the future, or fear. They didn't know if their home would be destroyed, if their family would be chased down and massacred, if they would win or lose the war, or if their nation would survive. Remembering that makes places like this seem a little less perfect, as it recalls the tragedies just beneath the prettily-painted surface. But it also makes them seem more worthy of appreciation now, because it reminds you that they and their memory could soon be gone.