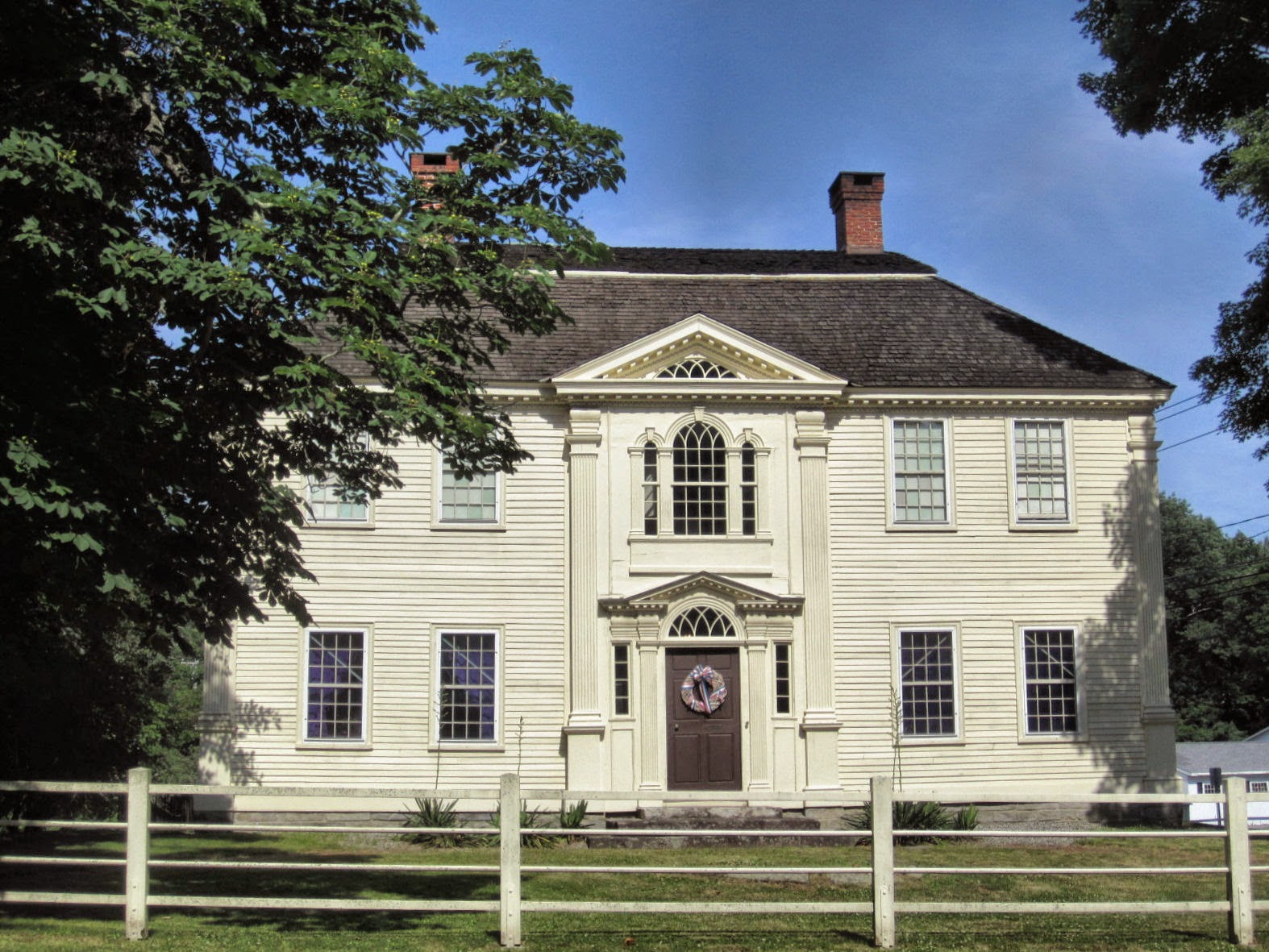 Prudence Crandall, born in 1803, was named Connecticut's State Heroine in 1995. I had left the state the year before, which may be why I never heard very much about Prudence when I was growing up. But even since then, I'm not sure that Connecticut makes a huge deal about her. We tend to be more enthralled with State Hero Nathan Hale, whose story is rather simpler. It's fairly easy to have a collective state-wide crush on that tall, wavy-haired Ivy grad who was so brave (and so endearingly inept) when he volunteered for his fatal mission behind enemy lines. It's more complicated to deal with the prim-looking Canterbury schoolteacher who Connecticut essentially bullied across state lines for daring to stand up for the principles we now all recognize were obvious.

And then there's geography. The Nathan Hale Homestead in Coventry may be in the middle of nowhere, but the Prudence Crandall Museum is at the far edge of nowhere. Have you been to Canterbury? Have you been there on purpose?

But instead of writing about how Canterbury is close to just about nothing, I'm going to write about Prudence Crandall. Because if anyone doesn't know her story, they should.

Born into a Quaker family in Rhode Island, Prudence studied subjects usually reserved for boys at the time, like math, science, and Latin. In her late 20's, she opened a private academy for girls at her home in Canterbury, where she passed on her knowledge to the daughters of wealthy local families. It went quite well initially, and then Prudence admitted Sarah Harris, a young black woman, as a student.

This gave her white students' parents fits, and when Prudence refused to kick Sarah Harris out of her school, they withdrew their own children. Prudence, undeterred, simply changed her mission: she would now run a school for African American girls. The fat cats of Canterbury were not pleased.

"The four most prominent men in the town of Canterbury arranged a meeting in which they told Crandall that they were intent on destroying her school. The men objected to educating African Americans in their hometown and felt it might lead them to believe they were equal and to interracial marriages." They then held a town meeting - at which Prudence, being female, was not allowed to defend herself - where they voted against the creation of the new school.

Prudence, instead of being terrified into inaction as many women (and men) would be in that situation, continued with her plans, opening her school in 1833. Soon, girls from free and affluent black families were traveling to Canterbury to study "reading, writing, arithmetic, grammar, geography, history, philosophy, chemistry, astronomy, painting, music, piano and French." Townspeople yelled at them and threw "stones, eggs, and manure" their way when they ventured outdoors. Local merchants would not sell school supplies to the academy, the Congregational Church would not allow the black students to attend services, and some townspeople went so far as to poison the water in the school's well.

Far-flung abolitionists supported Prudence Crandall's work, but Canterbury representatives got the state legislature to pass the so-called "Black Law," making the education of out-of-state African Americans in Connecticut illegal. Prudence was arrested and briefly jailed, but although she eventually won the case on a technicality, her school was attacked, with windows and furniture smashed, by a mob of what Prudence's husband Calvin Philleo called "midnight ruffians." Only at that point did Prudence decide, for the sake of safety, to close her school. She and Calvin soon moved to New York, then Illinois. After Calvin's death, Prudence moved again, to Kansas, where she remained for the rest of her life.

The "Black Law" was repealed in 1838, and in 1886, the state of Connecticut - spurred on once more by the people of Canterbury, who now felt ashamed - awarded Prudence Crandall a pension.

I don't think about Connecticut's State Heroine very much, but I should. Her story forces you to ask yourself: do I fight for what is just, for what I deeply believe in? I don't, not really. Because I'm tired, and because it seems so futile, and because I'm afraid everyone would unfollow me on Twitter. Quite pathetic by any measure, but certainly extremely pathetic when compared with Prudence Crandall.

While researching this post, I typed "Prudence" into Google and, assuming it would auto-fill the "Crandall, Canterbury, Connecticut" part (Google knows me pretty well by now), I lazily clicked the first term that came up. I ended up staring at the dictionary definition of prudence, i.e., "the quality of being prudent." Synonyms for prudence include: wisdom, judgment, sense, caution, care, and circumspection. It occurred to me that Prudence, though certainly wise, had little of the other qualities we associate with being prudent. Surely a cautious, careful, sensible early 19th century woman would avoid getting on the wrong side of the most powerful men in her town and state, and would not risk having her house attacked, her livelihood destroyed, and her well poisoned. So thank you, Prudence Crandall, for the reminder to be less prudent now and then.
Posted by Johnna Kaplan at 4:30 PM