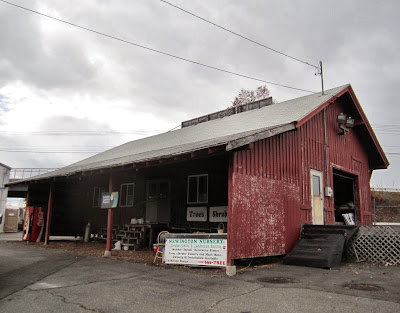 Unfortunately, the reality of these three tiny adjacent historic districts was a lot less exciting. Well, frankly, not remotely exciting. Just a few old houses that you wouldn't notice at all if you weren't trying very hard to justify driving to this rather bleak section of Newington. In fact, the triple historic district makes the waterfall look spectacular. After the twenty seconds or so that it took for me to become thoroughly underwhelmed by the intersection of Willard and West Hill, the only thing I could think to do was find the historic Newington Junction Railroad Depot. I knew it was somewhere in Newington Junction, and there was at least a chance it would be more interesting than what I'd seen of Newington Junction so far.

After driving around in circles for a bit, I took the above photo of the structure Wikipedia claims is the Newington Junction Railroad Depot building. It didn't really look like a train depot to me. It looked like a nursery in the middle of an abandoned industrial park. When I stopped to take this picture, there was no one around, but the minute I got out of the car some guy showed up (this always happens; go take pictures of random places and tell me I'm wrong) and started whistling at me. Not like "Hey, sexy lady!" but like "If you don't get out of here I'm going to scoop up your car in my front loader. Also for unknown reasons I am incapable of using words so I will communicate with you as if you were a recalcitrant cat."

So I don't know. I'm going to say the depot could be this building, but it could also be a building in an area that is currently off-limits due to CTfastrack construction. When in doubt, blame the Busway, right?

Update - 4/25/15: This is (as I suspected) not the real Newington Junction Railroad Depot building, which was (as I also suspected) concealed by CTfastrak construction at the time I went looking for it. Now that CTfastrak is up and running, the old depot can be seen at the Newington Junction station at 150 Willard Avenue. You can also see it on Wikipedia, which has been updated to include a photo of the actual depot.