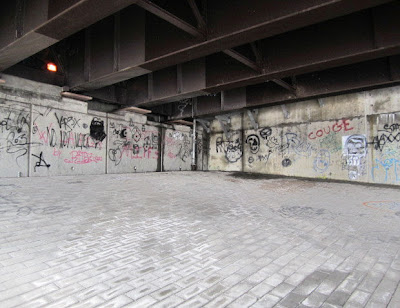 Sometimes, people are like, "can you drive me to Milford and then wait around for a while and then take me home again?" And I'm like, "OK, I guess I can walk around downtown and go into some shops and look at the duck pond or something." And they're like, "No, actually I have to go to northern Milford, up by the Merritt...but you can sit in the waiting room." And I'm like, "But I can't blog about a waiting room!" And then I look at a map of northern Milford and wonder to myself, what is up here, anyway?

The last time (OK, the only time) this happened to me, I stared at the blue stripe marked "Housatonic River" on the map for quite a while, wondering what to do with myself. Then it hit me. The Merritt crosses the Housatonic on a nice new-ish bridge, which replaced that old bridge with the terrifying metal grate that made it feel like you were driving across a rope ladder. Until it rained, and then it felt like you were driving across a rope ladder encrusted with ice. The new-ish bridge has a feature that confuses me every time I drive over it: a pedestrian walkway. Where might those pedestrians be coming from? I always wonder. And where might they be going?

Now, I could finally find out. Not the most scintillating activity in the world, but better than sitting in a waiting room. I drove to the Stratford side, near the Sikorsky building and the bizarre Boothe Memorial Park. The toll booth in that park once stood on this stretch of Parkway. (There is also a Merritt Parkway museum in a shopping center on this side, and CTMQ is on it.) 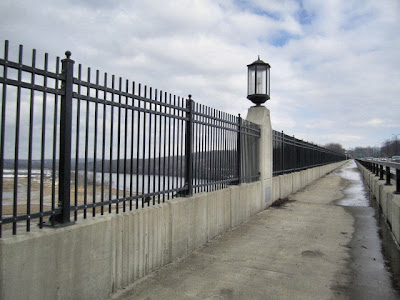 This is the Sikorsky Memorial Bridge. To get to it I followed the Sikorky Estuary Walk, which sounds lovely, but isn't. Maybe it's different in nicer weather, but in winter it's essentially a paved path with a large backyard on one side and an industrial-wasteland-slash-construction-site on the other. I was the only person on the Estuary Walk as it wound along past what looked like the place the DOT throws old road signs they don't know what to do with. Across the river a plume of white rose from a smokestack, and a MetroNorth train clattered by. Sirens wailed somewhere off in the distance, I didn't know where, I could no longer see the road. A helicopter hovered in the sky. The path curved under the highway, which rattled ominously as cars passed overhead, and led me to the little graffiti-covered corner above.

The Housatonic is gorgeous in places, excessively so sometimes, as if trying hard to compete with the State's better-known eponymous river. But not here. I made a note to remember this desolate, noisy place if I ever decided to take up a life of crime.

Eventually the walk circled completely around, past Sikorsky's fenced parking lot and onto the bridge. Now I was one of those odd pedestrians. I still didn't know why anyone would walk (or bike) along here, unless it was a part of a short, depressing commute. 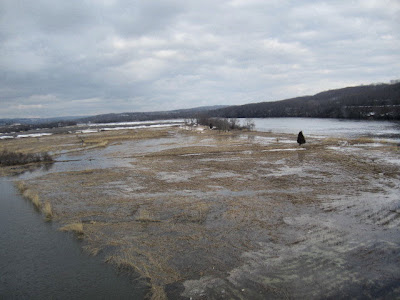 There are views of the river from up on the bridge. But it's not worth it. Unless you want to say you've walked over the bridge and you will never do it again. Then it's totally worth it.
Posted by Johnna Kaplan at 8:25 AM