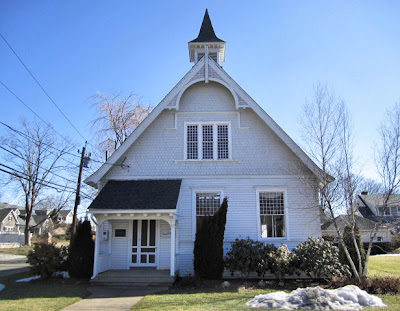 Someday, I will be able to identify on sight the architectural styles of Connecticut's various buildings, the little old ones and the big somewhat old ones and the simply unexpected ones. Until then, I will mostly just stare at them thinking to myself, Ooh, I should know this one, what is it? and then look them up later.

The Pine Orchard Union Chapel, in the Pine Orchard section of Branford, was built in 1897. (More info and a glimpse of the inside can be found here.) And while I was standing there staring at it, one phrase that did not go through my mind was "Queen Anne." How could one associate this endearing little building with that bizarre moment in the early 1700s when colonial troops massed to invade Canada but England never sent help so they just sort of waited around in camps spending money they didn't have and dying of disease?

But this era of Queen Anne architecture is not concurrent with the lifetime of Queen Anne or Queen Anne's War. It's a revival of sorts, which took off in the late 19th and early 20th centuries, and which looks quite different from the earlier style of the same name.