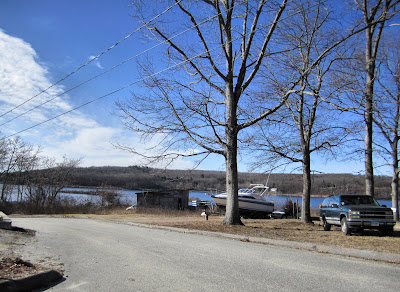 Melville wrote that true places are not down in any map. The reverse is also correct. Some places that are down in maps are not true, they're barely even places. Which brings me to...Happyland! (The ! is not a part of the name, I just can't stop typing it. Happyland!) Happyland is an "unincorporated community" or village in the town of Preston. Though I live twenty minutes away, I never knew it existed until a few weeks ago. Twenty Minutes From Happyland. It sounds like some awful movie, like something Julia Stiles would be in.

When I first saw "Happyland" printed there on the map I didn't believe it. Then I looked it up and although I found very little information, there was enough to determine that this was in some sense a legitimate place. People lived there. And I could go there. So I did. Sadly, Happyland, which juts out between the Thames and Poquetanuck Cove, has no welcome sign. I understand why they don't; I wouldn't want people like me traipsing through the village looking for the sign either. It doesn't have much of anything, to be honest. There's a gas station, and a place called the Fish Connection. And there are houses - not fancy houses, as my brief attempt at Happyland internet research had suggested, but small-ish, average houses, houses that could be anywhere. Except that these ones are in Happyland. "Island In the Sun" came on the radio as I drove across the river, and Happyland does have a slightly isolated, island-y feel to it. It must be a very quiet place to live. I slowly drove its few residential streets and a cat, lolling in the road, jumped up in surprise as I approached.

So, I've been to Happlyland. And that's why there's a picture up there of where the road runs out at the edge of a perfectly ordinary-looking neighborhood with a pretty view.
Posted by Johnna Kaplan at 7:58 AM