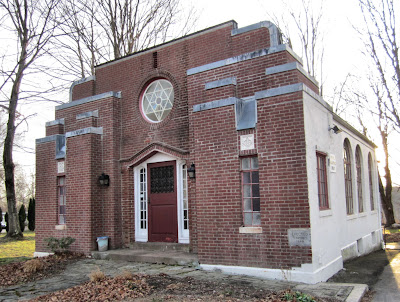 It's always nice, when driving through rural America, to unexpectedly come across evidence of Jews. I actually knew of this synagogue in Hebron before, but I'd completely forgotten about it and I certainly wasn't expecting to see it there, looking much older than its 71 years. (It might be the oldest-looking Art Deco building I've ever seen. They're usually so...shiny.)

The man who built it was not a chicken farmer, but a grain mill owner (among other things, but that goes without saying; with all Jews of the early 20th century, and other times, there are always other things.) And when I say he built it, that doesn't mean what it usually means, that he merely paid for or commissioned it. It means he built it, including collecting the bricks and glass.

And as far as I can tell, it appears to still be a functioning synagogue, which also surprised me. You know you spend too much time in New England when you're surprised to find actual Jews in a place called Hebron.
Posted by Johnna Kaplan at 8:24 AM