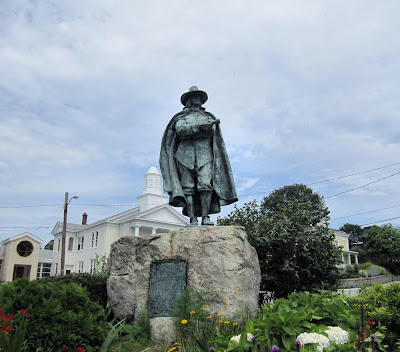 If someone had told me twenty, ten, five years ago that I would be reading books about Connecticut history even partially for pleasure, I'd have looked at them like they were out of their damn tree. Yet here I am, having just finished Walter W. Woodward's Prospero's America: John Winthrop, Jr., Alchemy, and the Creation of New England Culture, 1606-1676, and found it completely absorbing. I first read part of this book when researching John Winthrop, Jr. for this column, and finally got around to reading all of it. The early New England world it presents is one of strangeness, and wonder; its people are curious and terror-filled and petty and not at all the one-dimensional bores in funny clothes that have since gotten attached to the word "Puritan." Between the alchemy, Indian wars, religious disputes, creepily specific accusations of - and pointed denials of - witchcraft, and frightening medical treatments, it evokes a time that feels more distant than 400 years past. But other things, like the Colonists' worrying about their children's health, or Winthrop's brilliantly passive evasion of his Royal Society bosses, could be almost current. One thing that struck me was how quickly - and seemingly unconsciously - these English people became New English. It was almost as if something in the landscape made them want turn American without knowing it, the same way - as Woodward says in a different comparison - "all metals aspired to become gold."
Posted by Johnna Kaplan at 9:08 AM